The small Western African country of Benin (formerly Dahomey) has had a turbulent post-colonial history. Since gaining independence from the French in 1960, the country has experienced various forms of government, coups, periods of military rule and ethnic strife. A number of politicians rose and fell from power in a series of coups between 1960 and 1972.

On October 26, 1972, the army led by Commander Mathieu Kérékou overthrew the government, dissolved its governing bodies and suspended the constitution. In November, 1974 he announced that the state would be Marxist-Leninist, and banks and the petroleum industry were nationalized. In 1975 the country was renamed the People's Republic of Benin.

Francis Terry McNamara was the Deputy Chief of Mission in Cotonou, Dahomey, from 1972 to 1974.

To read more about Africa. "I remember his saying, "'Oh, no, it won't happen. That's nonsense.'" 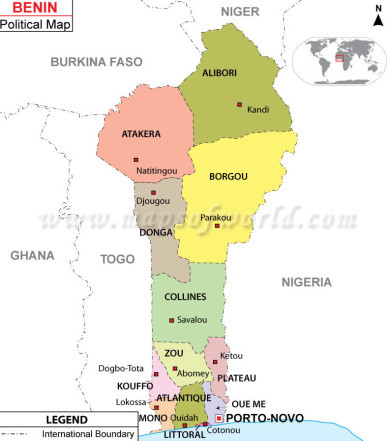 The people in the south of the country are well educated by African standards. In fact, Dahomey was called the Quarried Latin of Africa because of the number of intellectuals the country had produced. It's a funny little country. It's very much like Nigeria in microcosm, divided into three major regions-the east, the west, and the north. The basis of the divisions is tribe and religion. In the east, there is a tribe, centered on Porto-Novo, the old capital of the country, which is an offshoot of the Yoruba in Nigeria. In the west, you have the Fon tribe. The traditional kingdom of Dahomey was based on the Fon tribe....

Muslims dominate in the north. They are closely allied to the Hausa in Nigeria. Because of these ethnic and religious divisions, the country remains very unstable. Indeed, there had been eight or nine coup d'etats during the 12 years since independence in 1960.

I went out in September of 1972 and went to the Quai d'Orsay to talk to the man who was in charge of Africa. He said that the French were very worried, and that they'd had indications of an impending coup d'etat in Dahomey.

Ambassador Anderson pooh-poohed this. I remember his saying, "Oh, no, it won't happen. That's nonsense."

I told my colleague at Embassy Paris he should report our conversation.

He said, "But the Ambassador doesn't agree."

I rejoined, "Well, maybe not, but surely the French have excellent sources in Dahomey. Just to be on the safe side, I would report it." So he said, "Yeah, I think you're right." As far as I am aware, he reported the coup prediction. The Department, therefore, was not caught unawares when the coup later took place.

[Cotonou] was a dusty little town with large numbers of unemployed. A well-educated population, certainly by African standards, yet not enough jobs for the educated who had completed a good lycée education. Some of them had even finished university in France.

There just weren't any jobs for them. This was a major factor in the country's chronic instability. Not only were there serious ethnic and religious differences, but there was a large group of unemployed, educated, unhappy people in the capital.

To try to deal with the chronic instability and the fractiousness of the country, the Dahomians had decided upon a bizarre system of government. They chose three presidents representing the three major divisions of the country. These three formed a collective executive. The position of head of state rotated among them.

Each one came from a different region: the east, the west, and the north. I'm not sure, but I think the northerner had already served his term as chief of state, and at this point, Ahomadégbé, from the west, was the chief of state.

Ahomadégbé invited us to visit the old Fon royal capital at Abomey. Suddenly Ahomadégbé came to us and said, "You've got to get right back to Cotonou. It looks as though there's going to be trouble. I don't want anything to happen to you. Get in the car and go right now. I think I can protect you. You'll be all right if you leave now and get back to Cotonou."

So we left in a great hurry. The high speed drive back only took about two hours.

"That was the beginning of the coup. I had a ringside seat." 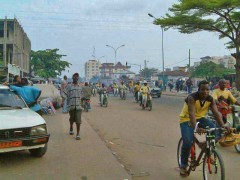 It then became obvious that there was a real threat of a coup d'etat. In any case, these things had happened so often in the past that it should have come as no surprise to anybody that there was likely to be another coup d'etat in Dahomey. Nothing happened for a day or two.

I was returning from lunch on a side road. When I came to the main road that came from Ouidah and the Togo border, there was a small military convoy passing. I waited till they passed, and I pulled in behind them. An officer in a Jeep at the end of the convoy made signs to me to slow down and stop.

As we were driving along, the head of the convoy came abreast of the presidential palace. Suddenly, the lead armored car turned to the right, into the driveway going into the palace, broke through the big wrought-iron gates into the grounds of the palace, and started firing machine guns. That was the beginning of the coup. I had a ringside seat.

I was right there; I saw the whole thing happen. There was some shooting back, but not very much. I waited until the shooting died down. Then I went to the embassy and told the Ambassador. He was immobile having injured his leg playing tennis.

I then sent a cable alerting the Department of the coup. It was a classic coup. The streets were empty and martial music was being played on the radio. Anderson couldn't leave his house, so I brought information and draft messages to him before sending them to Washington.

Finally, we were getting no new information and were without a clear idea of what was happening. I told Anderson that I thought I should do a reconnaissance around town. I was used to such things from Vietnam, Elisabethville and Dar es Salaam. He agreed.

"You may take my car and driver," he said.

I got the chauffeur to put the American flag on the car because driving around town, I wanted to be sure the car was clearly marked to avoid somebody shooting at me.

We drove around town very slowly. The roads were empty aside from soldiers manning road blocks or guarding government buildings. None of them bothered us. They were nervous when they stopped us, but they didn't bother us.

When I returned to the embassy, Anderson found out that I flew the flag on the car. He was furious.

"Only the ambassador has the right to fly the flag!" He shouted making a complete ass of himself.

I explained as calmly as I could why I had used the flag. He finally quieted down. Really childish. But, anyway, that was his way....

I suppose I am one of the few people who worked for him who has ever gotten along well with him. He needed me, and I tried never to be threatening. I did all the work, while he played tennis. He also absented himself from Cotonou as often as possible. He didn't want to be there, really....

Dahomey is geographically next to Nigeria, and Nigeria was important to us because of its oil. Moreover, it is the biggest country in black Africa. Nonetheless, nothing in Black Africa is of great interest to the U.S.

"They wished to break the neo-colonial connections with the French, and, by extension, with us"

Q: Did you have any problems reestablishing contact with the new ruling people and all that?

MCNAMARA: Not a great deal. However, this was a new group. This coup was a little different from the previous coups, because it was staged by relatively junior officers in the military. Previously, the coups had been staged by the senior officers.

This time, people who were unknown to us, or to anybody else, had suddenly come up from the ranks and staged the coup. 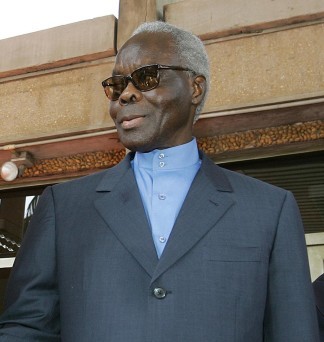 There were two principal coup makers: one was the captain of the lone parachute unit in the small Dahomian army, and the other was the commander of the armored-car unit. Both were young captains and had been at Saint-Cyr, the French military academy.

They were very much different from the kind of people who had staged the previous coups-the old boys in the army, who were mainly former sergeants from the French colonial army who had been commissioned just prior to independence.

Obviously, when they formed a national army, these were the only people who were available to officer it. But these younger men, who had had a proper military education, looked down on the more senior people, whom they saw as uneducated, unsophisticated, and coming from a colonial tradition.

Oddly enough, neither one of the captains assumed top leadership. Precisely why, I'm not sure. They put a man named Kérékou in as president. He was involved in the coup, but was not, as far as I know, one of the principal initial leaders of the coup.

He was put up as the front man, because he may have been the most senior person involved. Also, he was a northerner while the two captains were from the south. Kérékou was a major and had been a sergeant in the colonial army. The two captains became ministers; they and a lot of other young officers took over portfolios as ministers.

The regime started getting more and more radical. Some of the young officers were Marxists, or at least interested in Marxism. They wished to break the neo-colonial connections with the French, and, by extension, with us.

The French, however, were the principal target. The French still had tremendous leverage in Dahomey. Among other things, they supplied a subsidy to the Dahomian government. Without that subsidy, it was difficult to run a country in chronic deficit. To meet civil service payroll, they often had to ask for help from the French.

Anyway, the regime became increasingly radicalized, and Kérékou showed more and more signs of being unstable. Surprisingly, he began to emerge as the clear leader of the government. He assumed more and more personal power. The young captains and their friends who had organized the coup were on the decline.