By the 1970's, South Africa's majority black communities were sick and tired of Apartheid's oppressive policies, which led to an increase in violence, protests and militant activity. However, not all organizations and group efforts to fight apartheid involved violence. In 1974, the South African regime passed the Afrikaans Medium Degree which required all black schools to use and teach Afrikaans as much as English. Because the language of Afrikaans was strongly associated with apartheid, black South Africans preferred their indigenous languages or English to Afrikaans. Opposition to this decree prompted black students to organize a peaceful rally on June 16, 1976 in the township of Soweto, located in the nation's capital, Johannesburg. 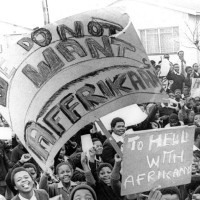 Between 100,000 and 200,000 students marched peacefully through the streets of Soweto, carrying banners and chanting for freedom from oppression. Though the protests began peacefully, they quickly became violent as police officers began to massacre and harm hundreds of students gathered. The amount of casualties is unclear, with numbers ranging from 100-700 people dead and thousands injured. Many saw the Soweto Uprising as a turning point, signaling the sure end of apartheid in the near future. Today, South Africa remembers the events of June 16th and commemorates the lives of the lost students through a public holiday called Youth Day.

This account was compiled from interviews done by ADST with William B. Edmonson (beginning in 1988), who was Deputy Chief of Mission in Pretoria from 1974-1976 (and later Ambassador to South Africa), Harvey F. Nelson Jr. (2000), the Deputy Chief of Mission in Johannesburg from 1976-1979, Monica Joyi (2009), a Black South African woman who worked at the U.S. Consulate in Cape Town from 1975-1995, and Peter David Eicher (2007), a political officer in Pretoria and Cape Town from 1976-1978. You can read the entire account on ADST.org. EDMONSON: My belief was that major changes inevitably had to come to South Africa. The question was how they would come about, and how much violence would be involved. I had developed over time a theory that has been picked up in a few academic circles, of what I called South Africa in the process of "violent evolution."

Looking back to Soweto and other events, there were changes... Things had already changed even from my first period there, when I took my daughter on one of her vacations from college to see the post office in Cape Town, where there were separate counters for Whites, Blacks, and Coloreds just to get stamps or money orders. It looked like a railroad station with different trains. Even a bench would be divided, with one end of the bench marked for Whites only, in Afrikaans, and the other for non-Whites, nieblunk. That had disappeared.

You could argue that that wasn't significant change; in any political sense that was certainly true. But change had been occurring, and there was an acceptance of change. The theory...of "violent evolution" was that there were periods of adjustment and readjustment. Soweto was an excellent example. The outbreak, of course, was over the enforced teaching of Afrikaans to all Africans in Soweto, and the strike against that by young people, and one boy was killed, and then everything broke loose.

All kinds of grievances came out. You saw people, then, wringing their hands, even the very liberal White South Africans who were very concerned about apartheid, who wanted their government to move much, much faster, were also very concerned about this violence. You could see how they were being torn apart by this as they watched these things for the first time on television, which had for a long time been prohibited but came to show this kind of news, so people saw what was happening in their country.

NELSON: This was the beginning of the end. Even the white regime recognized then that it had to do something. When I was Deputy Director of Southern Africa Affairs, I went out on an orientation trip to South Africa. I was full of missionary zeal to get rid of apartheid, not understanding the situation at all. I participated in many discussions lasting well into the night with both blacks and whites.

One old white Afrikaner said to me, in the wee hours of the morning, that I was absolutely correct that apartheid could not survive, but that that wasn't his problem. It would be his grandchildren's problem.

JOYI: I had a voice...as a young adult and I saw other young adults around me, who were also actively involved in politics. The high school I went to was always involved in protest marches, boycotts and demonstrations; and there were several other schools around the country, but Livingstone is the one school that stands out as it had a long history of activism since its inception in the 1940s and the culture of activism was instilled in us from home to school and in the community. 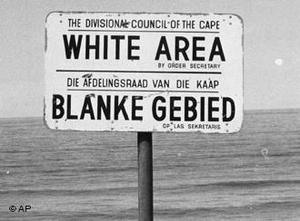 Q: Many of the demonstrations, the expressions of the need for change, originated in Cape Town.

JOYI: In the 1940s, 1950s already, yes, but generally throughout South Africa, and especially in the Eastern Cape. However, if you look back to 1976, I think that was also a turning point where young adults realized this the era of oppression was going on for too long but...the Soweto Uprising...came at a point where we had a youth who were not only militant but they were determined that something needed to give and some reality needed to set in...

It was about time too because many of our parents had gone through this oppression, and suffered and the next generation had also gone through it and so it was the third wave or phase as I call it in the 1970s, when 1976 happened. But what is also important to remember is that while the student protests started in Soweto, it spread to the entire country, thus between 1976 up to the early 1990s South Africa was never the same again.

EICHER: Officially called "separate development," Apartheid affected all facets of life - where people could live, or work, or eat, or go to school or to the movies, even what public benches they could sit on. It was accompanied by a strict "pass system," under which blacks were officially not citizens of South Africa.

Instead, they were assigned on a tribal basis as citizens of small, unviable "homelands" or "Bantustans," even if they had lived all their lives in a South African city. They weren't permitted in "white" areas - most of the country - without a pass; if they didn't have a pass they could be arrested and deported to a "homeland" that they might never even have visited before....

The theory behind apartheid was that if you could assign all the blacks to be citizens of these little, independent countries that would be created, then the whites would be a majority in South Africa and the blacks would have their own little countries, where they could enjoy all the same rights and privileges that whites had in South Africa. This was a pipe dream, of course...

The Soweto riots of 1976 were the start of a very long period of serious urban unrest in South Africa in opposition to the system. It was the first sustained, widespread, black action in opposition to the regime. There had previously been race riots in Soweto around 1960, but they were very short-lived. The unrest following the 1976 Soweto riots continued for my entire tour of duty, on and off, and led to sharp crackdowns and further restrictions of civil liberty, the arrests of lots of leaders, and the banning of lots of organizations. After the riots in Soweto - a suburb of Johannesburg - broke out, rioting spread to other townships, or segregated suburbs, all over South Africa.

The feeling from the outside was that the situation was completely intractable and at some point it would explode or implode and you would have, indeed, an extremely bloody revolution on your hands. 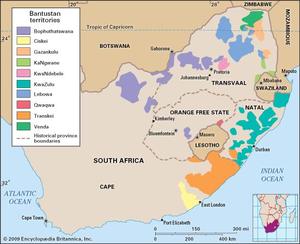 Of course, a low-level violent opposition was already underway through the African National Congress (ANC) and the Pan-Africanist Congress (PAC), the so-called liberation movements, but generally the security forces had these well in hand; the liberation movements were winning the battle of public opinion in the UN and outside the country, but they were not effective within the country.

Our view at the embassy was more restrained. We knew the riots were serious and were an indication of the inherent instability built into the system, but the overwhelming preponderance of power was still with the whites; the rioters weren't going to be able to topple the government and its security apparatus, certainly not in the short term.

However, there was already starting to be the first signs of a split in the Nationalist Party, although "split" is probably too strong a word. The party was still solid, but what was happening was that a group of younger and more enlightened Afrikaners were emerging as a new generation within the Nationalist Party, who realized that they had a big problem and didn't have the answer. They were not going to be able to corral the black population into Bantustans and have that be an effective policy.

These younger politicians, many of whom were already members of parliament for the National Party, but were still backbenchers, not actually in positions of power, were called the "verligtes," an Afrikaans word meaning "enlightened," and we hoped and believed they represented the future of the Nationalist Party.

On the black side, beyond the ANC and PAC, you saw a very strong sense of "We want our share, we want our rights, we want justice," but, surprisingly, this was not coupled with a strong desire for revenge or retribution, as you might expect. There was a whole new black political movement emerging out of the Soweto riots, the so-called "black consciousness movement," which was an internal opposition that continued to crystallize. 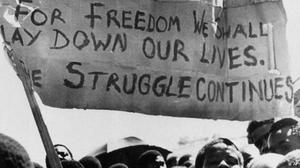 Most of the leaders of the ANC and PAC were in exile or in prison. They were becoming increasingly irrelevant as a new, younger leadership emerged within South Africa. Steve Biko was perhaps the best known name among them but there was a very large group of younger generation people in all the townships around the country who were emerging into informal political leadership positions...

There was indeed a danger of a very bloody revolution in South Africa, but at the same time we saw that the combination of the young Afrikaners looking for solutions and the moderate blacks who were not seeking vengeance might still provide an opportunity for a peaceful way out. Even then we could see that as a possibility, so contrary to the general outside impression, it did not seem to us at the embassy that it was a hopeless case, bound for major bloodshed.