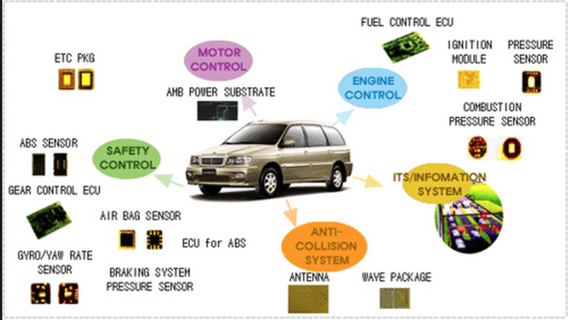 Imagine this: you're driving down the road, on a beautiful sunny day. Suddenly your windshield wipers turn on for just a few seconds and then go off. You prepare for the worst to happen, but everything continues on normally. A few days later, the same thing happens, and this time a few of the warning lights on the dash board come on at the same time. Again, it all goes away after just a few seconds. Now you're sufficiently concerned that you take the vehicle to the shop and they tell you they can't find anything wrong, and all of the vehicle systems are operating correctly at the moment. What happened?! You saw your car have a mini panic attack with your own eyes! Welcome to the modern age of computerized driving.

In the above scenario, the cause would be only a few things. There's either an intermittent electrical problem (a corroded ground wire, damaged signal wire, etc) or, more likely in this case, a defective control module. The majority of the functions that your vehicle is capable of are now operated with a controller. The days of just a few modules and a good amount of sensors and switches are gone. Now there are control modules for a variety of the most popular features that current vehicles have. Do you enjoy the rain sensing wipers on your car? How about the electrically folded away seats in your minivan? Both of those functions are controlled by separate computers. Even the doors have their own module now that controls the functions of the power window and door lock for that particular door. All of these are pretty amazing features to those of us who remember when it was a big deal to have a cassette player in your new car, but what does that really mean to you as a consumer?

Until the late 90's/early 2000's, vehicle computer technology wasn't really keeping pace with the rest of the computer industry. For most vehicles there were still just a few main computers, and the rest of the electronics were operated the old fashioned way- a switch/sensor that controlled whatever you were trying to use. Then in the early part of the 2000's, the auto industry started to change. Auto makers realized the immense potential that the advanced computer technology could afford them. It would now be possible to do things such as: turn off some of the cylinders of the engine when they weren't needed, apply the brakes at a single wheel to prevent the vehicle from rolling over during a high speed turn, or to have a GPS guide directly in the dash of the vehicle.

The advancements in on board technology have truly been amazing, and continue to get better, seemingly every year. There's a catch though: the cost of having luxury isn't cheap. You say you didn't buy the luxury model? Actually, you did. The base model car in the mid 90's had at most 2-3 modules in it. Some even had just a PCM, Powertrain Control Module, in it. This module is responsible for all of the basic engine functions. You'll know it better as the module that turns on the check engine light. For more about the problems that arise from a check engine light, visit mycheckenginelight.net. The luxury model could reach up to 8-10 modules in some cases. Fast forward to now, the base model vehicle being manufactured has a minimum of 5, and can be up to 8-9. The luxury model usually has at least 15, at a minimum, and I've personally seen as many as 30 control modules on a single vehicle. Now comes the best part- the price.

Each of these control modules is an actual computer with a circuit board in it, just like the device you're using to read this article right now, and range in price from $300-$2000. To be fair, the $2000 modules are normally only a Diesel engine controller or your navigation radio. So the actual price range, when you take those 2 things out of the equation, is $300-$900. If you assume a median price, that would put you at $600 per module, and to be completely honest, that's just about exactly right. Most modules that come equipped on your vehicle are $600, give or take $100, per unit. If your vehicle gets struck by lightning and fries 12 of those precious modules at once, you're going to have to come up with around $7,200 to get your vehicle back to the same condition it was in before. Sidetone: I'm using that as an example because I've seen that happen.

There's another aspect to consider, that price is only for the part. That doesn't cover diagnosis, or any wiring repairs that may be necessary to make the effected system whole again. When you start to look at the whole picture, you can begin to understand why electrical problems are so much more common, and why they cost so much more to fix. When you buy a new or used vehicle, it's becoming more worth it to pay the price for an extended warranty, because the parts and labor to repair even 1 failed module are generally close to $1,000, once you've added tax and any other miscellaneous fees. The auto industry, and your car salesman, aren't going to present this information to you. They'd prefer that you worry about potential repair costs AFTER you make the purchase. This is the future of the vehicles we drive, and it shows no signs of slowing down.

Auto repair blogger. Come see me and Skype with a mechanic!