With summer upon us let's face it the travel bug has likely gotten the best of you, right? No worries, since there's a place down south in Texas that has just the cure for warm weather fever and good fun.

South Padre Island, you'll know you have arrived when you cross the bridge and end up in paradise. Indeed, it's a place where the weather will make you smile. After all, with an average temperature of 65 degrees; breezy summers that average around 82 degrees and 253 days of sunshine who can argue with perfection. The South Padre Island area of Texas is the perfect place to enjoy activities such as bird watching, dolphin watching and an array of additional water activities from snorkeling to surfing to scuba diving to, even learning about the endangered sea turtle. 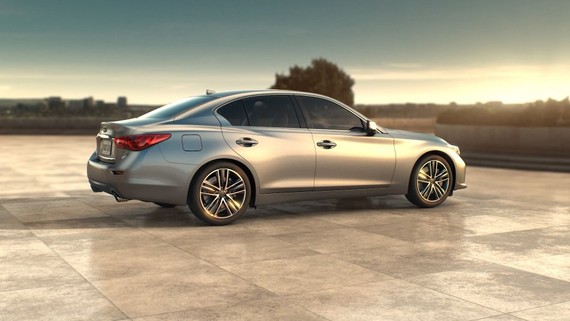 All new from the Infiniti folks too, the 2014 Infiniti Q50 is replacing the G37 sedan and with that it's an all new design and name along with new styling and technology. As an entry-level luxury sport sedan, the Q50 also comes in the hybrid version with the competition including the Audi A4, BMW 3 Series, Cadillac ATS and the Mercedes-Benz C Class.

Under the hood, the 2014 Infiniti Q50 has a 3.7-liter V6 engine with 328 horsepower and 269 pound-feet of torque. For the hybrid version there is a 3.5-liter V6 engine that works in conjunction with a 50-kilowatt electric motor running with a lithium-ion battery that puts out 354 horsepower. All the 2014 Q50s are automatic with seven-speed only.

Every Infiniti Q50 sedan comes standard with antilock brakes, stability and traction control, front side and side curtain airbags and a rearview camera. Many of the added features on the 2014 Q50 also touts safety depending on the packages with extras like the 360-degree parking camera system, front and rear parking sensors, adaptive cruise control, blind-spot/lane departure warning and prevention and a forward/back-up collision warning system.

While the 2014 Infiniti Q50 is a new design and name, this vehicle still continues to uphold the tradition of a classy cabin interior with high-end materials and either aluminum or wood accents. There is also plenty of room in the front and back seats and the seats are built for comfort as well. On the Sport trim the front seats even offer power-adjustable bolsters to create an even stronger positive driving experience.

So, driving around the tropical tip of Texas in South Padre Island you couldn't have more fun as you discover this 34-mile long barrier reef that is about half-a-mile at its widest point and bordered by the Gulf of Mexico and the Laguna Madre Bay. The only connection to the mainland is a two-and-a-half mile bridge, nevertheless there are about 5,000 inhabitants and as many as one million visitors sweep down on the island every year.

For the perfect weekend take a couple of good friends and plan on good food and beach time or outdoor activities with no interruption.

Start out by staying at a place called Padre Getaways offering apartment style suites with a kitchen so you can even cook your "catch of the day" if you must.

There's lot of stuff to do outdoors in South Padre, but begin your fun with a Sand Castle lesson at Café on the Beach.

The South Padre Island Birding and Nature Center (www.worldbirdingcenter.org) is another experience that visitors will not want to miss. Outside the center there is 4,800 linear feet of bay-view boardwalks and paths. In the end you can explore as much as 43 acres of freshwater ponds, island scrub brush and saltwater marshes. For the real birdie at heart, there are seven bird blinds to get up close and personal to one of the many species that come through this area throughout the year.

Home to many Sea Turtles in various phases of rehabilitation, Sea Turtles on South Padre located on Padre Boulevard is a non-profit sea turtle rescue center founded in 1977. There are a number of different species of sea turtles both endangered and threatened who call this place home, including the rarest, the Kemp's Ridley. Offering educational presentations, these folks try to release the turtles back into the wild when they can, however, some turtles seem to want to stay at the rehab center forever and that's okay too.

Eco Tours or a good dolphin watch experience is an option and you're bound to see one of the cute little creatures. Find one of boats that leave from the pier and you'll be fine for a day or half-day excursion.