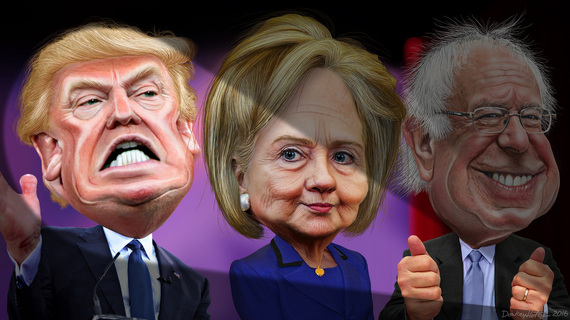 The 2016 election cycle in America has been unique, even by American standards. We are all witnessing the fascinating results of this unique political dynamic: a 74-year-old democratic socialist that is killing it with young voters, and a 69-year-old nationalist "billionaire" who poor and under-educated people trust to represent their interests in Washington.

Further, while Bernie Sanders and Donald Trump certainly have their differences, there are a few similarities that are so important to voters that, when in open primaries, many voters were deciding between these two candidates, regardless of party affiliation.

Since nobody paying attention could ever confuse Bernie with The Donald, this dynamic needs to be unpacked.

We've been led to believe that our two main national parties -- Democrats and Republicans -- create political platforms, and run and support candidates that they believe best represent their specific constituency of voters in the nation. In broad strokes, the Democrats have traditionally run on a platform of social liberalism and economic protectionism and the Republicans have run on social protectionism and economic liberalism.

These at-odds platforms, in theory, should cover most voters enough to suffice and ensure a representative governing body, right?

In math class, some of learned about something called combinatorics. It sounds fancy, but it's pretty straight-forward: it's a branch of mathematics focusing on countable discrete structures. In layman's terms, it's about figuring out how many variations can exist in a given system. Who would have thunk that combinatorics of all things can help us see what's missing in our mainstream political discourse?

If we look at the existing two-party political system, we have, in broad strokes:

Based on a combinatorics calculation, the combination of 2 items in a group of size 2, there are 4 possible permutations**. As a result, there are 2 combinations that are not addressed by existing political containers:

** For the sake of brevity and focus, we can't explore all the 16 permutations there would be if "moderate" was added as a dimension for each political dimension.

Now, let's map these political systems to the remaining candidates in the race:

Looking at this mapping, we have some seriously bizarre dynamics at play:

This helps explain what makes this race so unique: Officially, we have two parties running against each other, but in reality, we have three distinct parties competing with each other (and if Rand Paul were still in the race, then we'd have all four political combinatoric parties in the race.).

Trump and Sanders have become iconoclastic and share so many swing voters because they are both representing economic protectionism in their platforms. This tells us that there is a real hunger for economic protectionism, which, interestingly, is not where either the modern Democrat or Republican party is right now at the national level. This represents a crisis for the political elite who believe that long-term gain in free trade and unfettered capitalism outstrips the short-term pain.

The Trump and Sanders parallel phenomenons point to the reality that our major national parties aren't offering up enough diversity to satiate a significant proportion of the electorate. Bernie and Trump are live-action lessons for a free democracy: Where there's a political itch, a candidate will eventually come along to scratch it. And if that candidate wins, it can bring the party with them.