2015 was a great year for CGI-filled films such as Jurassic World, The Avengers: Age Of Ultron and of course Star Wars: The Force Awakens. One would say "It's not possible to sneak in any more huge-budget films in one year." 2016 laughs. We haven't yet realized how crowded with blockbusters the next year is going to be. I would fear for the indies, but at least they have The Academy.

Here is a list I compiled with the most likely contenders to break the 2016 box office (domestically and internationally):

OCTOBER
7th: The Girl On The Train
21st: Underworld 5

NOVEMBER
4th: Doctor Strange
18th: Fantastic Beasts And Where To Find Them

In this list I focused on films with a great amount of budget. I can't possibly predict every movie that's going to become a blockbuster next year. With star-studded films like We Are Your Friends having one of the worst box office openings in history, I decided to only mention the safest picks of 2016.

I created a (gigantic) poster pinpointing these dates. You are not able to see it in full resolution here but if you click on it, you can check it out, save it or share it. 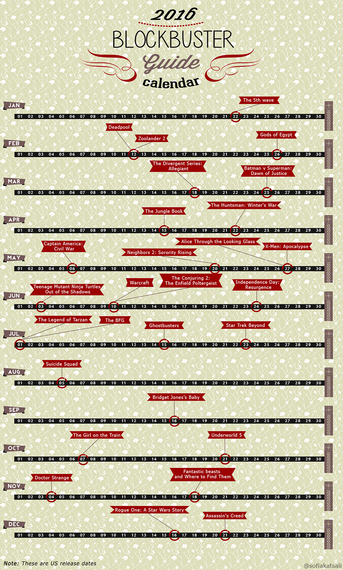 The poster doesn't include the long-anticipated animated films, Finding Dory and Kung Fu Panda 3 which are going to definitely crash the box office. I also skipped the upcoming Untitled Matt Damon/Bourne Sequel since it doesn't have an official title yet and the official US date has changed a couple of times.

With the movie ticket prices increasing at a steady rate and hitting a record high in 2015, 2016 is going to be a tough year for every faithful movie goer's wallet. I know it's going to be hard for mine. I've already sent my virtual goodbyes to a lot of Saturday night outs, new clothes and my emergency fund. But honestly, who cares. The freaking Marvel Civil War is coming.

Sofia Katsali is a Social Media & Online Community Manager, Co-Founder of the non-profit organization Echelon Donates & a Computer Science final-year student. She has been interviewed by MTV Act for her online charity work and has a great passion for all things digital, entertainment and design. You can find her in Linkedin where she occasionally shares her personal experiences.