On April 25, 1993, I stood on the main stage, fatigued beyond words and in utter amazement at the ocean of people spread across the D.C. Mall for the March on Washington for Lesbian, Gay, and Bi Equal Rights and Liberation.

The D.C. police estimated that there were between 800,000 and more than 1 million attendees. (The park police's estimate was so ridiculously off that they became the butt of editorial cartoons and shortly thereafter stopped issuing any official estimates for events.)

I was 27 and had served as one of four co-chairs for the event after volunteering locally to help organize. I was elected as a local delegate to the state, and then a state delegate to the national organizing committee. Finally, four of us were elected as national chairs, and I took on the role of ensuring that we had media coverage. Previous marches had gotten scant attention, and we were determined to force the issue.

We began organizing more than a year earlier, with the continuing neglect of HIV and the sting of Bowers v. Hardwick still present. It was pre-Internet, and we relied on direct mail, word of mouth, phone trees and local bookstores and organizing teams. We rolled our eyes at the few organizing committee members going on and on about electronic bulletin boards and something call America Online.

Then, suddenly, a guy from Arkansas named Bill Clinton began to surge in the polls, and he used the word "gay," and he said he'd get rid of the military ban, and a bunch of other things that inspired hope. President Clinton's election turbocharged our efforts. People who wondered if another march was worth it were coming to D.C. to protest and celebrate what looked like the dawn of a new day.

There are many stories I could tell about the death threats, sitting in the Oval Office talking with the president, shutting down traffic in DuPont Circle as we tossed freshly printed program guides off the back of a flatbed truck at midnight or a Saturday Night Live skit that turned out to be my coming out to a whole bunch of people. But the one I want to tell here is about the fights.

We fought over the inclusion of the word "transgender." We battled over the racial parity requirement of state delegations. We even fought over whether an Oxford comma belonged in the title of the march. But mostly we wrangled over what should be included in the platform of demands. Now, some were (and likely still are) dismissive of all that processing, but for me it was an advanced course in organizing, consensus building and listening to diverse voices even when -- especially when -- it is hard. It also taught me the power of a bold and inspirational vision that guides me to this day. We should think big in a world that tells us from birth to be small and invisible to survive. We should walk the walk even when it means a longer, more treacherous road, because it gives us the moral authority to demand that others take the harder road to walk with us, as well.

So, 20 years later, how close are we to those aspirational goals set down by a process that gave grassroots activists, wealthy donors and national organization leaders an equal voice in the planning?

Here are the primary demands, followed by the full platform:

Full Platform of the 1993 March on Washington for Lesbian, Gay, and Bi Equal Rights and Liberation

Action Statement Preamble to the Platform

The Lesbian, Gay, Bisexual and Transgender movement recognizes that our quest for social justice fundamentally links us to the struggles against racism and sexism, class bias, economic injustice and religious intolerance. We must realize if one of us is oppressed we all are oppressed. The diversity of our movement requires and compels us to stand in opposition to all forms of oppression that diminish the quality of life for all people. We will be vigilant in our determination to rid our movement and our society of all forms of oppression and exploitation, so that all of us can develop to our full human potential without regard to race, religion, sexual orientation/identification, identity, gender and gender expression, ability, age or class. (April 25, 1993)

1. We demand passage of a Lesbian, Gay, Bisexual, and Transgender civil rights bill and an end to discrimination by state and federal governments including the military; repeal of all sodomy laws and other laws that criminalize private sexual expression between consenting adults.

Repeal of Department of Defense directive 1332.14.

Amendment of the Code of Federal Regulations to recognize same-sex relationships.

Passage of the Equal Rights Amendment.

Implementation of, funding for and enforcement of the Americans with Disabilities Act of 1991.

2. We demand massive increase in funding for AIDS education, research, and patient care; universal access to health care including alternative therapies; and an end to sexism in medical research and health care.

The provision of responsive, appropriate health care for people with disabilities, deaf and hard of hearing people.

Revision of the Centers for Disease Control definition of AIDS to include infections particular to women.

A massive increase in funding for AIDS education, research and care -- money for AIDS, not for war. This money should come from the defense budget, not existing social services.

An increase in funding and research to provide an independent study of HIV infection in women, People of Color, Bisexuals, Heterosexuals, children, and women to women transmission.

A cure for AIDS.

The development and legalization of a national needle exchange program.

The re-definition of sexual re-assignment surgeries as medical, not cosmetic, treatment.

The provision of appropriate medical treatment for all transgendered people in prisons and hospitals.

An increase in funding and research for chronic illness, including breast ovarian, and other cancers particular to women.

The right of all people with chronic illness, including HIV/AIDS, to choices in medical treatment as well as the right to end such treatment.

3. We demand legislation to prevent discrimination against Lesbians, Gays, Bisexuals and Transgendered people in the areas of family diversity, custody, adoption and foster care and that the definition of family includes the full diversity of all family structures.

The recognition and legal protection of the whole range of family structures.

An end to abuse and exploitation of and discrimination against youth.

An end to abuse and exploitation of and discrimination against older/old people.

Full implementation of the recommendations contained in the report of the Health and Human Services Task Force on Youth Suicide.

Culturally inclusive Lesbian, Gay, Bisexual and Transgendered Studies program; and information on abortion, AIDS/HIV, childcare and sexuality at all levels of education.

The ban of all discriminatory ROTC programs and recruiters from learning institutions.

An end to discrimination at all levels of education.

5. We demand the right to reproductive freedom and choice, to control our own bodies, and an end to sexist discrimination.

The right to control our bodies.

An end to sterilization abuse.

That access to safe and affordable abortion and contraception be available to all people on demand, without restriction and regardless of age.

That access to unbiased and complete information about the full range of reproductive options be available to all people, regardless of age.

6. We demand an end to racial and ethnic discrimination in all forms.

An end to institutionalized racism.

Equal economic opportunity and an end to poverty.

Repeal of all "English Only" laws and restore and enforce bilingual education.

Repeal all discriminatory immigration laws based on race and HIV status.

A commitment to ending racism, including internalized racism, sexism and all forms of religious and ethnic oppression in our communities and in this country.

An end to the genocide of all the indigenous peoples and their cultures.

Restoration of the self-determination of all indigenous people of the world.

An end to anti-Semitism.

An end to sexist oppression.

An end to discrimination against people with disabilities, deaf and hard of hearing people.

An end to discrimination based on sexual orientation in all programs of the Boy Scouts of America.

An end to economic injustice in this country and internationally.

An end to discrimination against prisoners with HIV/AIDS.

An end to discrimination against people with HIV/AIDS, and those perceived as having HIV/AIDS.

An end to consideration of gender dysphoria as a psychiatric disorder.

An end to hate crimes including police brutality, rape and bashing.

An end to censorship.

The 20th Anniversary of the LGBT March on Washington: How Far Have We Come?
1993 March On Washington: A 20-Year Retrospective 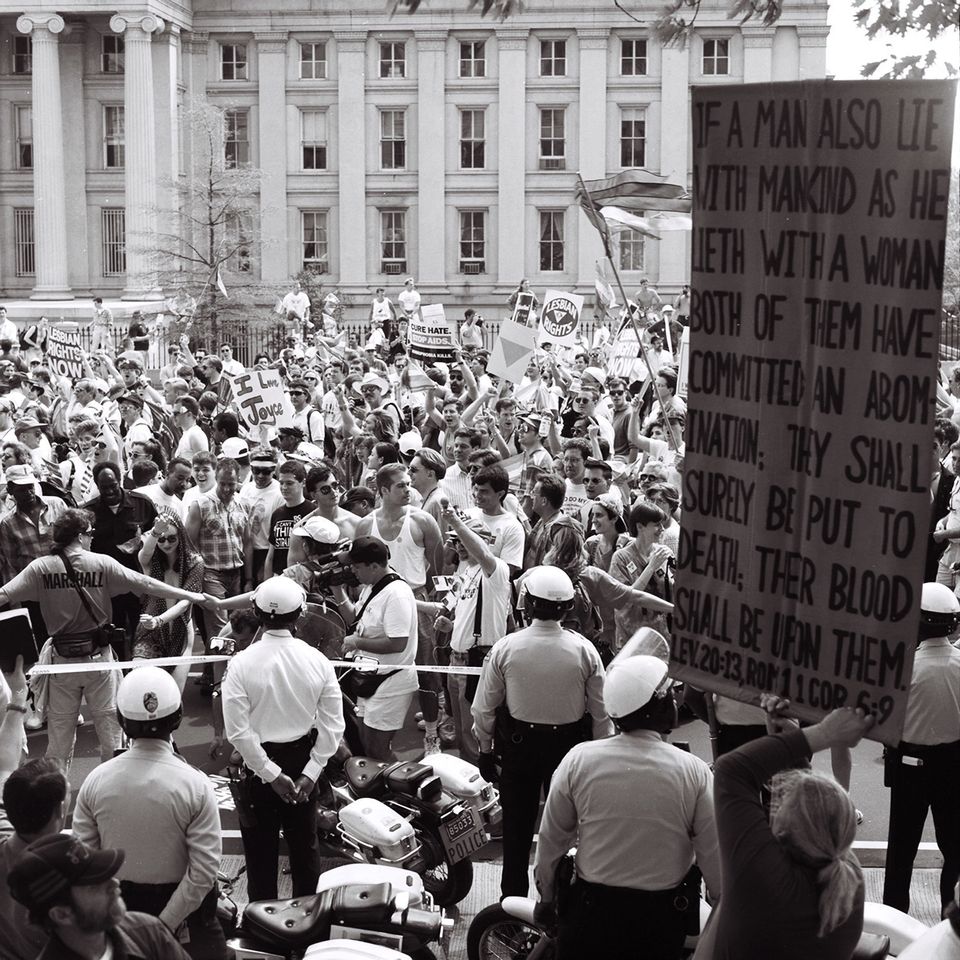