Fried chicken just might be the world's most versatile food. It makes just as much sense at the dinner table or in your car or at breakfast with waffles, as it does at 3 a.m. out of the fridge or during the seventh-inning stretch of an intramural, co-ed softball game. Though there are many styles, we opted to stick to Southern fried chicken because it's the truest, oldest, American-est form. Our research took us from famed chicken shacks in Nashville to an 1800s log cabin in Kansas City and down to Miami. Yes, even Miami. Disagreements? Omissions? Compliments for our impeccable taste? Leave 'em in the comments. But for now, tuck your napkin into your shirt, break out the biscuits and sweet tea, and savor our picks for the best fried chicken across the US of A. 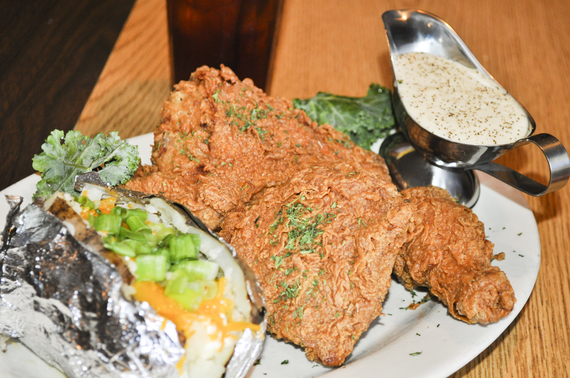 Courtesy of the Barbecue Inn

Houston, TX
Since 1946, the place that sounds like my favorite fever dream hotel ever has been serving up outstanding barbecue and fried foods to the citizens of Houston. My mom claims that -- when I was born -- they used to drive 45 minutes from our house over on Westleigh just to get the Chicken Fried Steak and that incredible, crispy Southern Fried Chicken, while I sat there sleeping and NOT EVEN ENJOYING THE INCREDIBLE FOODS PRESENTED TO ME. The best move is to order the alarmingly juicy All Dark. You've got to wait a half hour to get it, but when you do (alongside a stuffed baked potato with chopped beef) you'll understand why I'm still mad at my mom for refusing to give me some. 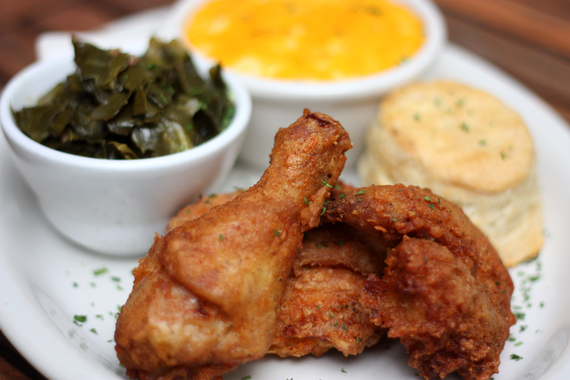 San Francisco, CA
For years, Brenda's French Soul Food had people standing in line for brunch way before it was trendy. And now that she's opened a more casual diner on Divis, people are going to have to get used to standing in line for dinner. Though you have no choice but to get Brenda's Fried Chicken -- just a little spicy and peppery and crispy, and it's perfect with the collards and that cauliflower gratin -- we're also pretty damn partial to the spicy chicken sandwich, which utilizes that same secret recipe crispy chicken, but throws in enough heat to balance against the coolness coming from the mayo, pickles, and lettuce. 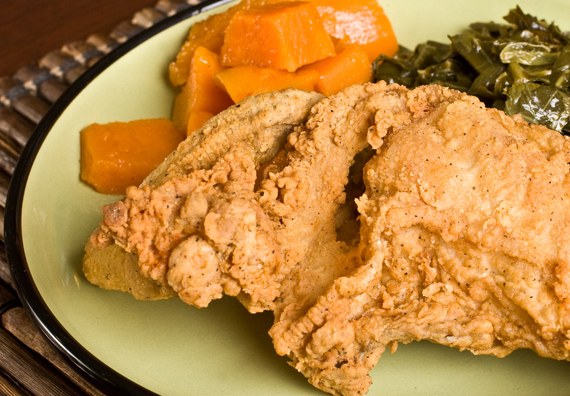 Atlanta, GA
Don't let the cute name fool you: this isn't a ladies-who-lunch spot, unless those ladies like grease spots on their cardigans. Busy Bee has been the best fried chicken spot in Atlanta since it opened in 1947, and, in a city that boasts soul food spots like lesser cities boast McDonald's, that means a lot. The chicken brines for 12 hours before it's tossed in lightly seasoned flour and plunged into a hot peanut oil bath. The only thing better than the chicken is the chicken smothered in pan gravy with two sides: get collards and broccoli and cheese casserole. 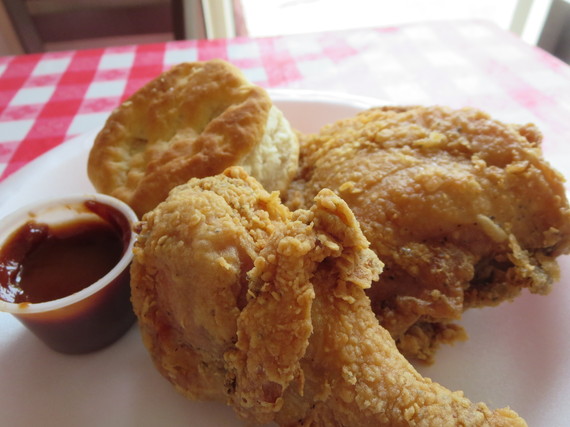 Evanston, IL
Just North of the Chicago city limits, this chicken shack (they are aptly named!) has been winning Chicagoland over for a quarter-century with its juicy bird thoroughly covered in a batter that achieves just the right levels of crispness and seasoning. While it doesn't need any help, dipping it in some of their delightfully spiced BBQ isn't a half-bad move. Foregoing the biscuits, however, is an extremely bad move. 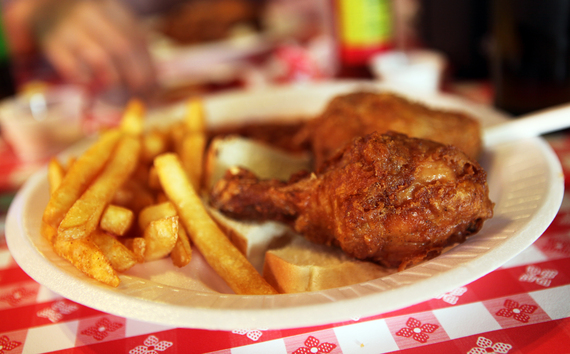 Memphis, TN
If I'd written this a week ago, I could have told you that Gus's chicken is famous enough to have 10 locations, 5 in its Tennessee home state and a few more dotted through the South. But I'm writing this RIGHT NOW, two days after the Memphis-based restaurant announced its paprika and cayenne-spiked fried chicken will be arriving in spots as far as Los Angeles and Chicago this year. So, Midwest & West Coast friends, do yourself a favor and get yourself to one of these gingham-draped tables, ease yourself into Deep South flavor with fried pickles spears, order a beer, and get to know Gus's spicy chicken. 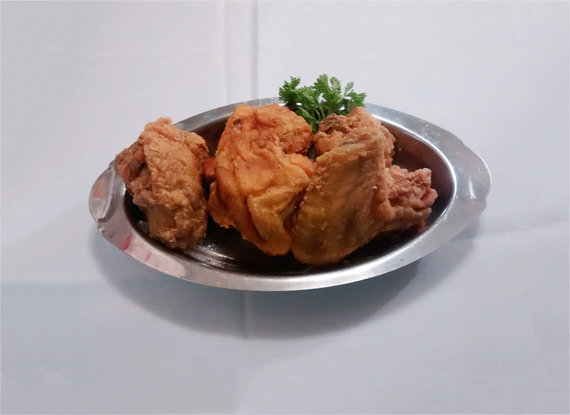 Indianapolis, IN
Do you know what a hollyhock is? I didn't. It's a tall Eurasian plant of the mallow family and has "large showy flowers." Well, apparently they grow in Indiana in the place where V.D. Vincent and his wife started serving special dinners at their cottage. It's only had two other owners since that time, run now by the Snyders, who've been a part of the restaurant for over fifty years. But enough history, let's get to the good stuff. The fried chicken is the first thing you'll see on those menus, as they've already figured out the appetizers, salad, and side dishes for you. They call it "famous, Hoosier, pan-fried chicken." You'll just call it "that thing I need to eat at least fifty more times in my life." 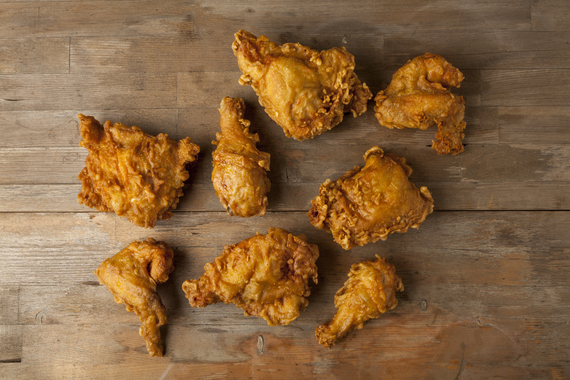 Culver City, CA
Vincent Williams, the master chef at Honey's Kettle, has "over 40 years of fried chicken cooking experience." He is purported to have fried "millions of pieces of chicken every year." And according to Malcolm Gladwell theories, that puts him so far over the 10,000 hour mark, he likely has no choice but to be the best fried chicken chef in the damn world. And judging by his chicken, that theory might hold up. All of it is hand-dipped in a special batter that is impervious to high temperatures and cooked up in peanut oil. Do yourself a favor and get the three-piece with a wing, leg, and thigh in the mix, plus those buttermilk biscuits. Then dip everything in honey and figure out what you should dedicate 10,000 hours to. It might just be eating this chicken. 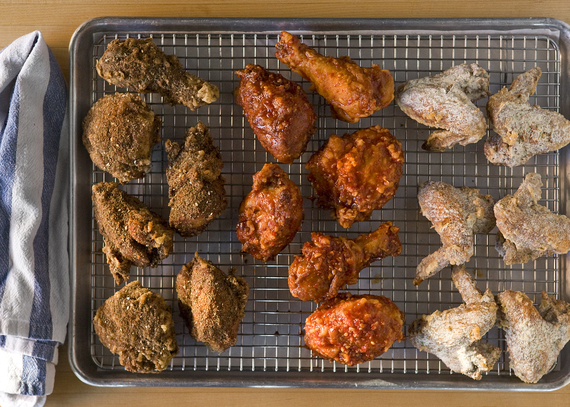 Philadelphia, PA
Though the hype surrounding Federal Doughnuts can -- at times -- reach some sort of a deafening fever pitch, what with the lines and the handing out of cards entitling you to fried chicken, chef Michael Solomonov's bastion of fried birds and dough continues to be worth temporarily losing your hearing over. Though the chili-garlic glaze is delicious, you're going to want to get the buttermilk ranch or za'atar dry rub on a half order (the "naked" version is very good, but the spices move it into Nic Cage 'High Praise' territory. Oh, AND: it comes with Japanese cucumber pickles and a honey donut, because that's really the only thing that can show waffles what's up. 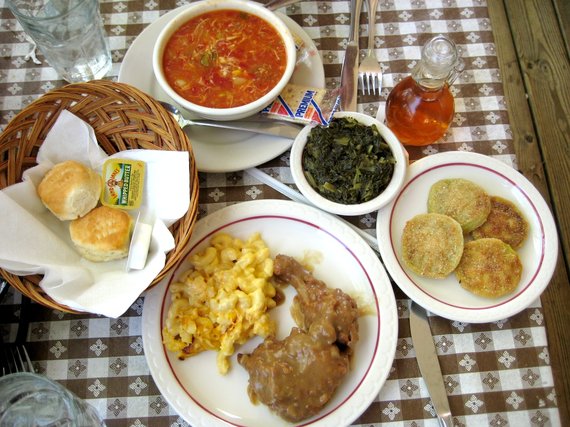 Chapel Hill, NC
The first time I went to Chapel Hill, it was for a wedding. But REALLY, it was to backseat-drive a car-ful of my extended family to Mama Dip's, tucked off the college town's main drag, for a two-hour lunch. Mildred Council, aka Mama Dip, so nicknamed because her "long arms allowed her to 'dip'" to the bottom of the rain barrel as a kid, started serving her lightly peppered shortening-fried chicken back in 1976. The move is half a fried chicken with greens (it changes daily, but you can trust it all, collards, turnips, or mustards), and black eyed peas -- both are cooked with pork, of course. And your next move is to avoid falling asleep in the wood-paneled restaurant with its Grandma-approved patterned curtains and front porch. It may look like a living room, but, just because you ate half a bird, you can't sleep there. 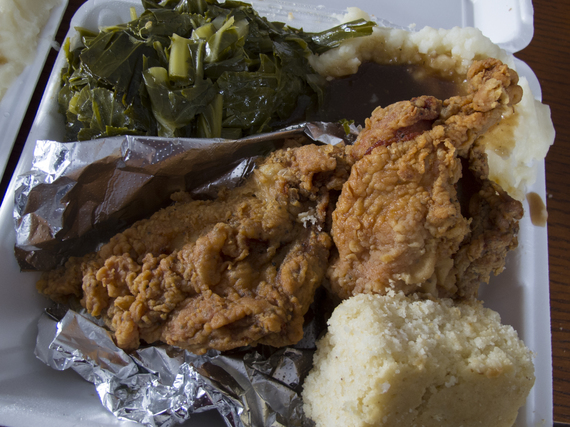 Detroit, MI
Detroit takes its soul very, very seriously, whether it's coming from the voices of Motown legends or the kitchens of its restaurants. Motor City Soul Food is basically Detroit on a plate, a pile of perfectly cooked soul favorites served up by hard-working folks who take immense pride in their work, even if they're forced to do that work from behind bulletproof glass. The chicken itself is a thing of such simple, crispy perfection that more than warrants the line that frequently wraps out the door. The sides do it equal justice, but don't fill up too much on candied yams and okra, or you'll miss out on one of the best damned banana puddings in the world.

Head to Thrillist.com for 11 more of the best spots in America for fried chicken!

Which Fast-Food Fried Chicken is the Most Delicious?

The Best Pizzeria in Every State in America