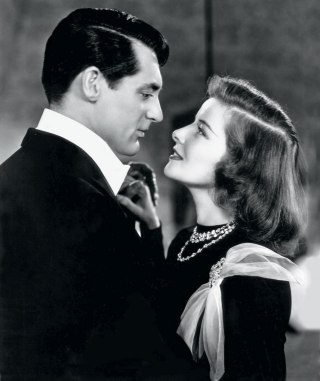 Whether judged by hankies used, sighs heaved, or pulses quickened, a truly fine romantic movie can burn its way into generations of hearts. From the star-crossed (Casablanca, Roman Holiday, Brokeback Mountain) to the triumphant (It Happened One Night, Say Anything . . . , Working Girl), Laura Jacobs falls for the 25 greatest love stories the movies ever told.

Any list of the most romantic movies-this one narrowed to movies in the English language-is going to draw sighs and harrumphs over beloved films left off. Quite a few unforgettable love stories are in movies that don't comfortably fit the category (Gone with the Wind, for instance), and the contemporary rom-com, while classifiably romantic, can seem as slight as the dandelion-a sunny flowering, a puffball dispersed on a breeze.

Movies that reach the romantic pantheon often have more at stake than a trip to the altar and don't always end up happily. Some invoke the archetypes of myth and fairy tale, diving into the deeper imaginative realms of high Romanticism, a movement enamored of mystery and nature untamed. Others are modeled on the literary "romance," a centuries-old genre of narrative fiction that combines adventure, idealism, and courtly love, as exemplified by King Arthur and his Round Table. These tales frequently take place on a journey where desire is set against duty, and where love alters destiny. The mortal dislocations of World War II-our "Good War"-are formidably represented in the realm of the romantic. Casablanca, for example, sees patriotism prevailing over the love of one person. The English Patient sees the reverse.

At the same time, high-flying ideals can become straitjackets or self-sabotage. Alfred Hitchcock's Notorious keys into a dark vein of lyricism, a place where self-sacrifice becomes voluptuous and ill. One thinks of William Blake's iconic line, which sounds the bass note of Romantic poetry, "O Rose thou art sick." That said, it is lyricism in all its textures-dark, light, aural, visual-that lifts these films to higher ground. Rodgers and Hart, in their song "Isn't It Romantic?," describe the feeling as "music in the night, a dream that can be heard ... moving shadows write the oldest magic word." Those moving shadows are movies.

THE AGE OF INNOCENCE (1993)
Beautiful and grave from the first strains of Gounod's Faust to the last ray of sun bouncing off a window, Martin Scorsese's film version of Edith Wharton's greatest novel gets richer with every viewing. This period drama was a departure for Scorsese, until then known primarily for street, gang, and Mafia movies. But were the fabled 400 of New York's Gilded Age any less controlling than the Cosa Nostra? Newland Archer, played by Daniel Day-Lewis, hasn't sold his soul to the devil but to a gilded ideal. His marriage to the angelic debutante May Welland (Winona Ryder) will fulfill every conventional wish. But in May's unconventional, unhappily married cousin, the Countess Olenska (Michelle Pfeiffer), he awakens to another ideal-the romance of deep affinity. This new love is blocked at every turn. But by whom or what? New York society closing ranks? Newland's own pride of place? Or a moral code that wills out? It's unbearably poignant, this life suspended between ideals.

THE AMERICANIZATION OF EMILY (1964)
This movie works hard not to be on this list. It questions all the romantic clichés: self-sacrifice, heroism on the battlefield, loyalty in the bedroom. Directed by Arthur Hiller from a script by Paddy Chayefsky, The Americanization of Emily stars Julie Andrews, in her most crystalline period, and James Garner, everyone's favorite good guy. Emily, having lost her father, brother, and husband to W.W. II, is sick of the cultural complicity that pushes men to be heroes. She believes a living coward is better than a wounded (or dead) warrior with a medal. Garner thinks similarly but opportunistically, without the moral dimension. Events twist and turn. Somehow he ends up as the "first man on Omaha Beach." The movie is beguilingly intelligent, funny, and, in the last reel, romantic. Andrews and Garner have both said it's their favorite of their films.

BEFORE SUNRISE / BEFORE SUNSET / BEFORE MIDNIGHT (1995, 2004, 2013)
Eros on location. The first movie in this trilogy is about two students who meet on a train, get off in Vienna, and pass the hours before a flight walking, talking, and falling in love. As Celine, Julie Delpy, of the honey-colored hair and full mouth, could be a pre-Raphaelite nymph, and Ethan Hawke's Jesse, with his glittering eyes and cool-dude goatee, is Mallarmé's Faun ("Did I love a dream?"). The following two movies, at nine-year intervals, catch up with the pair in Paris and then in Greece. Action consists of dialogue interwoven with desire: Vienna is reminiscent of late-night dorm discussions about life; Paris is more psychologically revealing and tinged with confusion; in Greece resentments flare and shadows lengthen. Directed by Richard Linklater, the trilogy dispenses with the usual climb toward happy endings, a story tied up with a bow, and instead finds romance in immediacy-the blue dart in the eternal flame.

BRIEF ENCOUNTER (1945)
Celia Johnson and Trevor Howard play "ordinary people" Laura Jesson and Dr. Alec Harvey, and Rachmaninoff's Piano Concerto No. 2-practically another character-plays the crashing, roiling wave of love that takes them both by surprise. "Noel Coward's Brief Encounter," as the movie is formally billed, was based on Coward's one-act play Still Life. It explores the deepening relationship between two married people of high morals who meet by chance in a train station. David Lean directed, pulling performances of understated passion from Johnson and Howard. Robert Krasker's black-and-white cinematography, justly admired for its shadows and fog, wears a darkness both sooty and soft. Renunciation can be beautiful, but it can also be bleak. The ending-Johnson's luminous eyes, Howard's Arthurian brow-is wrenching. 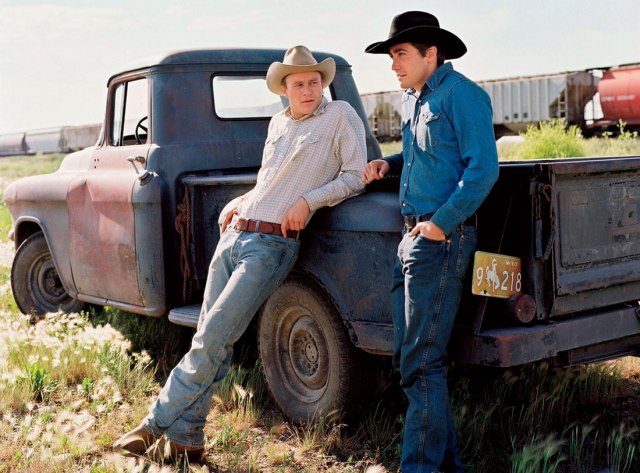 BROKEBACK MOUNTAIN (2005)
It's testament to our increasing enlightenment that this movie about the secret love affair between two cowboys ranks 12th among the highest-grossing romantic dramas of all time. It's a heartbreaker. The late Heath Ledger, in the role of Ennis Del Mar, underplays stoicism-which takes some doing. No one can know him because he hardly knows himself, except for one thing: he knows that he loves Jack Twist. Jake Gyllenhaal as Jack is less frightened by their love. He wears his heart, well, not on his sleeve but close at hand. (Ennis won't wear his heart anywhere.) And he has a vision of the life they could have together. But Ennis can't go there. So close, so far. Their two shirts in the closet-one over the other on a single hanger-embody everything, profoundly.

CARMEN JONES (1954)
"You go for me and I'm taboo. But if you're hard to get I go for you." That's the motto of Carmen Jones, a red rose inside a red flame. One of the most successful updates of an opera, this artful film, conceived and directed by Otto Preminger, is not a conventional musical but more a drama with music. The melodies are from Georges Bizet's Carmen of 1875, the words are by Oscar Hammerstein II, the time and place is North Carolina during W.W. II, and the cast is black, with a bewitching Dorothy Dandridge as Jones and Harry Belafonte as the love-obsessed Joe. This is romance as danger, as doom, a fate writ large in Carmen's delicious wardrobe (designed by Mary Ann Nyberg). That sinuous coral dress with the slashes over the heart says it all. Dandridge was nominated for the Academy Award for best actress, a first for an African-American woman.

CASABLANCA (1942)
Where to begin? There's the great cast: Humphrey Bogart, Ingrid Bergman, Paul Henreid, Claude Rains, Sydney Greenstreet, Peter Lorre. And the great moment: nervous, nervy locals silencing Nazi officers with a passionate rendition of "La Marseillaise." And the great song: Dooley Wilson singing Herman Hupfeld's "As Time Goes By." There are the immortal lines: "Here's looking at you, kid," and "Of all the gin joints in all the towns in all the world she walks into mine," and "We'll always have Paris." And the swift, punch-the-studio-time-clock transcendence of director Michael Curtiz. And the shocks of North African sun, of searchlights and moonlight in the night, courtesy of cinematographer Arthur Edeson. And there's the last scene, blanketed in gray-velvet fog, in which a skein of glances looms the most powerful triangle in cinematic history. Bogart-Bergman-Henreid. But more than that: love-war-duty.

THE ENGLISH PATIENT (1996)
World War II again. Zinc bars, cartography in Cairo, the glorious English, and love blossoming like a succulent in strange, dry places. The desert, the plane, the scarf, the cave, Ralph Fiennes in profile, and Kristin Scott Thomas stepping out of her bath-afternoon tea and the Wagnerian "Liebestod" of it all. Anthony Minghella's movie, based on Michael Ondaatje's stunningly voluptuous novel, works on the scale of grand opera. Little lives, historic upheaval, gargantuan passions. Tears, more tears, and we all die alone.

GHOST (1990)
Commerce between the living and the dead is the stuff of ghost stories, but when that commerce is love we move into the realm of Orpheus. This genre-the supernatural romantic fantasy-contains masterpieces: 1947's dashing and dansant The Ghost and Mrs. Muir and the 1956 screen adaptation of Rodgers and Hammerstein's Carousel. Jerry Zucker's Ghost is not a masterpiece, but it has an aching lyricism unique in contemporary film. Demi Moore, tremulous in a pixie cut, is at her loveliest. And the late Patrick Swayze is a concentrated presence, one of those actors the audience just feels for. He was perfectly cast in the kinetic coming-of-age romance Dirty Dancing, and he's perfectly cast here, as the ardent ghost with unfinished business.

HOLIDAY (1938)
While The Philadelphia Story (1940) enjoys most-favored status, its slightly older cousin, Holiday, which also stars Katharine Hepburn and Cary Grant, is a deeper, more poignant study of human nature. Derived from a play by Philip Barry (again like The Philadelphia Story ), Holiday is The Age of Innocence in reverse. Grant is freethinking Johnny Case, a self-made success who wrestles with whether or not he should marry into stiff, snooty society. Doris Nolan's Julia Seton is a strong temptation. But her older sister, Linda, more insecure and vulnerable-played with fire by Hepburn-is the soul match. She'd follow Johnny anywhere (as would we), but will he see that she's the one?

To see the rest of the greatest silver screen love stories of all time, visit VanityFair.com.

See more:
The 25 Best Breakup Stories on Film
The Most Stylish Directors in Hollywood
Jennifer Lawrence vs. Emma Watson: Who's the Most Stylish Actress Under 30?