A few key documents - The Declaration of Independence, the Constitution, the Bill of Rights - lay the foundation of the United States. On the surface each has a different purpose; the Declaration asserts independence, the Constitution sets up the federal government, the Bill of Rights (amendments added to the Constitution just three years after it was ratified) fills in key specifics of what the federal government can and can't do. But at their heart these founding documents are all about the same thing, something deeper than political independence and the structure of government. They all speak to the profound need humans have, literally in the instinctive pursuit of safety and survival, to feel like we are in control of our own lives.

Research on the psychology of risk perception has found that a sense of empowerment and control is fundamental to how safe or threatened we feel. And all sorts of evidence suggests that millions of Americans feel vulnerable, threatened, because they are losing control over their lives and futures. Glenn Beck (of all people) said it in Empathy for Black Lives Matter

...these movements (constitutional conservatives, Black Lives Matter) and others -- the Tea Party, the Bernie Sanders campaign, Occupy Wall Street -- share similar grievances: In their own ways, they say: "I am not being heard," "I don't feel like I belong anymore," "I have no control over my future."

Roger Cohen talked about it in The Age of Distrust

Many people in our liberal democracies feel they are being tossed hither and thither by forces beyond their control.


Beck and Cohen observe what Frans Timmermans, Dutch first vice president of the European Commission, said about England's Brexit declaration of independence from the European Union, that it reflects "...a broad sentiment in Western societies that we have lost control of our destinies.

All of this explains why the idea of a 28th amendment to the constitution, to limit the influence of money in politics and return at least a little more control of the federal government to the people, is as popular in the U.S. as our national government is unpopular. It would be hard to find anyone these days who believes that the government established by the Constitution 'to promote the general Welfare' is 'of, by, and for the people', (Lincoln's phrase from the Gettysburg Address) anymore. Across party lines and demographics, most people feel that our supposed democracy is now an oligarchy largely run by wealthy and powerful people and corporations controlling government to serve their own interests, not ours. Surveys find that trust in government is at historic lows. 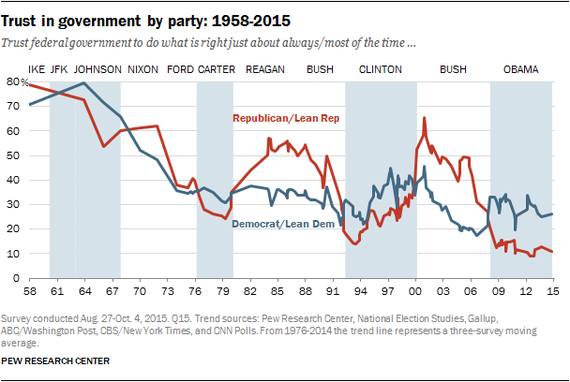 This lack of trust undermines our confidence in the institution - government - that exists to do things in the name of our safety and wellbeing that we are powerless to do as individuals; to keep our country and streets and food and water and drugs safe, to set commonly accepted rules to keep society running fairly for all and balance everyone's rights and interests, to share our pooled resources with those in need, since a world that works that way protects us should we ever be in need ourselves. We create and subscribe to government to give us a sense of control over these larger forces. And a democratic form of government gives us a say in how government runs. Democracy itself gives us a sense of control.

But only if we feel that our democratic government is answerable to us. Few people feel that way these days. The vast majority of Americans believe that our government really isn't ours anymore, that it belongs to those who provide the vast amounts of money necessary for politicians to run the kinds of campaigns our modern media age requires to get and keep power. Which is why the prospect of a 28th Amendment to take money out of politics and return at least a little more control of the federal government to us, is so strong.

Such an amendment would target the 2010
Citizen's United ruling by the Supreme Court
which held that freedom of speech extends to political spending by non-profit corporations, which the court has subsequently extended to include corporations, labor unions and other associations. But 7
9% of Americans want the Citizens United ruling overturned
. There are three ways that can happen.
Here are the rules for an amendment, as per Article V;

The Congress, whenever two thirds of both Houses shall deem it necessary, shall propose Amendments to this Constitution, or, on the Application of the Legislatures of two thirds of the several States, shall call a Convention for proposing Amendments, which, in either Case, shall be valid to all Intents and Purposes, as Part of this Constitution, when ratified by the Legislatures of three fourths of the several States, or by Conventions in three fourths thereof, as the one or the other Mode of Ratification may be proposed by the Congress;

More than 700 communities and 17 states have already voted to support an amendment to control the influence of money in politics. Two more states will vote on the idea this fall. If 33 states request it, Article V says Congress has to at least convene a special meeting to consider the idea. With a vast majority of Americans so eager to undo what the Citizens United ruling did, it's hard to imagine that Congress would blatantly ignore the will of the people and fail to send such an amendment to the states for ratification. Voters in at least 37 states would then have to say yes.

It would be naïve, however, to suggest that such an amendment is a fait accompli. It will depend on the wording, and various groups working for such amendment have competing ideas about what it should say. And of course corporations, unions, and the wealthy will pay vast amounts to fight an amendment that will weaken their influence over government. Campaign contributions will flow. Multi-million dollar ad campaigns will flood our airwaves and websites. The spending to fight an amendment will be vast (and mostly anonymous), because of the Citizen's United ruling itself.

Indeed that opposition has already begun, with threats from conservatives and conservative think tanks (which are principally funded by wealthy interests and corporations) that a 28th Amendment will 'overturn the First Amendment'. That's more than a little hypocritical from people and groups that claim to be Constitutional purists, since the Constitution explicitly establishes the public's right to change what the Constitution says. The Founding Fathers that conservatives so love to invoke were crystal clear that the power, the control, the final say about what the federal government can and can't do, belongs to We the People.

Hillary Clinton promises that, if elected, she'll propose a 28th Amendment within 30 days of taking office, music to the ears of supporters angry that corporations are considered people, allowing their immense wealth to take control of the government away from real actual people. Donald Trump has not spoken on an amendment directly, but has repeatedly decried the influence of money on politics. That resonates with Trump's supporters, who are viscerally upset that selfish special interests are running the government and controlling their lives. So support for a constitutional amendment to limit the influence of money on politics runs deep across the political spectrum.

And such an amendment would likely be popular among the growing number of people so fed up with a political system they think they can't control that they've stopped participating. The number of people identifying with either main party has dropped 8 percent in 8 years...roughly 93 million Americans eligible to vote, 4 out of ten, don't. A vote to limit the influence of money in politics and take back control of the federal government might get a lot of those voters to the polls.

America is deeply divided about many things. Indeed the battleground of our increasingly fierce and closed-minded tribal allegiances is itself a response to the sense of losing control, since the social human animal has evolved to depend on the tribe and its collective power for protection in times of vulnerability and danger. But in these divided times, the widely shared sense that we are increasingly powerless over our own lives and futures could bring us together, bring us out from inside the circled wagons of our separate tribes, align us in common battle against a common threat. This is, after all, the same threat that led to the American revolution and the founding of the United States in the first place; the deep threat we all feel when we don't feel like we have control.

I am an Instructor at Harvard University and a consultant and speaker on the psychology of risk perception.