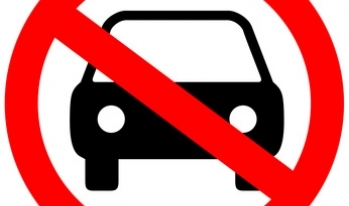 It is true that Detroit is huge, comprised of pockets, and a city of car-drivers. However, it has also become possible to live relatively comfortably without a car. I know because I do it. I don't have a car. I am a bicyclist, that being that can't decide whether to behave as a person or a car and so acts like both and obeys the rules of neither. But I digress.

Here is how it works. In my immediate downtown vicinity, there is a 7-11, numerous small convenience stores, a few coffee shops, multiple CVS', and tons of restaurants and bars. Within a ten or fifteen-minute bike ride, I reach Whole Foods and another full-service grocery store as well as all of Midtown. There is a widespread perception that the only way to go from Midtown to downtown is inside a vehicle. This in part stems from the simple fact that there is a freeway separating downtown and Midtown, It is an easy bike ride from one to the other, and when the new M-1 light rail opens in the fall of 2016 the trip will be even easier.

The Midwestern work ethic is no joke. Let me elaborate. This ethic is premised on the conviction that hard work and a humble attitude is the best way to lead a life. Employees work all hours to finish projects, and it is a given that everyone else is doing the same. Perhaps at this point it has become part of the Midwestern genome. I am no stranger to long hours and hard work, as a former Goldman Sachs employee and a good student. But perhaps one of Detroit's best-kept secrets is that you won't find harder workers anywhere else.

3. Feeling like you're part of something bigger than yourself

Once, I was showing some space to a chef de cuisine from Boston and I asked why he had chosen to open his first restaurant of his own in Detroit instead of Boston or New York. His response included a predictable answer and a not-so-predictable answer. The predictable answer: those East Coast markets are saturated, and he had already achieved everything he could on the Boston scene. The less predictable: he wanted to be in Detroit because it seemed like Detroit businesses took the mentality that they were all part of a team effort instead of pitted against each other to the death.

My time here in Detroit has proved that to be all too true. Businesspeople partner up on projects, host one another's events and support one another's causes. I have found that this phenomenon extends beyond businesses to the city's inhabitants themselves. Engaging in any more than a perfunctory conversation with a stranger inevitably yields the exchange of a shared commitment to strengthening the city.

Detroit is still admittedly a tough place. Those who choose to be here grasp life at its deepest level. And the energy Detroit has isn't something you can pinpoint. If you go around looking for it, you won't find it because you can't really see it. The people here are rooted in something spiritual that renders the challenges of the built environment less material.

In true millenial fashion, I generally eschew groups, categories and crowd mentalities. But for perhaps the first time I truly feel like I am a part of a larger project. This is surely part of what has made Detroit into a fashionable location for twentysomethings. Just as a new vision of Detroit has captured the American imagination, Detroiters hold onto an authentic certainty about this life that is totally intangible yet totally definite.