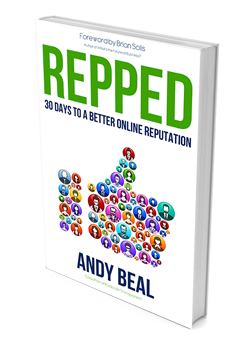 It's been over a month since Target announced it had experienced one of the biggest credit card hacks in U.S. history. The fact that over 40 million customer credit cards could be compromised is reason enough for Target to suffer a hit to its reputation, but when you factor in the reported delay in announcing the breach, things get worse.

All companies face the risk of an event that can hurt their reputation. In my new book, Repped: 30 Days to a Better Online Reputation, I provide actionable tactics for building, monitoring, and in this case, repairing your reputation. In this excerpt, I explain how you should respond when your reputation comes under attack.

When you let down your stakeholders, be it a botched product launch or a lapse in moral conduct, it's important to act quickly and with empathy. Put yourself in their shoes. It shouldn't be hard. You've likely experienced a situation where the product you bought was a dud or a contractor you hired took shortcuts in their work. When you make a mistake, it is all too easy to get defensive, hide behind mitigating circumstances, or worse, blame anyone else but yourself. Playing a game of rhetorical chess with your customers only prolongs the reputation attack and ends up costing you more in the long run.

Instead, when facing a reputation crisis remember these three simple words: sincerity, transparency, and consistency.

Most stakeholders who attack your reputation want just one thing: an apology. They want you to agree that they didn't deserve to be treated poorly by your customer service team. They want you to acknowledge that when they made a good faith purchase you should have taken care to make sure your product wasn't faulty. And they want you to admit that you shouldn't have posted a lewd photo of your private parts to the Internet. Most online reputation attacks happen because at some point you not only let a stakeholder down, but you didn't apologize for doing so.

If you're going to resolve this attack quickly, then you had better apologize quickly. Not one of those "we apologize for any inconvenience this may have caused" non-apologies, but a sincere, heartfelt apology. Whether you need to include a refund, gift card, or some other financial compensation will depend on how badly you've messed up, but at the very least you should apologize. Saying "I'm sorry" has repaired many damaged reputations.

When your cable goes out in the middle of the Super Bowl, the last thing you want to hear is, "we are aware of the situation and working to resolve it." What situation? What caused it? How hard are you working? And, will my signal be back in time to watch the fourth quarter -- or at least that cute Budweiser commercial?

When you make a mistake, your stakeholders will want to know how in the world you let this happen. This is not a time to plead your case or blame someone else. You need to be honest about what caused the situation, what measures you've put in place to ensure it doesn't happen again, and when the situation will be resolved.

If the first two words focus on appeasing and satisfying a specific detractor -- or group of detractors -- this last one is something all of your stakeholders will care about. When you make a mistake it leads to greater scrutiny by those that have decided to give you a second chance. You can bet that Tiger Woods, BP, and Target are all on a shorter leash, now that the world is aware of their respective Achilles' heel.

After you apologize, and explain the steps you are taking to prevent a further occurrence, you then have to live out your promises. You start by actually looking at what caused the issue in the first place and taking steps to prevent it from happening again.

When it comes to responding to a reputation crisis, there's only one hard and fast rule on how it should be delivered: directly from the top. While it may not always be practical for the top executive to reply, it should be your goal. If not, then the response should come from someone that appears to have enough authority so as not to appear disingenuous.

What will it cost you?

The information highway is littered with reputation road kill -- companies that delayed their response or tried to avoid taking responsibility for their actions. Instead of admitting their mistakes and taking the financial hit needed to correct their blunder, they instead try to sweep things under the rug. As a result their reputation never fully recovers.

Will Target's reputation ever fully recover? Certainly offering free credit monitoring to those affected, and a promise that new security steps are now in place, will help. However, if Target experiences another credit breach within the next three years, a temporary bruise to its reputation could turn into a permanent scar.