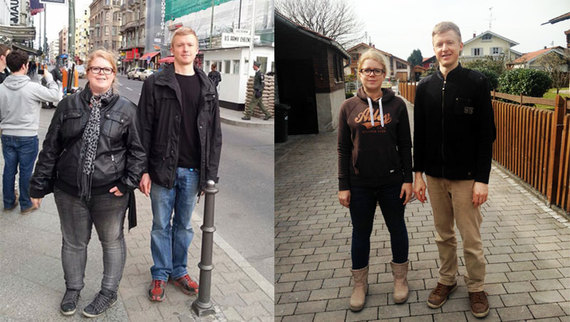 "If you want to lose weight, eat less, exercise more." They're telling us this for the past 50 years.

Nothing changed. Things got worse. Why? Because it's a lie.

Exercise burns calories, but it also makes you hungry. Your brain wants you to compensate the energy loss during exercise through food.

So, the key is to eat "right," not less. Right means real food.

If you think, "I just exercise to lose weight, and keep what I eat," consider this:

There is not a single study on the planet that shows that exercise alone causes significant weight loss. [1]

Exercise builds muscles, makes you stronger, helps you breath easier, transforms your body compositions from lots of fat and less muscles to less fat and lots of muscles. But your weight stays the same. Food makes the difference on the scale, not exercise.

Now, exercise isn't just burning calories. The benefits are much deeper and profound. If you feel stressed, overweight, want to become smarter, exercise will help you.

I'll give you four hidden benefits, that I found during my research. These will give you enough reasons to start feeling motivated to exercise for the rest of your life. And two things you can do today if you haven't exercised for years:

1. Exercise reduces levels of the stress hormone cortisol in your body
In our world today, "being stressed about work" has become the norm and cortisol is in our blood consistently. That will make you sick. Cortisol prepares your body for a fight or flight response. It raises blood pressure and heart rate. It's supposed to be in the body just for a short period.

The body's cortisol levels are naturally reduced during the movement of your body (That's why ducks flap their wings after a fight -- watch here.) During exercise, cortisol levels rise, but for the rest of the day they remain low. That means stress is not only reduced, but you become more resilient to future stress triggers. [1]

2. Exercise reduces insulin levels in your blood
Insulin is the energy storage hormone. Turning energy into fat is its job. The higher the insulin levels in your blood, the more of the energy you consume will be put into the fat cells. Too much insulin makes you fat. You can literally feel when you're in "energy storage mode." You feel tired, don't want to move, but just sit on the couch. The less insulin is in your blood the less energy is shunt into fat cells. [1]

3. Exercise improves your insulin sensitivity
If insulin is in your blood, it blocks the signal in your brain that you are full. Your brain thinks your starving even though you've just eaten a big meal. You keep overeating. When your brain becomes more sensitive to the insulin levels in your blood, it "sees" that you've eaten, and it will be less likely that you'll order a second meal. [1]

4. Exercise raises the amount of brain cells that are integrated into your neural network
New brain cells are created continuously. It's called "neurogenesis." The problem is the integration part. On average, just 30 percent of these new brain cells will be integrated into your neural network. The other 70 percent are lost. What a waste. There is, however, a simple way to increase that number to 80 percent. It's exercise. Fresh air combined with increased blood flow may be the last thing your brain needs to come up with your Big Idea. [2]

Exercise helps you burn fat, but it doesn't work on your weight as good as we were made to believe. But it's one of the best things you can do for your brain and body. You get stronger, smarter, fitter, breath easier, don't sweat all over when you walk up a few stairs.

Exercise doesn't mean you have to do something hard. If you can do just one thing during the week, just walk. That's it. It's the simplest but one of the best things you can do.

If you come home stressed and charged from work, before you enter your house, take a walk. You'll be much more friendly to the people you meet in your house. They'd rather like you to come home later with a smile on your face, than early with a sad or angry face.

After you've had a chance to read the article, I'd love to hear from you.

What's your biggest challenge when it comes to getting enough exercise? Or, how did you build exercise into your daily schedule?

NOTE - The book on [2] is currently only available in German, but it's by far the best introduction if you want to become more creative and productive while remaining peaceful and stress-free. If enough people write her on her Facebook page maybe she might consider publishing an English version for you.

More:
healthy livinglose weighthow to lose weightless-stress-more-livingFitness and Exercise
Newsletter Sign Up
The essential guide to taking care of your mind and body
Subscribe to HuffPost’s wellness email
Successfully Subscribed!
Wellness delivered to your inbox