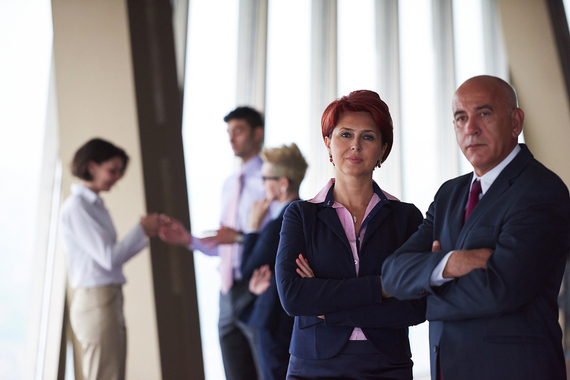 Is your company doing these 4 things to advance women? Part 4 of 4.

In the past several months I have attended over 15 women's leadership events and witnessed over 5,000 leaders (women and a number of amazing men) talking collectively about how to advance women. I have had the pleasure of observing C-Level male leaders who are true champions and are demonstrating the will to drive change in their organizations. Leaders such as Ian, Tom, Dave, Chuck and a host of others in industries as diverse as corporate security, supply chain, telecom and pharmaceuticals.

These first three things organizations need to do to advance women come from the Male Champions of Change: 15 Male CEO's in Australia who have outlined exactly what men (i.e. still 85% of senior leaders) need to do to drive long-term systemic change for women in their organizations. They highlight the need to Listen, Learn and Lead. Having the Will to Change is the fourth and final thing your company needs to do and it is the most important element of a company's success in advancing women.

Have the Will
Willingness to change means we have to examine our company's results, acknowledge they are not acceptable and choose to do something about it. Below is what the average company looks like for women and men by level:

Your numbers may be better or worse. The question is, "Is it acceptable to you as a leader of an organization?" Many people say it's because of unconscious bias that organizations (specifically men) aren't intentional in their actions. During a recent conversation with Susan Vinnicombe, Professor of Organisational Behaviour at Cranfield International Centre for Women Leaders in Great Britain, she suggested that I listen to Margaret Hefferman's TED Talk as she notes it's not unconscious bias but willful blindness.

The willingness to accept these numbers and choose to accept status quo is not unconscious bias but willful blindness. Margaret Hefferman

How can leaders look at their numbers and not wonder what is going on in their company from a cultural standpoint that is conspiring to hold women back? Chances are it's a host of factors. This is when you need to Listen, Learn, Lead... and Have the Will to drive change!

So which companies Have the Will?
AccorHotels, Barclays, Koc Holding, McKinsey & Company, PwC, Schneider Electric, Tupperware Brands, Twitter, Unilever and Vodafone are ten global companies who recently came out and said they are not satisfied with how few women they employ. In a report released by the U.N. Women's HeForShe campaign last week, these companies openly shared internal data on how few women they have in leadership roles. These companies collectively employ more than 1 million people in 190 countries.

Part of my personal leadership vision is to move the needle on gender equality.
Dennis Nally, Chair of PwC Int'l Ltd

Openly, publicly committing to change. This is what having the Will to Change looks like. Organizations and leaders are NEVER satisfied with status quo. Leaders need to look at their numbers and their leadership team to take action.

Here's a simple test for your company
If women are truly a business priority of your organization, how many full-time resources and millions of dollars do you have committed to this work?

Chances are your women's strategy is owned by your women's resource group. A committed group of volunteers with a budget well south of $50,000. If women were truly a priority, companies would be sourced, staffed and budgeted appropriately. I cannot recall the last successful brand launch or M&A that was conducted by volunteers and a few thousand dollars. Organizations must be willing to staff and fund their women's leadership initiative like any other corporate priority.

4 things your company needs to do to advance women
To summarize this series, in Part 1, I encouraged men to genuinely talk to and Listen to their female colleagues. You will find that men and women are having significantly different experiences in the workplace. In Part 2, I encouraged leaders to Learn and write detailed business cases for change tied revenue, profit and company reputation. In Part 3, we explored Corporate Champions of Change who are Leading by example.

Men owe it to themselves, their companies, employees, shareholders . . . and their daughters to do a better job in advocating for women.

The rest is up to you!

*Full disclosure, I am a lifelong Green Bay Packers fan and in this week leading up to Super Bowl I had to quote the greatest of all time. A visionary leader, a champion of diversity . . . and the father of a daughter.

Jeffery Tobias Halter is the country's leading male expert on advancing women and engaging men. He is the President of YWomen, a strategic consulting company focused on engaging men in women's leadership issues. Jeffery is a TEDx speaker, Huffington Post Blogger and the author of two books, WHY WOMEN, The Leadership Imperative to Advancing Women and Engaging Men and Selling to Men, Selling to Women. Keep in touch @YWomen.