Like thick wool sweaters and heavy rubber boots, slow cookers belong in the back of the closet when summer rolls around. Right?

I'm here to tell you that kicking those appliances to the curb when the sun starts shining is a fool's move. Because on warm, sunny days, when the last thing you want to do is to coop up in the kitchen, the slow cooker is your secret ally, percolating a delicious dinner while you're soaking up the last few hours of sunlight on the patio.

But wait, you say. I don't want to eat slow-simmered braises when the weather gets warm. Actually, you only think you don't. With just a few tricks, these wintry braises (from some of our favorite new slow-cooker cookbooks) can transform into spectacular summer sandwiches. Here's how:

PILE ON A CRUNCHY SLAW
What problem can't coleslaw solve? It's invincible, especially in the summer, when you crave all things cold and crunchy. And when piled high atop pulled pork on a split Kaiser roll, a simple cole slaw brightens up the classic sandwich and makes it finger-licking perfection.

PULL OUT THE CRUSTY BREAD
Bread that's soft on the inside and nice and crusty on the outside elevates just about anything that's been slow-cooked. This is especially true for vegetables, which can all too often become mushy and lifeless. When peak summer produce like eggplant, bell peppers, zucchini, summer squash, and tomatoes are simmered until soft, stuffed into a split, crusty baguette and topped with a slice of Swiss cheese, just to gild the lily, you've got one killer vegetarian sandwich. 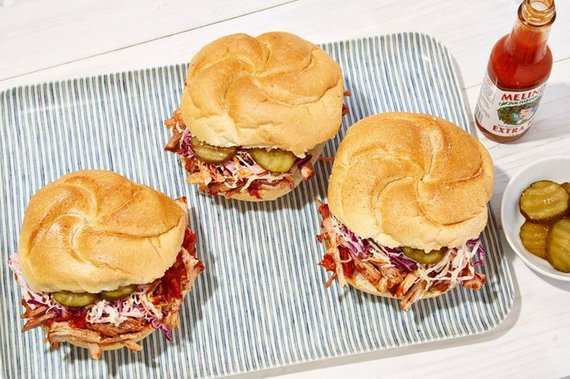 SHRED IT AND SAUCE IT
Chicken stew: Not summery. Pulled chicken pita with a cool yogurt sauce? Bring it. The brilliance of slow-cooker summer cooking is that the recipe for both of these things is the same. Just let those extra juicy chicken thighs cool down slightly, until you're able to pull it off the bone. Shred it, and add spoonfuls of the cooking liquid to moisten. Stuff the shredded chicken into halved and split pita, tuck the carrots in alongside, then dollop plenty of tzatsiki--a cucumber yogurt sauce--on top, to cool things down and add tang.

ADD LOTS OF FRESH HERBS
Ropa vieja, a traditional Cuban beef stew that's cooked until the meat falls apart, is delicious rib-sticking--and severally lacking freshness. So how do you make it fit for summer eating? Pile it on a halved Italian hoagie roll spread with a bright-green, herby chimichurri sauce that's packed with fresh cilantro, parsley, and oregano.

More from Epicurious:
20 Must-Try Ways to Pair Items You Already Have In Your Pantry

This Recipe Has 908 Comments, and They're All Hilarious

The 57 Best Cooking Tips of All Time