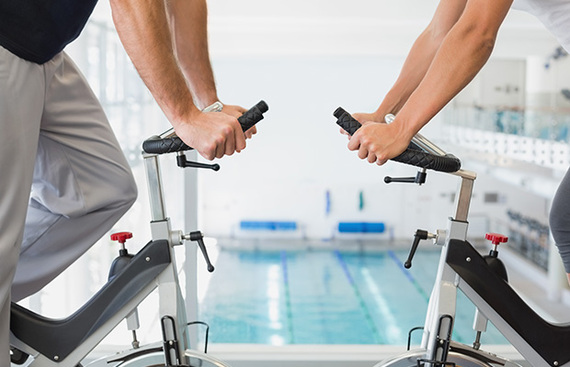 Sure, running is a great workout to have as a part of your cardio repertoire -- it's not only a great way to get fitter, but it improves your mental wellbeing, too. (Read one woman's story about how running saved her life.) But it's not right for everyone, and more importantly, running is not the only way to stay in shape. In fact, there are many different types of dynamic cardio workouts that give you a stellar calorie burn, while sculpting muscle at the same time. Try these five workouts on for size -- but, instead of going through the motions, maximize your efforts with the expert-approved tips below. Can't make the modifications just yet? No problem. Work your way up incrementally, and bookmark this page for when you're ready to take your sessions to the next level.

The Burn: 714 calories per hour
How to Maximize It: After setting up properly, boost your burn by "focus[ing] on pulling your pedals up behind you," says Holly Rillinger, Master Instructor at Flywheel Sports. "Most times [when spinning] we are only pushing down with our quads, but when you're clipped in [to a spin bike's pedals], you have the advantage of using the full stroke." Focusing on the upwards motion helps target your glutes and hamstrings, so you'll increase burn more calories while sculpting your entire lower body, too. Rillinger also suggests adding more resistance during quick sprint sessions: "When you have momentum, you can handle more resistance than at the beginning of the sprint. It'll raise your heart rate and blast more fat," she says. And use your core to resist that urge to collapse onto the handlebars when you're exhausted -- your abs will thank you later.

The Burn: 554 calories per hour
How to Maximize It: HIIT, which involves drills like sprints, lunges, and speed skaters with brief periods of rest in between, "keeps your engine revved after [exercising], so you burn more calories than a workout at a steady, moderate pace, " says Yusuf Jeffers, a trainer at HIIT studio Tone House in New York City. But make sure you're giving your body its deserved rest periods, says Jeffers. You can't push yourself hard enough if you're not recovering fully between rounds. "Plus, insufficient recovery results in overuse injuries and diminished results." What's the right amount of rest? Catch your breath for at least half as long as you just worked. A recent study in the Journal of Strength and Conditioning Research found that a 2:1 work to rest ratio is ideal. (Remember, even though they're meant to be quick workouts, don't go too fast. Here's how to time 'em right.)

The Workout: The VersaClimber

The Burn: 1,000-plus calories per hour
How to Maximize It: You'll never go back to that dusty StairMaster once you get the hang of this interval-based workout. The key to getting the most from the VersaClimber? Simply keeping up. Because you're working your lower and upper body together into one climbing motion, expect to get fatigued fast. But even though you'll feel tired, you'll be building strength, endurance and coordination, according to Jason Walsh, founder of Rise Nation, an LA-based VersaClimber studio. "The act of climbing on a VersaClimber not only makes you strong, but also reinforces better moving patterns while working against gravity," Walsh says. "The motions on the VersaClimber build a stronger core and back which gives you better posture and makes you a more deadly athlete." Win, win.

The Burn: 578 calories per hour
How to Maximize It: Hop on an indoor rowing machine to work your entire body in ways you didn't think were possible. Every stroke you take incorporates about 84 percent of your muscles, says Helaine Knapp, founder and CEO of CITYROW. And unlike running, it's super-low-impact on your joints. But just as with running, proper form is essential. "The stroke can [feel] counterintuitive if you're new to rowing," Knapp says. "Most of the power should come from your legs as you push back, hinging forward at your hips. Your arms move last, pulling in, and are also first to release as you return to starting position." Sit up straight with your abs pulled in tight, and focus on your power -- not speed. Pick up your pace and you'll likely take short strokes that don't work the full range of muscle and can put excess stress on your lower back, according to a study in the Journal of Sports Sciences. "The minute you prioritize speed over proper form, your stroke breaks down and you're cheating yourself out of the full benefits of the workout," Knapp says.

The Burn: 550 calories per hour
How to Maximize It: See people cranking out jump squats, burpees, or box jumps at the gym? Those are all moves in what's referred to as plyometrics, a method of metabolic conditioning reliant on explosive movements (think: hops, bounds and fast feet). The goal is to contract the maximum number of muscle fibers in the minimum amount of time. Plyometrics "'trick' your nervous into executing movements with maximum force very quickly," says Jeffers. Channel the need for max force and quick feet by working out when you're "fresh and ready-to-go, never tired or completing after another workout," he warns. "Doing so trains your nervous center to react slower and weaker, which defeats the cumulative benefits of the workout." Try doing these explosive moves on rubber flooring or grass; anything that's too soft or too hard will diminish your power on each jump or push-off.

All calorie counts are based on estimates from CalorieCount.com.

More from Life by DailyBurn:
How This Man Lost 100 Pounds, One Small Change at a Time
Is It Better to Do Cardio or Strength Training First?
Frozen Yogurt vs. Ice Cream: Which Is Healthier?

More:
healthy livingFitness and Exercisefitnessworkoutcardio
Newsletter Sign Up
The essential guide to taking care of your mind and body
Subscribe to HuffPost’s wellness email
Successfully Subscribed!
Wellness delivered to your inbox