By K. Aleisha Fetters for Life by Daily Burn 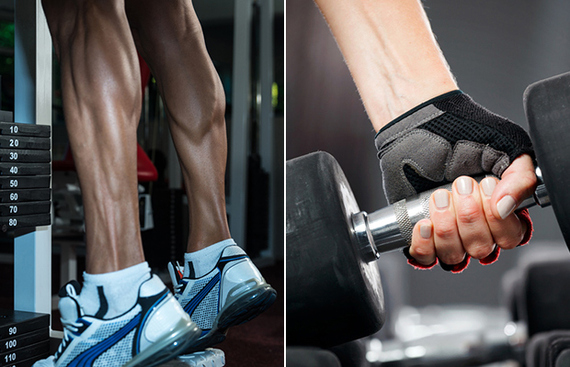 There are some muscle groups guys love to train -- namely, the ones that look great under a t-shirt. And hey, your chest, bicep, abdominal and shoulder muscles all make huge contributions to your overall strength. But so do a lot of other muscles that you might be neglecting entirely.

Unfortunately, ignoring certain areas during strength training can cause muscle imbalances that could wreck performance and predispose men to injury. Plus, they could actually make those above-mentioned "vanity" muscles look less chiseled than they otherwise would, says strength coach Tony Gentilcore, C.S.C.S., co-founder of Cressey Sports Performance.

"When exercising, men need to train their entire body, not just the muscles they can see," Gentilcore says. "The entire body works as a unit. Everything is connected." To maximize strength, and build a body that's sculpted all over (not just from the waist up), these are the areas you should give a little more love at the gym.

Daily Burn: So You Want to Do a Pistol Squat...Here's How

Women love to sculpt glorious derrières. Men, not so much, says strength coach Dan Trink, C.S.C.S., owner of Trink Fitness. Trink says guys' strength training routines tend to be upper-body heavy. The result: Huge chests and flat butts. "Many guys skip leg day all together so they don't even attempt to strengthen their glutes or other muscles of the lower body," Trink says. What's more, even if they do schedule a leg day, guys often fail to work on those muscles enough to counteract the glute-weakening effects of sitting on their keisters all day, he notes.

Here's the thing: Your gluteal muscles are the largest muscle group in your body -- so ignoring them comes at a high price. "At best, it will lead to loss of strength and power development [when doing] things such as squatting and sprinting," Trink says. "At worst, it can lead to muscular imbalances, which result in smaller muscles having to perform bigger tasks. This can lead to overuse problems and injuries." Many men with weak glutes complain of lower back pain and suffer from hip stiffness, too, adds Gentilcore. "If you aren't training [your] glutes, you will have to rely on other parts of your body to stay upright."

How to: Using a bench, come to a bridge position with your upper back on the bench, arms laying horizontally along the length of the bench, and both feet planted on the floor, knees at a 90-degree angle. Lift your left leg, keeping it bent at a 90-degree angle, until your shin is parallel to your right thigh. Keeping your right leg bent but relaxed, and your left leg lifted, lower your hips to hover just above the floor. Then, push back up, driving through the right heel while clenching the right glute. Complete two to four sets of six to 10 reps on each leg.

If you feel the burn in your hamstrings, rather than your butt, while doing this move, your hammies are likely compensating for your too-weak glutes, Gentilcore says. Any hamstring activation will lessen as your glutes become stronger. Since this move works with a light load (just your bodyweight), you can complete it five or six times a week without overtraining, he says.

Adductor-focused exercises, which tone the inner thighs, tend to have a "girlie" reputation. Hence, a lot of guys ignore them entirely. However, your body needs strong adductors, which help your thighs move laterally, to perform just about any leg movement both in and out of the gym.

Daily Burn: 5 Exercise Machines That Aren't Worth Your Time

After all, when you are squatting, climbing stairs, running, or plopping down on the couch, your thighs don't just move forward and backward. They also move side-to-side, as well as rotationally. What's more, the adductors help stabilize and protect the knees. "When you have weak adductors, strength can go out the window on classic lower-body exercises such as the squat," Trink says.

While squats can strengthen your adductors, to really zero in on your inner thighs Trink recommends performing lateral lunges and exercise band movements in which the thighs move together against resistance.

How to: Stand with your feet together, back straight, with a dumbbell in each hand. Bending your right leg and keeping your knee joint aligned above your ankle, step to the right to come into a side lunge. Squeezing the glutes and inner thigh, return to standing. Repeat on the opposite side. Perform three to four sets of five-high weight reps on each leg once a week and two to three sets of 10 to 12 medium-weight reps on each leg once a week.

Sitting, typing, and texting can take a toll on your upper back. Plus, many men worsen imbalances by overdoing it with the push-ups, bench presses and other front-focused exercises, Trink says.

Daily Burn: 5 No-Equipment Back Exercises You Need in Your Life

A weak back -- especially if you have a strong chest -- can leave you bent over like a caveman. Plus, a hunched posture can actually make your pecs look smaller by making them fall in on each other, Gentilcore says. "Strengthening the back makes men stand more upright so that you can better see the chest."

How to: Sit at a seated cable station. With your feet on the platform and your knees slightly bent, grasp a V-bar with your palms facing each other. Then, keeping your back flat, pull the bar toward your torso until your hands are just in front of your chest. Slowly extend arms, and repeat. To properly engage your back muscles, focus on pulling your shoulder blades into each other. Perform three to four sets of five high-weight reps once a week, and two to three sets of 10 to 12 medium-weight reps once a week.

Underdeveloped leg muscles -- aka chicken legs -- plague many guys. "Men are super visual. We like to work what we can see and often neglect our entire backside, but especially the calves," says strength coach and personal trainer Mike Donavanik, C.S.C.S., C.P.T. After all, your calves aren't that big, so they can't be all that important, right?

Wrong. "Calves are totally a functional muscle. The weaker your calves, the less volume of work your legs will be able to handle on a daily basis," Donavanik says. "The muscles of your calves also help keep your ankle strong, so with weak calves you are more prone to ankle instability. Lastly, if you play any type of sport that requires explosive sprinting or quick pivoting and change of direction, your calves are crucial, meaning weak calves will hinder your performance." 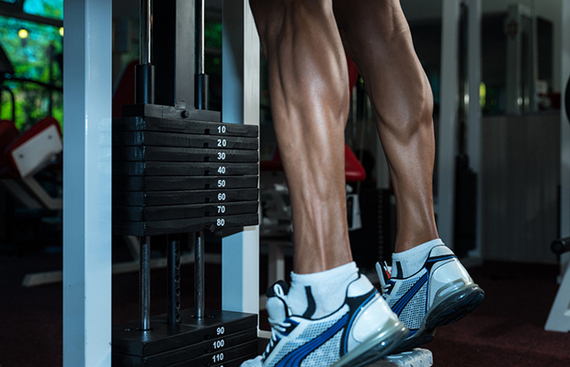 How to: Stand on the edge of a low platform or step, your weight centered on the balls of your feet and your heels hanging over the platform's edge. Holding a dumbbell in each hand, raise your heels as high as possible, pause, and then slowly lower yourself to return to the starting position. Make sure to keep your legs just slightly bent throughout the movement. Aim for four sets of 15 to 20 reps with heavy loads. Perform each exercise two to three times per week for optimum leg strength.

There's a reason grip strength is a key indicator of a guy's overall power. "Having stronger forearms will obviously help your grip, but having a stronger grip will allow you to accomplish more in your workouts, especially when completing pulling exercises, Donavanik says.

For instance, pull-ups, lat pull-downs, rows and deadlifts all require a great amount of grip strength. "Many people burn out in their forearms before the exercise's primary muscles even start to get taxed."

How to: Sitting on the edge of a flat bench, hold a light-to-medium weight dumbbell in each hand so that your forearms are resting against your thighs and your palms are facing up. Your wrists should hang over the edge of your thighs. Then, slowly curl your wrists up and toward your forearms as far as possible. Pause, then return to start. Perform three sets of 20 to 30 reps of each exercise once per week.

Want More Ways to Step Up Your Game?

35 Sneaky Nicknames for Sugar You Need to Know

So You Want to Do a Pistol Squat...Here's How