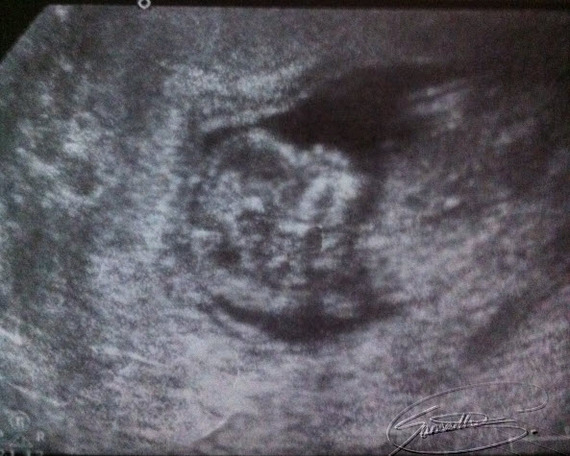 Earlier this month, I found a photo of my son's sonogram. It was taken during the summer of 2012 and this time was one of the most exciting times for me. My husband and I were anxious to have our little boy and talked for hours about the activities we'd do with him and how much we'd want him to learn. My pregnancy was a fairly pleasant one. And although I had a great experience, every month was like a roller coaster at Six Flags. The only way to describe them is to put it in writing so here goes.

I was surprised to learn that I was pregnant with my son. He was a very happy surprise, so surprising I took two pregnancy tests and still wasn't convinced I was with child. I guess the shocking part was coming to the understanding it wouldn't be just my husband (who was my fiancé at the time) and I anymore. Then there was the doubt I would be ready to be a mother in nine months. Shock wore off the moment I heard his heartbeat at the midwife's office. That moment can only be described as love overload.

Phase 2: Sick of Being Sick

For the first three months, I became best friends with my bathroom, saltine crackers and ginger ale. Random hunger and upset stomachs was the name of the game and I had no say in the matter. I drank so much ginger ale it took me over a year after the pregnancy for me to tolerate the taste of it. I had the worse nausea; it was so annoying. And I smelled every single thing both good and terrible. Oh, and I haven't even mentioned falling asleep everywhere. I would rush home just to go to sleep. My bedtime was at 8:00 p.m., I was officially the boring friend.

Phase 3: Glowing and Eating Everything

I was hot stuff once the first trimester was out of there. I had my energy back, my hair was super thick and shiny, I had this gorgeous pregnancy glow, my skin was the clearest it had been in years, and I had an excuse to eat everything in sight. The baby bump I had been waiting forever to see was finally here and everyone wanted to touch it. The latter wasn't always my favorite especially when people would ask "do you mind" with their hands already on my belly. But it didn't bother me much because I was on cloud nine and I was probably eating something delicious. This phase was one of my favorites because this was also when I felt him kick for the first time and when I really felt him actively making his presence known. This is usually the time that most expectant moms are in Babies R' Us buying everything except for the bolted store shelves because to us, our babies can never have too much.

Phase 4: Obsessed Over Everything

Completing the baby room and buying as many bottles of baby shampoo is what we can't stop doing. All I could talk about when speaking to people was stuff about the baby. The event of a lifetime (giving birth) was right around the corner and I needed to make sure I knew what I was doing. I attended the baby classes, read the books, asked the questions to the moms who had been there and done that before but I still felt like I had a lot more to do. Then it happens, that moment when you have to come to terms with the fact that your baby is going to come out of you somehow. I stayed up at night just picturing what I believed would resemble one of those gory episodes of Grey's Anatomy or ER. The idea frightened me. I saw the videos on YouTube and they were scarier than any horror film I've ever watched. But it was the next phase that helped me overcome this.

I liken this phase to phase 2 except instead of being sick I was exhausted and done. At some point I didn't feel there was any more room for him to grow in there. Sitting for long periods of time was getting hard and standing was even harder. Then there was the kicking I once anticipated that was now keeping me up at night. I was at my wits end. And ironically when that first contraction hit me like a wave, I couldn't be any happier. The pain I feared in phase 4 was gone. I actually welcomed it because I knew that the baby would be here and soon enough I'd be able to sleep on my stomach! I was so over it, I didn't mind during labor that I was commando or that my midwife had to repeatedly check how far along I was dilated. Was that TMI? Well speaking of that, my concern for TMI went out the window too while laboring. And believe me when I say I was so shy before that. The finale was near, and I was ready, I had the imaginary superwoman S on my chest to prove it.

When it was all over and I finally held my son in my arms for the first time, I felt like the most powerful person in the room. That moment made all those phases worth it. This little person who heard my heartbeat from inside was now laying in my arms. Feeling like a champion comes easily at the end of it all and the memory will stick with you for a lifetime, I know it will for me.

Samantha Greaves is a freelance writer who has been writing since 2008, contributing entertainment and lifestyle topics to online magazines. She loves writing articles about life and especially about being a parent. Her experience as a new mom is the source for many of her blog posts. Samantha resides in Brooklyn, NY with her husband and son, and blogs about life and writing via her blog SamanthaGWrites.com.