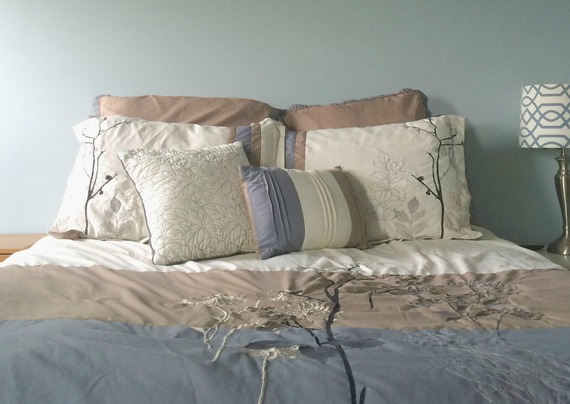 We all have that friend: every time you go to her house, everything is in its place, the counters are shining, and the toilet doesn't have that pink ring around the bowl.

I used to think that these kinds of people were like Monica from Friends: genetically wired to love cleaning. I assumed that they had intensive cleaning schedules with at least an hour of work each night and then multiple hours of deep cleaning on the weekends. I wrote off maintaining a clean home as something that I just didn't have the time or energy for. Or at least, I had the time, but I would rather spend it living my life, thank you.

Now, I still don't have the time or will to clean my home for hours and hours each week. But as I've become more engaged with simple living, I've found that there are a few tricks to keeping your house looking good a solid 80% of the time. These are the secrets of people whose homes always seem clean.

1. They know the difference between tidy and clean.

A house could be clean in that the surfaces and floors are scrubbed, the furniture and carpets are vacuumed, and the bathrooms are shining. But if there are clothes all over the unmade bed and toys all over the floor and piles of books and papers everywhere, that house will not give the appearance of clean because it isn't tidy. I can function and feel at ease when my home is tidy but a little dirty; I can't relax when it's clean but cluttered.

2. They make tidiness a daily habit.

People whose homes always appear clean don't wait until it looks like a bomb went off and then snap and spend hours and hours cleaning up the wreckage. They have routines (note: not schedules) to keep each room looking tidy. This might mean rearranging throw pillows and folding blankets when they're done in the family room each night, having kids put toys back in the toy box, hanging up clothes at the end of each day, and folding the laundry right when it comes out of the dryer.

Much like making tidiness a habit, they make cleaning as they go a habit. They do the dishes right after dinner, they wipe down the bathroom counters after getting ready for the day, and they sweep the crumbs off the floor after having a snack. By keeping major surfaces relatively clean throughout the week, they don't have to spend time doing these tasks during more intensive cleaning sessions, leaving more time and energy for things like mopping floors and dusting baseboards (you know, occasionally).

It's hard for a home to look cluttered when the owners don't have tons of stuff. Instead of spending tons of time organizing the stuff they do have, just to have it all go back to chaos a week later, these people keep their stuff simplified in the first place so they don't have to organize it.

5. They have a junk drawer.

Because no one is perfect and not everything can have a place. It's just the truth. So for the few things that are cluttering up the counter when last-minute friends stop by, those few items can be swiftly swept into the drawer and forgotten about for the moment.

These habits are easy, simple, and less time consuming than you would think--in fact, they save time in the long run. If you want to have a home that always appears clean, start with just one of these secrets and integrate it into your daily or weekly routine, building up from there.

I have a pretty strong inkling that having a baby and then eventually, I hope, multiple kids, will throw me for a loop in this area. There will be adjustments periods, and that 80% number may become something more like 50% or 60% at times. But I do believe that these habits are totally possible with kids running around, especially if you get them in on helping. I don't think there's a better time to keep stuff simplified than when it comes to acquiring baby stuff and kids' toys, and truly, keeping possessions limited is more than half the battle.

And for the moments when the things you do own are everywhere and the kitchen is covered in crumbs and the toilets haven't been scrubbed in weeks, remember: you're doing just fine.