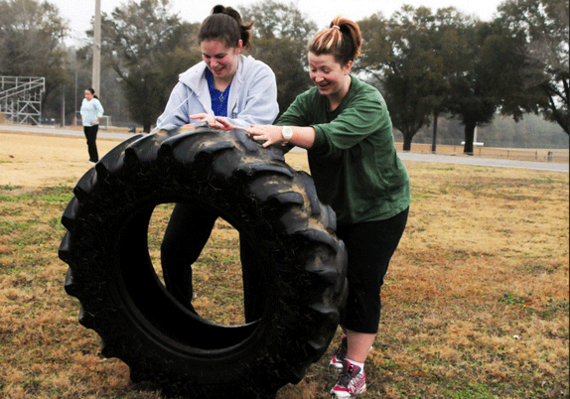 "I am not what happened to me, I am what I choose to become." -- Carl Jung

As a personal trainer, I regularly meet people who have very specific fitness goals and are determined to reach them.

Sometimes they want to lose weight before a wedding. Sometimes they've made a resolution to start the New Year off right. Other times they're motivated by an upcoming tropical vacation (got to look good on the beach).

Regardless of their reason for wanting to get in shape, all of these people have one thing in common: They are ready to "do whatever it takes."

At least they think they are.

Nobody hires a personal trainer and says, "I'm only willing to give this 50 percent of my best effort." In theory, everyone wants to do their best and to see amazing results.

There's just one problem... What people believe in theory is often quite different from how they behave in reality.

Recently I met Lori, a new mom who was looking to get back to her pre-pregnancy fitness and body shape. She was excited to exercise, eat healthy, and... yes, do whatever it takes.

Lori hadn't exercised during her pregnancy, which meant that it had been almost a full year since she had been in any sort of fitness routine. Nevertheless, she was determined to jump back in since her doctor had recently given her the green light to begin training.

She was adamant that she wanted to hit the gym five days per week and said that she could afford a full hour for each of those workouts.

Do you think this would be a good way for Lori to get the results she was seeking?

Most people give up on their fitness goals soon after getting started because they didn't understand how committed they actually were to the process, and therefore chose a path that was far too challenging.

Losing weight and getting in shape perfectly illustrates a psychological model called The 5 Stages of Change. This model states that we all go through five specific stages when trying to form new behaviors or adopt new habits.

Understanding these stages, and determining which stage you are actually in, can go a long way to helping you choose a fitness plan that will lead you to success.

As you read through the five stages, consider which stage you are in and what actions you might take to move you onto the next stage.

1. Pre-Contemplation
People in this stage are basically in denial. They either don't know that they should change OR have decided that they don't want to.

Fortunately, you are not in this stage (at least not likely) because someone in Pre-Contemplation wouldn't be compelled to read this article! They aren't interested in change.

The most helpful exercise for someone in pre-contemplation would be to look at evidence showing why change might actually be beneficial. For example, they could watch a weight-loss show on TV and notice that the participants do seem happier after losing weight. Gathering enough evidence could propel people from Pre-Contemplation into Contemplation.

2. Contemplation
After recognizing that there is value in making change, people move into Contemplation. Here they begin to do cost-benefit analysis. They ask themselves, "What will I have to do and is the effort worth it?"

There is a tendency for people in this stage to jump into a fitness program even though they aren't ready for it. They might have identified that in theory they are ready to make the sacrifices needed to change, but they haven't determined how to properly approach those changes.

An example could be someone who has never really exercised before. Their doctor tells them that they need to lose weight and they agree. Immediately they sign up for a gym membership because that's what fit people do!

Instead of skipping ahead to the Action stage, those in Contemplation first need to take time in the Preparation stage.

3. Preparation
This stage is all about planning, and it happens to be the stage most often overlooked. People in this stage have decided that they want to adopt a healthier lifestyle and now need to figure out what that will look like.

For some people, an appropriate plan could mean simply going for a 15-minute walk each day. If they have never exercised before then this will be a challenging undertaking. Other people might choose to hire a personal trainer so that they don't have to do all the planning alone.

The Preparation stage is also often skipped when it comes to adopting a healthier diet. Yes, it sounds great to cut out all junk and eat completely clean, but this isn't realistic preparation for most people. Maybe a more appropriate plan would include eating two extra servings of vegetables each day? Or perhaps a plan to cut out soda would be a good place to begin?

During the Preparation stage it is crucial to be realistic. What can you see yourself sticking with for the next week, month, or year? If you can't imagine a new habit lasting a full year then prepare to start with something smaller and more manageable.

People in this stage have already identified the benefits of changing, plus they have committed to the process and have prepared a plan that fits with their current reality. Now they just need to do it.

This is the stage when it makes sense to buy a gym membership, sign up for a fitness class, join a sports league, or go shopping for new ingredients to incorporate into healthy meals.

The start of any new plan is always the most exciting. That's why it can be easy to jump and with both feet, abandon the plan, and quickly burn out. Take action, but stick to the plan.

5. Maintenance
The Maintenance stage includes tweaks and improvements to the original plan as well as taking on new challenges. For example, that 15-minute daily walk might turn into 30 minutes, and eventually even some jogging. These incremental changes are good and healthy once the initial actions have proven to take hold and have become habit.

Another aspect of the Maintenance stage is finding ways to stay motivated. A once-exciting fitness routine or eating plan can become stale. When this happens there is risk of digressing back to old patterns -- don't let this happen!

People in the Maintenance stage can benefit from connecting with each other. This could be accomplished by finding a gym buddy, or by signing up for a 5k race with some friends. Having personal accountability is a great way to keep moving forward and maintaining good habits.

The 5 Stages of Change are inescapable but are also very useful. Think back to Lori. Instead of taking on five grueling workouts per week, she agreed to start small. She did two workouts per week and went for an extra-long walk (while pushing the baby stroller!) on the days she wasn't in the gym.

Taking the time to move through each stage of change drastically increased her chances of sticking with her new plan. And it has worked!

I've watched her succeed with a very doable fitness plan. She quickly passed through Preparation and Action, and now she is taking on more challenges in the Maintenance stage. She is living proof that these five stages are real and that we all live through them, whether it is in fitness or some other area of life.

So, if you're looking to make lasting changes in your life, ask yourself, "Which stage am I in? What am I doing to move onto the next stage?"

This mindful and proactive approach will help you reach your goals.