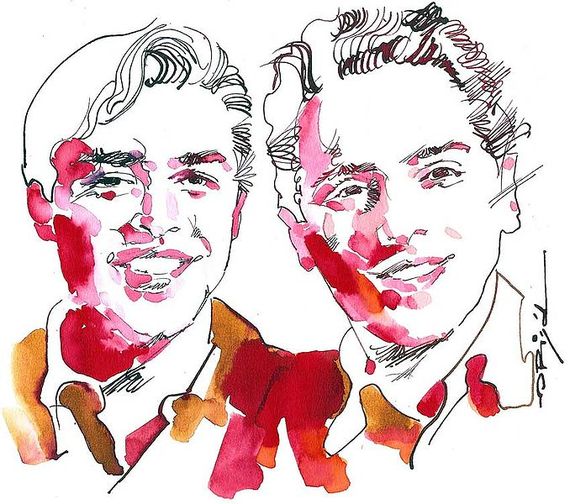 Almost everyday there are stories covering Google's new projects or the evolution of it's many products. With so many initiatives it can be hard to step back and look at where the web behemoth is really heading. What does success in five years look like? Back in 2009, Eric Schmidt denied the existence of any formal five year plan, but with Larry back in the drivers seat it's not hard to imagine him sitting cross legged at Burning Man, chatting to Serge about how everything fits together. Based on some of the recent acquisitions, new developments and the evolution of their current products, the plan probably goes something like this:

1: Become our primary interface to the world

As we scurry about each day, connecting, creating and discovering, we use a bunch of tools to make our lives better. These tools have changed over the years, but they are very much a part of who we are. Google's strategy here is about becoming the ultimate life tool, the primary lense between you and everything else. There is a beauty and power in connecting all the things we use to shape our world, and naturally its also a little scary.

Within five years Google will provide you the option to live almost your entire day through it's interface, a strategy that will tighten their hold on search while also opening up new revenue models. A device gently wakes you in the optimal sleep pattern, you run on a Google Glass enabled treadmill, a self driving car will take you to work where your spend you day using Google's business applications via Google devices, ordering food, video chatting with your family and when you get home streaming a TV show. A layer of artificial intelligence similar to Scarlett Johansson's character in Her will let this tool learn a huge amount about you and the context of your life in the world, enabling it to be extremely effective at making your life easier. If Google gets into body scrubs and scratch resistant frying pans they may just be able to close the loop. I'm sure the Google Glass apps will cover the sex part.

2: Improve the quality and reach of the internet

Google's growth and the speed of its innovation is closely tied to fast and widely available internet connections. Expert them to explore all possible avenues to drive this goal. Google Fibre will continue to rollout to specific areas around the world, putting pressure on other ISPs to deliver faster, cheaper services, a strategy which they could also implement within the wireless industry, sticking to small implementations to drive customer demand but staying away from government watchdogs.

More high speed wifi networks like the one in Chelsea, NYC will be available in neighborhoods and on public transportation. Built by Google or deliver in partnerships like the Google Offers/Boingo network.

Projects like Loon will help bring connectivity to more than 50% of the world that are still without and provide support in the event of natural disasters.

The house is a fresh focus for Google, but it's the type of contained environment that their tech heads could really get stuck into. Google is tackling the home with a multi-prong strategy - connectivity, content and automation. Their recent acquisition of NEST puts them in a prime position to build on the digital thermostats and smoke alarms into the emerging connected home and security market, coveted by telcos and cable companies but something that could benefit from a central developer platform like Android.

Content is really the heart of Google's strategy for the home, they have a competitive TV product in specific Google Fibre areas and Chromecast is growing into a solid content platform, they are starting to talk big boy content rights such as access to NFL 'Sunday Ticket' and a bunch of other deals to expand it's Google Play service. Paid Youtube channels will continue to bring new content owners and creators to the Youtube platform and with that, more ad dollars.

Automation is probably the wrong word for the other element of the strategy, it's more about artificial intelligence. DeepMind has given them a jumpstart in this area and I'm ready for my house to start making the big calls like what to take out of the freezer for dinner tonight. I'm not sure how many robots I want kicking around my place but I'm sure Boston Dynamics will have models for playing catch and doing yard work.

4: Control more of the purchase cycle

Sure Google has nailed the discovery phase of commerce but that is only a slice of the tasty purchase pie. They just filed for an ad service patent that would allow them to connect online ads to retail stores by sending a free taxi to pick you up and take you to a store to collect the product you clicked on in a web ad. That is one example, but there are many other aspects of product purchase where they plan to get involved.

Google will expand product comparison tools evident in moves such as the recent press around it's Flight Search evolution. They will also implement additionally buy functions within their content platforms such as Youtube, Glass and Chromecast. Payments have been a little quiet at Google lately but expect a huge push from Google Wallet as Apple makes a move to own mobile payments with fingerprint ID. It won't be an easy fight as they have multiple competitors and still facing the somewhat lackluster uptake of NFC at a device level.

Within the next few years we could easily see a play for the production phase of the pie as well, perhaps we'll see them pick up a 3D printing company in the near future. With it's new robotics and AI assets don't think they are going to let Amazon's drones rule the skies, Google will be well equipped to deliver your products with its self driving cars and street smart robots. Some of you may look forward to the day when we share the sidewalk with C-3PO looking bots carrying boxes.


While they have dabbled in health through smallish investments in genome mapping projects Google has a lot more smarts to throw behind health innovation. Last year Larry announced they were serious last year when they launched Calico with the task of combating aging and fighting disease. Google made several other healthcare investments last year including One Medical Group and Doctor on Demand, a physician's network and a video chat platform connecting doctors and patients. These investments are opportunities for Google to apply the benefits of it's platforms and devices into the consultation phase of medicine, while partnerships with providers like optical health insurer VSP mean that Google Glass frames and lenses will be subsidized signaling a new wave of wearable tech giving us the chance to share even more data.

The overall level of VC investment in healthcare spiked 39% last year so expect competition from other innovators to continually push for disruptive innovation in one of America's most challenging industries. Naturally some of the innovation cycles can move slowly in the world of medicine, but expect some quick wins when Google really starts crunching the big data behind DNA, unlocking some body hacks that will keep you alive a bit longer, plenty of time to click on a bunch more ads.

While this strategy overview may be far from concrete, it serves as a point of discussion. We may soon be approaching the hypothetical era of technological singularity, a point where artificial intelligence is smarter than us and we are able to leverage it to rapidly advance the pace of innovation. Google expects revolutionary developments over the next few years and credit to them for putting themselves in a position where they can really make big things happen, a position that they know has the potential to walk a morally precarious line, and taking steps to steps to implement a new ethics committee to ensure guide rails.

Let me know anything I have missed. Alternative priorities, strategies or potential 10X ideas that we'll see in the next five years.