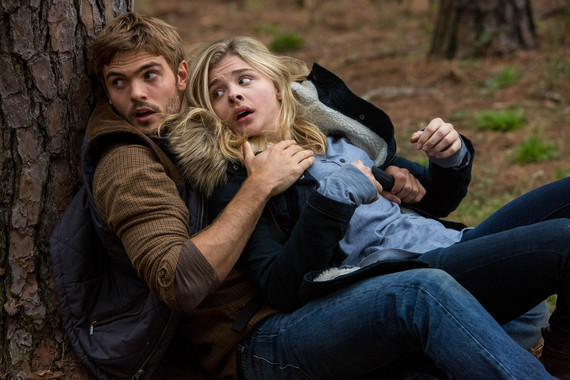 Lately, if you feel unworthy because God has given you just too good a life . . . just too much joy . . . and your hair shirt is at the cleaners, you can do your penance watching J Blakeson's The 5th Wave.

Yes, here's yet another dystopian teen mini-epic based on yet another acclaimed YA title, this one by Rick Yancey. USA Today called the tome "a modern sci-fi masterpiece." Add Amazon Best Book of the Year to The 5th Wave's plaudits. Yet the screenplay it inspired, the one fashioned by Susannah (Erin Brockovich) Grant, Akiva I, Robot) Goldsman, and Jeff (The Amazing Spider-Man 2) Pinkner, might best be described as The Ennui Games or first-class teen drivel.

The tales begins with Cassie Sullivan (Chloë Grace Moretz), a lone, adolescent lass crossing a deserted roadway with a rifle in hand. She heads into a ransacked grocery store searching for any source of protein. While stuffing some goodies into her knapsack, she hears a voice from behind a door yelling for help. Cassie opens the door and looks at the bleeding gent who is pointing a gun at her, just as she is at him. What should she do? Is he human or an Other who has taken human form?

You see beings from another planet are attempting to take over the Earth. In the first wave, the creatures did away with electricity. Then there was rampant disease spread by birds, followed by earthquakes and tsunamis. What's next? How about the destruction of all that's left of mankind.

Flashback time: The very shy Cassie is at a party where she meets her high-school crush Ben Parrish (Nick Robinson) who's talking into a pink telephone. Don't get worried. It's his sister's. The two make small talk, and that's it. (Ben, by the way, is named after the ice-cream brand, Ben and Jerry's.) 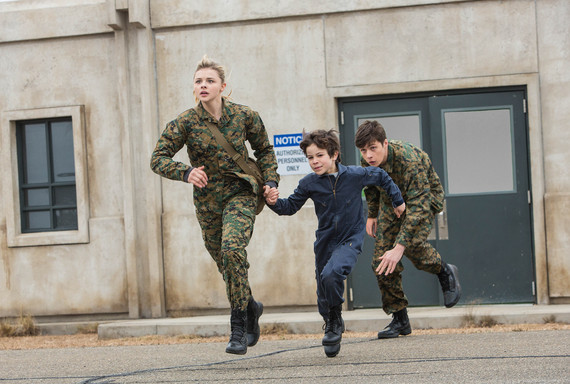 The cast of The 5th Wave run for their lives after attending an advance screening of the flick.

The next day, all the kids are at soccer practice when the world starts to end. Planes fall out of the sky, cars crash, and iPhones stop working.

Soon society as we know it no longer exists. The majority of folks you Facebook are dead, and the "army" is recruiting kids forcibly to vanquish the Others. However, Cassie is on her own until she gets shot and rescued by the stunning Evan Walker (Alex Roe). Is he a human or an alien? Our heroine doesn't care once she sees him bathing nude in a river, but you will stop caring a long time before that about any aspect of The 5th Wave.

This highly derivative, poorly directed caper, that's devoid of a sliver of suspense, parades a gaggle of cardboard characterizations through their paces to never-less- than-annoying effect. Ms. Moretz, who was apparently quite fine in Let Me In and Kick-Ass, relies on her looks here which are not enough to carry the film. Liev Shreiber as the head of the Army walks about intoning his lines as if he were in an Idahoan dinner-club production of Richard III. As for Maria Bello as a nefarious doctor, let's hope her paycheck makes up for her loss of dignity. 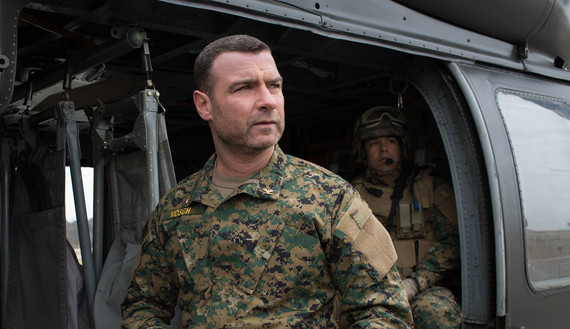 Liev Shreiber is in search of his first Razzie Award for Worst Supporting Actor.

The only folks who really show some promise and spark here are the charismatic Roe and Maika Monroe as a good bad-girl, but even they can hardly overcome an insipid screenplay, bland cinematography, and pedestrian special effects. Then there's the film's motto: "Love is not a trick. It's real." A pleasant sentiment but one that doesn't rise to the level of say Joseph L. Mankiewicz, let alone Full House.

As for wit, the only amusing aspect about The 5th Wave is that it ends as if there will be a sequel. That would really finish off mankind.