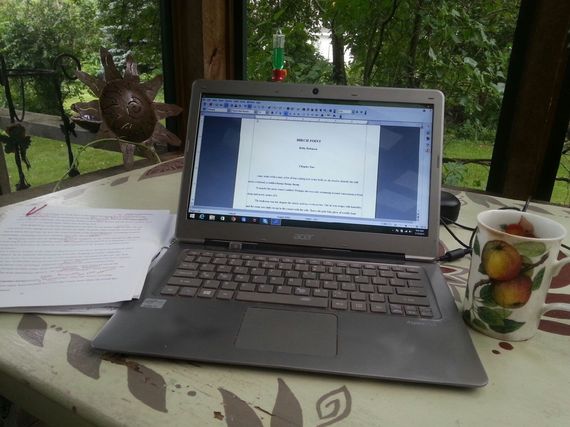 When a friend asked recently what I was working on, I was excited to share my publishing news: I had just delivered my new novel to my editor at Penguin, and now I'm deep into a fascinating ghostwriting project.

"So how much money do you get for a book?" she asked.

I hesitated. We Yankees are as apt to discuss money as other people are likely to talk about toe fungus. But she's a good friend, so I told her.

She gasped. "That's all? How can they pay you so little for a whole book?"

Granted, this friend of mine has an actual job as the CEO of a mid-sized company, but I went home with shoulders bowed in humiliation. What she said was entirely true: being a full-time writer means that you don't live like most people with full-time jobs.

That conversation led me to consider some of the other big surprises of my writing life:

1. Unless Your Book Is a Bestseller, You Will Drive a Used Car. Forever.

When I sold my first book to a major publisher in 2009, I thought I'd finally made it. No more writing technical articles and medical books! I was a real writer now! I could live off my advances and royalties!

No such luck. Royalties, for most of us, are a myth: publishers are good at determining how many copies a book will sell and pay advances accordingly. Those advances are paid out in thirds, and if it takes two years for your book to make it into stores, you will wait two years and six months for that final third of your advance. After that, royalties only arrive every six months, and the amounts are so unpredictable that you can't count on them as a living wage. So you'd better either have a roommate with a steady paycheck or have another income until you produce enough books to keep you going.

2. Book Tours Are a Thing of the Past.

Yes, some authors are sent on book tours--if their books are turned into movies, like J.K. Rowling, or TV shows, like George Martin--or if, per chance, they write bestselling murder mysteries in a series. Even that is increasingly unlikely: I once walked into a shopping mall to see Robert Parker sitting at a table in the mall by himself. And a friend of mine who has been nominated for multiple awards, including the National Book Award, counts herself lucky if she has half a dozen people show up for an event. Your publisher is unlikely to support any of your travel expenses because there's little payback. That doesn't mean you shouldn't get out there and meet readers--only that the tour will be on your own dime.

3. Writers Aren't All Drunks or Psychopaths

I used to worry that I was too happy to be a writer. How could I hope to succeed, if I had a loving husband and children I adored, when all of the writers I'd studied in school had gone off the rails either with drink or misery?

In fact, most of the writers I know are nearly normal. We get up and put on our sweat pants, walk the dog, work on a chapter, throw in the laundry, work on another chapter, pick the kids up from school, make dinner, and maybe do some editing at night. Treating your writing as a day job is the best way to produce steady, publishable work.

4. Most Books Aren't Made Into Movies

Sure, we all dream about that movie option. But the reality is that pitifully few novels are made into movies--about thirty each year. And the ones that do get made into feature films aren't always the best books. I'm sure you have your own list, but let's just start with Twilight and Fifty Shades of Grey and leave it at that.

5. Your New Book Won't Necessarily Be Better than Your Last

Oh, if only this were true, that each book we write sparkles brighter than our previous attempts. But, as with giving birth to children, a difficult labor does not guarantee that our new offspring will be smarter or more likable than the ones we brought into the world before. All you can do is write the book that's in you at the time you're writing, and pull out all the stops to give it your best effort. And whether your publisher wants another book after that one won't be based on how good the books are, but on your numbers. Publishing is all about the bottom line.

For me, this was the biggest surprise of all: while it's true that writers necessarily spend a lot of time alone at their desks, it's also true that many are extremely social, gathering for workshops, conferences, craft classes, and retreats--or just hanging around on social media. Reach out to a fellow writer, and chances are good that you'll find a friend. We treasure each other because nobody else quite understands--or values--this peculiar passion to assemble words that will bring the deepest possible pleasure and most profound truths to our readers.