For GQ by K. Aleisha Fetters. 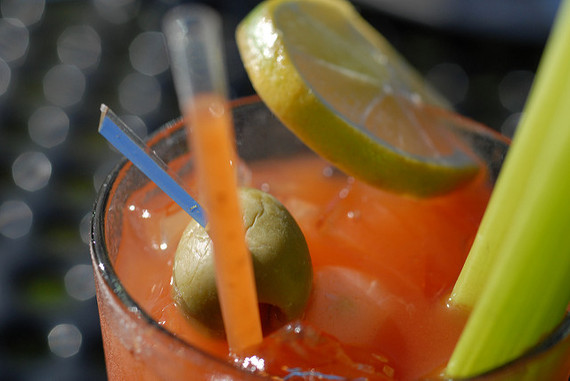 You had a great time last night... and now you're paying for it. (Though if you had read our 5 Surprising Ways to Cure a Hangover you wouldn't be in this mess to begin with, not that we told you so...) While collegiate wisdom says to reach for greasy, fatty foods to "soak up" the alcohol, that large cheese pizza you ordered at 3 A.M. (and then snacked on later for "breakfast") is mixing up a potent gastrointestinal cocktail that's just too strong for your weak tummy to handle. And even if you have a stomach of steel, most fat-laden foods don't provide your body with the nutrients alcohol has depleted, says nutritionist Monica Reinagel, M.S., L.D.N., C.N.S.

That doesn't mean you can't eat your way to a brighter morning after. You just need to pick foods that'll replace the nutrients your body has lost and fight the toxins it's acquired, she says.
Here, the seven foods to eat to save your so-called Sunday Funday.

Eggs
Incredible, edible toxin destroyers, eggs pack heavy loads of cysteine, an amino acid that can break down toxins your body hasn't, she says. Plus, eggs are high in B vitamins, which one study in the Annals of Internal Medicine found can reduce hangover symptoms. For extra B, Reinagel suggests sprinkling on some nutritional yeast flakes.

Coconut Water
"Alcohol molecules love H2O, so whatever alcohol you take in will grab water," says James M. Schaefer, Ph.D., an alcohol metabolism expert and research professor of anthropology at Union College. The result: Your whole body--brain included--is sucked dry. So hydrate, hydrate, hydrate. While sports drinks do contain the electrolytes you need after partaking in one (or two, or three...) too many adult beverages, they also often contain ingredients like artificial food dyes that don't do your brain cells any favors. A low-sugar coconut water, on the other hand, contains just as many electrolytes as Gatorade.

Ginger
If you wake up reeling from nausea, make ginger your new BFF. A small dose of ginger also stimulates a stalled, post-drink digestive system, helping to ease constipation, gas, bloating, indigestion, and even vomiting. Not a fan of the flavor? There's a pill for that. "Take two ginger capsules every hour with water," Reinagel says. Just make sure you have something in your stomach first.

Tomato Juice
One virgin Bloody Mary, coming right up! Why? When you pour a steady stream of alcohol into your body, your liver is too busy metabolizing the booze to maintain adequate blood sugar levels, according to the National Institutes of Health (NIH). Because glucose is the primary energy source of the brain, low levels can cause fatigue, weakness, and a generally pissy mood. But a glass of tomato juice packs enough simple sugars to get your levels up and running again, and its inflammation-fighting lycopene and serious hydrating factor don't hurt, either.

Bananas
It's not just taking in the extra liquid during an all-nighter that sends you on more trips to the little boys room. Alcohol actually draws water from your body's cells, creating more urine and causing you to literally flush potassium down the toilet. Low levels of potassium are linked to weak, shaky muscles and high blood pressure--all common hangover symptoms, according to the NIH. No worries, a banana can shoot your potassium levels right back up to where they belong.

Asparagus
In one Korean study, asparagus extract was found to boost levels of enzymes that break down alcohol. While the research focused on eating it before a hangover sets in (if only side orders were as readily available as cheese pizzas), scientists believe eating a serving or two the next day can still help since a hung-over body is riddled with toxins.

Coffee
Admittedly, this isn't a cure (though it is a sure-fire pick-me-up in your hour of need), but if you're a morning coffee drinker, Reinagel recommends firing up the 'ole K-Cup machine. After all, the only thing worse than a hangover headache is a hangover headache plus a caffeine-withdrawal headache. But if you don't regularly drink coffee, now's not the time to start. Coffee's a diuretic, capable of compounding existing dehydration. So for every cup you drink, match it with a glass of water. That advice doubles for drinking, but you'll remember that next weekend, right?

14 Exercises to Make You Better at Sex