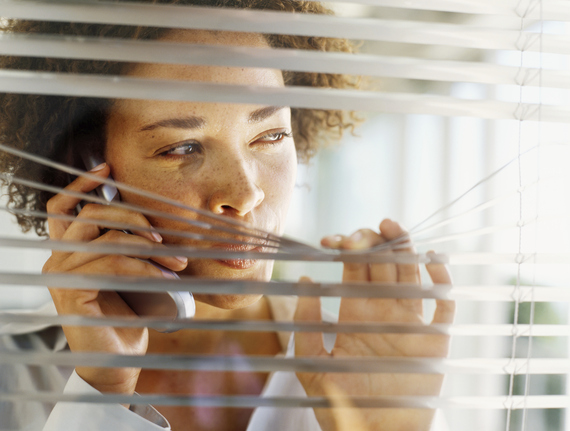 Let's be real with each other for a second: You're not on dating websites because you've seen success with love, right? You're not still playing the field because you have great luck when it comes to finding good men and women to date, right? More often than not, it doesn't work out. But that's because there's ideally only one person it should work out with!

The dating process can be exhausting and you might be tempted to throw in the towel, but I'm gonna give you a few ways to make it easier on yourself. For example, spotting red flags. There's a difference between bad habits and unchangeable characteristics. Habits can change as long as the person's willing, i.e. quitting smoking, getting better about putting the seat down, not leaving wet laundry in the wash machine (gets me every time). But when it comes to someone's soul, who they really are, changing is a long shot. Next time you start to get smitten with someone, pause for a second and check them against my list of characteristic-related red flags to run away from.

1. A hard relationship with their family.

Families are weird. We know that. Everyone's operates differently and have particular quirks only immediate family members understand. However, if the person you're dating seems to have a noticeably strained relationship with their mother, father, and siblings, something might be up. How someone was raised and how they view family is engrained into the human they become, and being with someone who is not close to or even at odds with their family might be cause for concern.

He doesn't open doors. She doesn't ask before she takes a bite of your food. He is snappy with and talks down to wait staff. She doesn't dress appropriately to meet your friends or family and doesn't bring a bottle of wine to a house party. These small things that are easy to brush-off could all lead to much bigger reflections of who they are as a person. Of course, his hands could've been too full to get the door that one time, and she may have genuinely forgot to ask to have a bite of your food, but just be alert of the small slip-ups to try and catch patterns.

Verbal abuse may not be as obvious as you think. It doesn't always have to be curse words. In fact, a lot of the time it isn't. Being manipulative, and finding ways to end up making you apologize for something you don't need to be apologizing for are big red flags. Pay close attention to how your new love interest speaks to you -- are they talking to you as an equal or are there underlying, condescending tones?

Lots of people are competitive. It can actually be a great quality. But if someone you're dating is competitive toward you, that's a whole different story. Whoever you're with should not actively strive to outshine you or one up you. They should be rooting for you and building up your strengths as often as possible. If they seem to constantly combat what you do or say in a competitive way, this could be a sign of insecurity and a generally unsupportive partner.

Some people can't help that they're always running late. It's a trait we love to hate about friends and family. But not showing up to or canceling altogether on plans is a different story. If you begin to notice the person you're dating is constantly taking a rain check or changing long-standing plans at the last minute, be weary. An unreliable person is a surefire one-way ticket to an endless stream of frustration and aggravation you don't need.

6. They can't just lay low and hang out.

That is, they have to constantly be doing something. Not once have they suggested staying in with you on a Friday night, ordering in dinner, and watching a good movie. They have a fear of missing out on being social, and can never refuse their friends' invites to dinner, the bar, what have you. Quality time is not something they cherish, and this could be a big problem down the road.

7. Something in your gut is saying NO.

I can't stress this enough. If someone you're dating does or says something that doesn't sit right with you for whatever reason, even if you can't clearly articulate that reason, always go with your gut. It may not be a flaming, bright red flag, but if it's something that makes you pause, be honest with yourself. Trust yourself first, always.

In addition to being a world-renowned comedian, talk show host, philanthropist, husband and father, Steve Harvey is the Chief Love Officer of online dating site, Delightful.com. He draws on his personal experiences and the stories that millions of people have shared with him over the years to help more people find and keep the love they deserve.