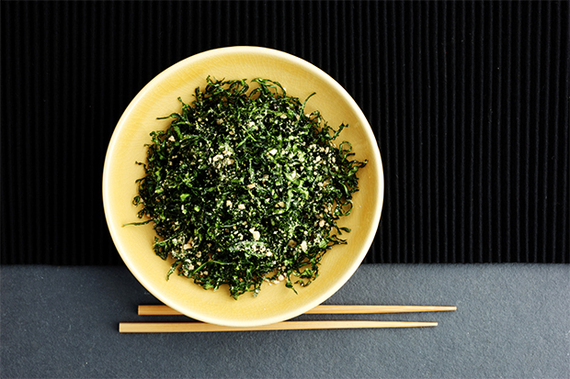 Let's rethink your grocery list. Sure, you gulp bone broth by the gallon and eat kale like there's no tomorrow -- but the real nutritional powerhouses might just be the ones you haven't tried yet. Below, seven new superfoods to know, love, and juice.

In Brief: Antioxidants and essential vitamins, plus plant-based probiotics
The Lowdown: Cabbage alone is quite the powerhouse. It has half your daily recommended vitamin C and all of your recommended vitamin K, not to mention choline, beta-carotene, and 3,3'-diindolymethane (DIM), a compound shown to prevent cancer and protect healthy tissue during radiation therapy. Turn that cabbage into sauerkraut, though, and it'll also pack a probiotic punch: "The fermentation process is essential," says dietitian Leah Mark, M.S., C.D.N., C.P.T. "Sauerkraut and most fermented products are going to have beneficial bacteria that aid not only in digestion but also in treating inflammation in the body." That's good news for those who don't eat dairy: The probiotics in sauerkraut will help maintain gut balance and a healthy immune system--no Jamie Lee Curtis-approved yogurt required.
How to Eat It: So why not just stock up on probiotic supplements? "Bacteria in the gut actually need fiber to help them thrive and create the beneficial effects that they do," Mark says. Be sure to pick up raw, unpasteurized sauerkraut, or whip up a batch yourself--it makes for a genius sandwich topping.

In Brief: The whole package--calcium, fiber, and protein, plus antioxidants like vitamin C and beta-carotene
The Lowdown: There's a reason this humble leaf ranks first among powerhouse vegetables. Sure, it's got the usual suspects, including vitamins A and C, but here's the kicker: Watercress also packs a healthy dose of calcium--plus the vitamin K you need to absorb it--as well as fiber and protein, earning it a perfect score on the nutrient-density scale. (Kale, by contrast, has just under 50/100.) Still not convinced? Research published in the American Journal of Clinical Nutrition indicates that adults who consumed watercress saw less DNA damage and higher levels of antioxidants in the body.
How to Eat It: Like arugula, watercress makes a peppery, flavorful salad--but it's just as delicious in a hot or chilled soup.

In Brief: Antioxidants and iodine, an essential element for thyroid health
The Lowdown: You know that expensive, all-natural Himalayan salt you just bought? Turns out, it might not be so good for you. "As people are staying away from iodized salt and moving toward sea salt, we're seeing more iodine deficiencies," Mark says. If you're often tired or experiencing weight gain, it might be time to step up your iodine levels--and that's where seaweed comes in. It's high in not only iodine content but also in free-radical-fighting antioxidants, which gives you another reason to hit the sushi bar.
How to Eat It: Step away from the seaweed salad, which can have up to a third of your recommended daily intake of sodium. Opt for crispy nori snacks--or, if you can't stand the taste, slather some seaweed on your skin instead. It'll fight the aging process from the outside.

In Brief: The type of antioxidants you aren't getting, plus fiber, calcium, and zinc for an immune boost
The Lowdown: Sesame seeds may be small, but don't let their size fool you. Unlike nuts and fish, which contain fat-soluble antioxidants, sesame is chock-full of essential water-soluble nutrients. "It's an unusual type of antioxidant," Mark says. "By including both in your diet, you're enabling your body to rid itself of free radicals, which oxidize the cells and cause premature aging and inflammation." Even better, sesame seeds are packed with fiber, calcium, immune-boosting zinc, and sesamin, a compound shown in clinical trails to prevent the spread of tumor cells. Move over, chia--there's a new power seed in town.
How to Eat It: Add whole seeds to salads--and don't forget about sesame oil or tahini, the paste found in hummus.

Eggs, Yolks and All

In Brief: A mother lode of nutrients, including all nine essential amino acids, choline, and omega-3's for brain and heart health
The Lowdown: Repeat after us: Yolks are not the enemy. "It's old-school to be worried about eating too many egg yolks," says sports nutritionist Heidi Skolnik, M.S., C.D.N., F.A.C.S.M. In fact, if you're eating only the whites, you're leaving behind the best part: 90 percent of the egg's nutrients, including choline for the brain and lutein for eye health, are found in the yolk, while egg whites are largely protein and water. Worried about cholesterol? New studies show that dietary cholesterol doesn't affect the cholesterol levels in the blood after all, unless you suffer from hypercholesterolemia, diabetes, or other health conditions. So go ahead, have an egg--the whole egg--and enjoy all those omega-3s while you're at it.
How to Eat It: You know this one. Boiled, poached, and sunny-side-up are all fair game.

In Brief: All the protein, iron, and B vitamins of beef--and a fraction of the fat
The Lowdown: On the hunt for lean, nutrient-rich protein? Turns out, grilled chicken isn't the only meat on the menu. Andrea Hinsdale, chief dietitian at Snap Kitchen in Austin, Texas, often opts for beef's healthier cousin: bison. In addition to supplying protein and iron, bison contains a suite of B vitamins, which keeps blood cells healthy, maintains the central nervous system, and regulates metabolism. The cherry on top? It clocks in at just a third of the calories and one-twelfth the fat of beef (USDA).
How to Eat It: Throw ground bison into meatballs and burgers, or (Hinsdale's personal favorite) use it to bulk up a hearty bowl of veggies.

In Brief: Anti-inflammatory compounds like curcumin, which may treat conditions like asthma, heart disease, and cancer
The Lowdown: If you add just one superfood to your diet, make it turmeric. "To be honest, it's way more powerful than kale," Mark says. "In clinical trials, it's rivaling drugs." She isn't kidding: Curcumin, one of over 24 anti-inflammatory compounds in turmeric, has been shown to alleviate symptoms of asthma, inhibit replication of HIV virus chains, reduce the risk of heart failure, and even fight cancer by inducing death in tumor cells--all while slowing the growth of fat tissue. Can your kale chips do that?
How to Eat It: Turmeric is a key spice in many Indian curries, but for maximum benefit, Mark recommends brewing up your own turmeric tea.

More from DETAILS:
14 Healthiest Snack Foods to Buy
The Only 5 Exercises You'll Ever Need
Shirtless Nick Jonas Explains How He Got His New Body
The Hottest Vanity Muscles--And How To Get Them
Brad Pitt Is Back and Sexier Than Ever
5 Weird Signs You're Vitamin Deficient