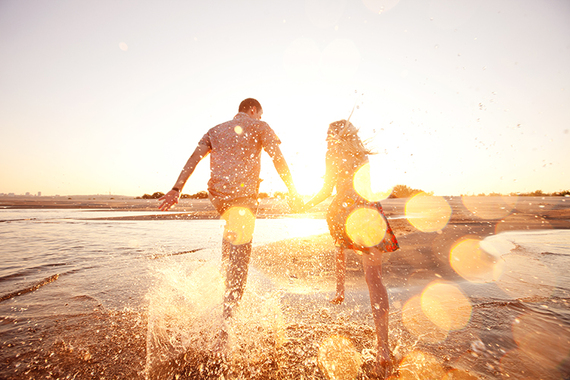 We've all met the "happy couple" that always seem to be smiling, laughing, and enjoying life to the fullest. They never seem to argue or fuss about inane things, and are in perfect harmony, forever residing on the same wavelength as one another.

And we've all asked ourselves the question, "How can they be so happy?" What is it that these happy couples do so differently from the rest of us? Do they have some secret recipe to the perfect relationship that we just didn't get the memo for? Are they simply just happier in life? Or is it something entirely different?

Finding happiness in a relationship isn't the result of random chance. It isn't likened to winning the lottery. It's the upshot of two individuals that are in sync and exhibit the same eight daily habits that help them become the wildly-happy couples that they are.

#1 -- They're grateful for each other

We get whatever it is that we choose to focus on in life. Focus on problems, and you'll see them bigger and brighter, ever-evolving even. However, wildly-happy couples don't focus on the problems. They focus on their gratitude.

Every day, they count their blessings. They're grateful for one another because they choose to focus on that rather than the problems. Sure, they also have problems, just like everyone else. But they don't live in those problems. They live in gratitude for one another.

Together, they can solve any problem, and they know that. And they would rather face their problems with each other than go it alone.

Wildly-happy couples have fights, just like the rest of the world's couples. But they never go to bed angry. They kiss and makeup before that happens. By going to bed angry, it only festers and grows deeper. And they refuse to allow that to happen.

This indicates that they can disagree on some things and even fight about other things, but at the end of the day, they both commit to set their egos aside for the good of the relationship by making up before it's time to call it a night.

In the beginning, every relationship has some element of passion to it. Over time, that passion wanes. But, no matter how long they're together, wildly-happy couples keep that intimacy alive. They kiss passionately. They touch, feeling the warmth of one another's embrace on a daily basis.

Without passion, relationships can easily die. And keeping that passion alive is no simple feat, especially when dealing with the common stresses of life. But, by kissing passionately on a daily basis, wildly-happy couples keep that initial zeal for one another alive.

No matter what happens, wildly-happy couples are in it together. The words "till death do us part," actually mean something to them. And, because of it, they say "I love you," no matter what. No matter what their differences are, it will never change that most basal fact of love for one another.

And their love grows over time. It's not a fad that just comes and goes like the latest fashions. It's a deep, unnerving love that's endless. It's magical, like the moonlit waters on a clear and starry summer's night.

Wildly-happy couples go out on date nights often. They take the time to spend it with one another because they know their time together is precious. Whether they have kids or they haven't embarked upon that yet, they hold their date nights sacred.

Over the years, it's easy to allow routine and bad habits to take over our lives. We get set in our ways and it's hard to change. But, wildly-happy couples don't take each other for granted, so they make the time to go out, no matter how brief their outings might be.

#6 -- They resolve arguments without yelling

Wanting to get the last word in or upper-hand in an argument has no place in a wildly-happy couple's lives. They resolve their arguments without yelling and without trying to win the argument, setting their egos aside.

While everyone argues, wildly-happy couples resolve to communicate their differences. They know that it's not a race or a competition to try to win something that, at the end of the day, is really meaningless in the bigger picture and grand scheme of things.

#7 -- They always think about the other's feelings

Wildly-happy couples are empathetic of each others' feelings. They put themselves in the other's shoes, thinking about just how it would feel to be them. They empathize deeply, setting the groundwork for a happier and healthier relationship.

When we can't empathize, we lack the emotional and mental wherewithal to see things through. We say things like, "You just don't get it," or "You don't understand how I feel." Wildly-happy couples do understand how each other feels, and they use that as the basis for their happiness.

#8 -- They travel and explore together

Wildly-happy couples travel and explore together. They don't have to be rich and go to far-off destinations. It could be a place nearby. However, regardless of where it is, they enjoy taking adventures together.

They also know that the world is a big place, and there's so much of it that's undiscovered to them. By exploring and discovering, they expose themselves to different cultures and ways of life, creating new perspectives that they hadn't seen before. It allows them to boost their already-empathetic points-of-view and continued appreciation for the things they do have rather than the things they don't.

Voting Made Easy
Register to vote and apply for an absentee ballot today
Register now
More:
healthy livinghappy coupleshabits of happy peopleValentine's Day
Newsletter Sign Up
The essential guide to taking care of your mind and body
Subscribe to HuffPost’s wellness email
Successfully Subscribed!
Wellness delivered to your inbox