This week, President Obama spoke at the dedication of the 911 Museum, which opens to the public on May 21, 2014. The museum is a very personal monument to the lives of those Forever Fallen and Forever Remembered in this tragic chapter of terrorism and U.S. history. There you'll see a red banana, like that worn by Welles Remy Crowther, who personally saved at least a dozen lives before losing his own life in the collapse of the South Tower of the World Trade Center. The names of nearly 3000 people are inscribed on bronze panels. Personal affects of those lost are on view, and the Survivor Tree -- a callery pear tree that was nursed back to health after the attacks -- is also prominently displayed, along with tridents from the steel façade of 1 World Trade Center.

What you won't see or hear about at the museum are the stories of Stu and George -- two heroes who saved as many lives as were lost on 9.11.01. These two men were the heads of security at 3 World Trade Center (the Marriott World Trade Center) and the Millennium Hilton, which stands next to the World Trade Center and side-by-side to St. Paul's Church.

On September 11, 2001, Stuart Yule, the director of security at the Millennium Hilton was sitting at his desk, when he starting hearing screams through his walkie talkie that a plane had hit the North Tower of the World Trade Center. He walked outside to see pedestrians already blocking the sidewalk with their cameras, even as debris from the flames was raining down upon them. Stu acted quickly. He had one of his security officers go outside with a bullhorn to clear the area for the emergency workers, and he ordered a partial evacuation of everyone in the hotel, down to the lobby. To Stu's thinking, "The lobby gave me a control point with the amount of people, where I could either send them back upstairs to their rooms or completely evacuate." Almost everyone was in the lobby before the second tower was hit, only 15 minutes later.

George Compas had only been the director of security at 3 World Trade Center, the Marriott World Trade Center Hotel, for about seven weeks, when the terrorists attacked. George immediately suspected terrorism when he heard that a plane had hit the North Tower, and he knew he had to act quickly when he was informed that the engine from the jet was lying in his pool on the 18th floor. With the help of firefighters and police officers, George's security team, along with a few managers from the hotel, took master keys and went room to room, while the hotel intercom system blared out instructions for everyone in the hotel to meet at the fire command station. The team formed a daisy chain directing everyone out of the building, including people who were escaping through the bridge that connected the North and South Towers to the Marriott Hotel.

Over 3,000 guests and staff were evacuated from the Millennium Hilton and the Marriott Hotel on 9/11 safely, along with many people from the World Trade Center Towers -- thanks to the preparedness of the security teams, and the fast decisions that were made by George and Stu. Both men assessed the situation early, had pre-established systems for an orderly evacuation, and got their hotel guests and staff out of the buildings and to safety in under one hour. The evacuations were initiated within minutes of the first attack at 8:46 a.m., and were complete well before the collapse of the South Tower at 9:58 a.m. Imagine having a one-hour window to empty out skyscrapers that are at 90-plus percent occupancy! Out of the thousands of guests and staff members in these two hotels, only nine people were unaccounted for at the Marriott, according to George Compas, in my interview with him on May 7, 2014.

Like so many heroes of 9/11, George Compas was not going to leave while there were still so many in need of help. According to George, the assistant director of human resources and the assistant director of engineering at the Marriott refused to leave as well, even though the fire chief had ordered them to. They were still assisting people who were fleeing the towers, when firemen came running into the command center, cursing and yelling for everyone to get out because the tower was coming down. They made it as far as the front desk before getting knocked down from a blast of wind. George describes what it felt like after the collapse, saying: 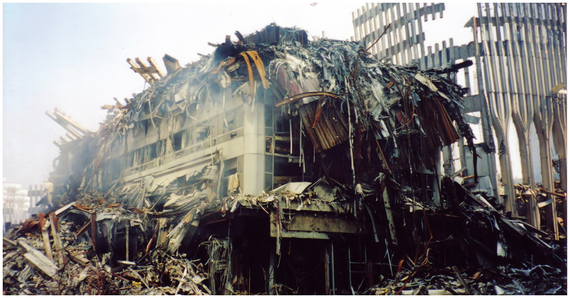 Photo of World Trade Center 3 with remains of WTC1 (left background) and WTC2 (right foreground) visible. Taken by me in September, 2001. (This photo is in the public domain on WikiCommons.)

What saved their lives that day was being in the auxiliary addition to the hotel, which had been constructed of steel, instead of poured concrete.

George and his team continued to save people, passing two women who were screaming and frozen in shock, hand by hand over the steel beams, where the floor had been blown out. They were ordered into another building to start washing up, when the rumbling from the second tower began. George and his team ran out and headed toward the Staten Island ferry. They watched the second tower collapse from the relative safety of the ferry landing.

In Staten Island, George's sister-in-law offered a home where over two dozen people showered and dressed in her clothes before heading home later that evening.

If you visit the Millennium Hilton or the new Marriott today, you might not realize that you are being served by staff members who owe their lives to Stu and George. I know I didn't when I checked into the Millennium Hilton a few weeks ago. I stood in my hotel room at the Millennium Hilton, overlooking Ground Zero, gazing with sadness and pride at the Freedom Tower, Reflecting Absence in the eternal waters of the twin waterfalls. Skanska cranes were actively assembling the Oculus Building -- where 200,000 commuters will travel daily and retail shops will be buzzing. But if George, the bellman, who helped me with my bags, had not proudly told me that he had been with the hotel from the day it opened in September 1992, and was looking forward to retiring soon, I might not ever have been curious enough to seek out Stu and George's stories and to interview them to discover just what made them so sure that they had to act so fast -- particularly when other security heads made the wrong call. I also met Scott Beatty, a waiter, who had been at the hotel since the beginning. Scott owes his life to Stu's security team, who refused to let him get his things from his locker before evacuating.

I don't know the names of any of the other guests and staff members that Stu and George saved on that sacred, sad day. But looking into the eyes of Scott the waiter and George the bellman makes me very grateful that Stuart Yule and George Compas -- two solid, prepared heroes were in charge of the hotel security. I feel very honored to have shaken their hands, and to have thanked them on behalf of all of us, for their prescience and their prompt, decisive decision-making and plan of action that day.