"There are so many more ways to be a twenty-something, it used to be get your job, you get married, boom you're done. (Now) Am I back at school, am I working? That's part of the reason it's so splintering: no one knows what their path is, so you feel like no one else is on the path with you. You feel like, where the hell am I going?" That's what Karl Hinze, a SUNY Stony Brook graduate student, told me as I walked through Fordham's Lincoln Center campus. We were both there for the "Lost? Twenty-Somethings and the Church" conference held by The Francis and Ann Curran Center for American Catholic Studies and The Fordham Center on Religion and Culture. Like Karl, I have the same question: where the hell am I going?

Driving up from Durham, NC, to attend this conference, the question mark in the title, "Lost?" struck me as odd. As if it wasn't assumed that I, a 23 year-old graduate student was in fact lost. Rather, the goal was to ask whether we were lost. These generation anxieties make me snicker because they never stop. The Hebrew Bible and even some parts of the New Testament are riddled with the older generation's worries about land inheritance and the continuation of tradition. Plato muses, like any good curmudgeon, that the young people " ... disrespect their elders, they disobey their parents. They ignore the law. They riot in the streets inflamed with wild notions. Their morals are decaying. What is to become of them?" In a markedly less geezerly turn, the people behind this conference had enough respect to ask us twenty-somethings a question instead of give us a lecture. After twenty years in classroom lecture settings, this was refreshing.

The Times Are Changing

Young people are leaving the Church or -- worse -- becoming ambivalent toward it. I see it everywhere. It's as if I can no longer call myself "Catholic," but say "I grew up Catholic" to avoid the impression that I would ever participate in such silliness. David Campbell, professor at Notre Dame and co-author of American Grace, spoke to this clear drop off in religiosity. "Politics is quickly becoming the reason why young people are leaving religion," he said, "It was especially rapid during the late 80's and early 90's." Campbell compared that time period with the evolution of the Religious Right and the continued rise of religion in politics over the last twenty years. Campbell's was an argument for reclaiming the Church from the crazies, which means pulling religion out of the political sphere. "The church should still be prophetic, but avoid anything that could be seen as partisan politics," Campbell said. The "Catholic" brand is often associated with being anti-woman, anti-gay, and anti-physician assisted suicide. To assert my 21st-century bona fides, I have to insist that I'm not that kind of Catholic. But why?

Those of us who are already self-flagellating, crusade-supporting, meat-free-Fridays Catholics know the answer instinctively. The minute I tell someone I'm Catholic I become the public face of the Catholic Church and must defend against myriad verbal wallopings from my secular friends and Protestant brothers. The hierarchy of the Church sends me, whether they intended to or not, to do the public relations work they have grossly failed to address since the Boston scandal broke. I've had practice, but many people my age haven't had the luxury of sitting in theology classes for six years.

Therein lies the issue, which Fr. Robert Beloin, Yale University's Catholic chaplain, brought up at a later conversation. Young people simply don't have the language to talk about the Church with any kind of theological vigor Fr. Beloin says, "One of the takeaways from today, make the decision not to write off young people as invisible. So much of parish life is CCD, kiddy Catechetics, senior citizens programs, and young adult programs are invisible." I couldn't agree more. It often seems like the Catholic Church kicks us out after college and tells us to come back when we have kids.

The disconnect is all too clear: We are the age group that spends the most time with twenty-somethings, the demographic the church is hurting for in the worst way. Though they need us, we are by and large ignored and ill-prepared to face the slings and arrows of our secular peers. Millennials are expected to apologize for a hierarchy that wants us to be a part of its ancient tradition, but has made no meaningful effort to include us. It's like playing soccer when your coach is on the wrong field, giving orders to other teams while our opposing team sends us to the hospital.

PHOTO GALLERY
Photos From Lost? Twenty-Somethings and the Church

The next major disconnect that was brought up at the conference resonated with my generation. Bill McGarvey, a singer-songwriter and former editor of BustedHalo.com, discussed the difference between digital immigrants and digital natives. Digital natives are at home with all the wires, social networks and screens in our lives. It's the pool we swim in. Digital immigrants -- who are generally from older generations -- walk on the Ellis Island that is the Internet. This time, they aren't Americanizing their surnames; they're creating "avatars" to be their online persona. The digital world is Generation Y's world, and the older generations are now crossing the border.

McGarvey discussed how this divide is seen by young people today. "Media and popular culture, with the help of the internet, is transparent, unfiltered, democratic and collaborative,"he said, "The church culture we live in ... is not transparent, [is] deeply filtered, not democratic, and not collaborative, and it's a clear sort of rubbing point between these two cultures." The Church, McGarvey says, has humorously flipped the parable of the good shepherd. He says, "[it's] been turned inside out and the reality is the reverse. The church seems more concerned with the one remaining sheep than the 99 roaming the wild."

This is an important point: it is easy to bash the Church hierarchy. But most of the Bishops and Cardinals don't understand the digital world twenty-somethings live in. Author and education reformer Ken Robinson once said that when families immigrate to a country where a different language is spoken, their children play a key role. The children usually learn the language and customs first, normally through socializing institutions like schools. They're the ones who explain and translate things to their parents. The same holds true today, where young people have to sit down with nuns and priests to explain how the digital world works and how it can be used to reach young people. This rests on the assumption that they are actually willing to listen, which I pray they are. Even while writing this story, a nun thanked me for teaching her how to use doodle.com, a calendar tool, to plan meetings with people who have busy schedules.

But Aren't We All Sinners

What happens when a couple inquires about getting married in the church and both people list the same address? Sexuality and Catholicism generally don't mix well in public. Donna Freitas of Hofstra University and Colleen Carrol Campbell, an author and columnist were the experts on the panel that dealt with this question, and those like it. Both women had done extensive research on sexuality and religion among young people. Freitas pointed out that relationships are changing, that many young people participate in what is called "hook-up" culture. She graciously provided a definition for everyone who doesn't live on a college campus: "Some form of sexual intimacy. Brief, vague, emotionally shut down to try to remain sexually active." These kinds of relationships are widespread because they maintain emotional safety. People my age get to pretend something doesn't affect them when in fact it profoundly does. As it was pointed out on the panel, all kinds of intimacy affect both the man and the woman, regardless of attempt to keep things emotionally distant.

Why are we doing this? Freitas has found that it's "a culture that no student is happy with." Campbell suggested that we need to look back to the divorce rate only a generation ago. "They have a desire for lasting love and a terror," she says, "Divorce has decimated this generation. We need to show people a model of happy couples."

How do we bridge the gap between boomers and millennials? The answers are complicated. But I have a few suggestions. There need to be more conferences like the one at Fordham. Not only is it refreshing to see a few young theologians in a sea of gray hair, such conferences demand thoughtful consideration about topics that affect both generations in ways that are at once quite different and closely related. Other, more programmatic approaches encourage activities like Theology on Tap. The Church hierarchy's response came up repeatedly during the conference. When are they going to listen? What will they do then?

Ignore the hierarchy for now, they will catch up eventually. Start the work on your own: no one needs a priest's permission to evangelize. Joseph Nuzzi, a pastoral assistant in New York City, says the hierarchy "can be managed, but they are a liability. We have a bad image in the media and the hierarchy isn't helping us right now."

Intergenerational dialogue starts with friendships. How does someone over 40 or 50 form a friendship with a twenty-something? How do they relate? If you see it more as a cultural divide than a generational divide, it's doable. Mutual respect bridges cultural divides. It doesn't have to be hard. I'm looking for mentors, as are millions of my millennial peers. Google can only teach us so much. Boomers have the experience we want to learn from, but they have to be willing to learn from us too. Remember, you are immigrants in our world. But you can teach us of a world that Peter Maurin, the co-founder of The Catholic Worker movement once said, "a philosophy so old, it looks like new." I'm not quite sure we have a chance at roping these twenty-somethings in with the Baltimore Catechism or the Latin Mass, though some are trying. Go back farther in time, to the labor of St. Benedict, the care of St. Francis, and the expression of Gregorian chant. 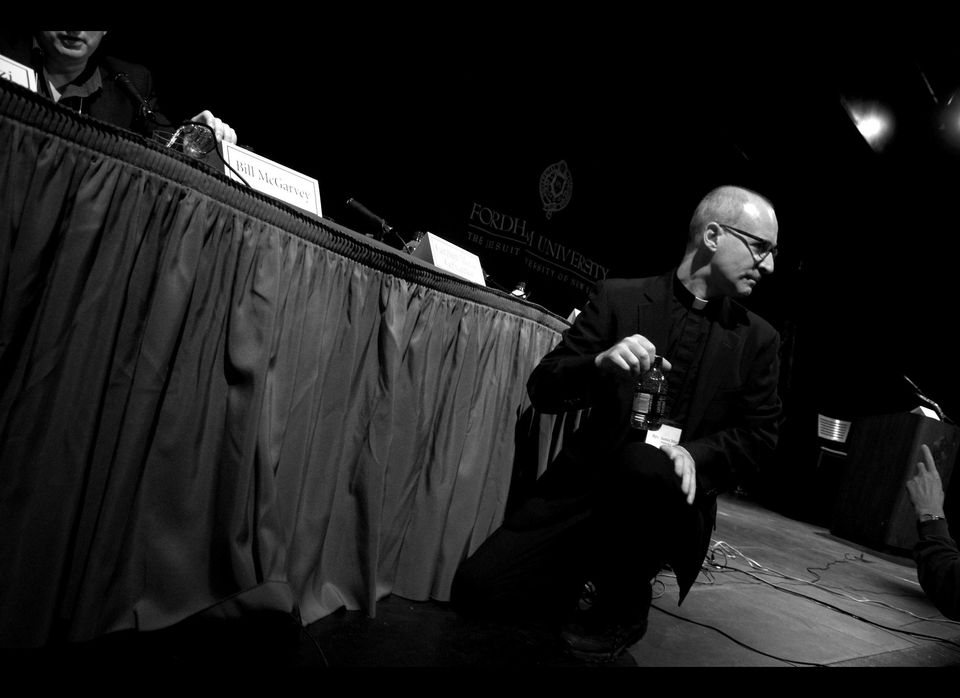 1 / 7
Fr. James Martin
Fr. James Martin S.J. is the cultural editor at America Magazine and the author of The Jesuit Guide to (Almost) Everything. The conference was held at Fordham University's Lincoln Center campus on Jan 28-29th.