According to some estimates, as much as 40 percent of fish caught around the globe is discarded at sea, dead or dying. We can't afford to continue this wasteful practice. Stopping the unnecessary squandering of nontarget fish in many U.S. fisheries and reducing the needless incidental killing of untold seabirds, whales, and other marine life by indiscriminate fishing gear is central to a new, national approach to ecosystem-based fisheries management. 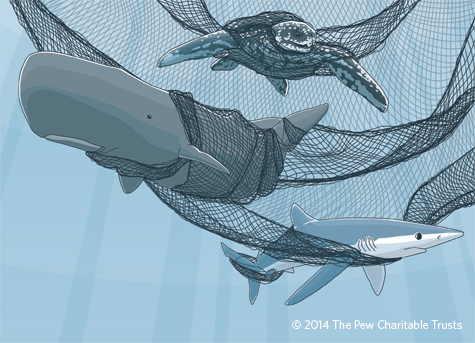 Fish have few natural refuges from today's trawlers and industrial fishing fleets. Our modern, high-tech ability to find and catch fish has compounded an age-old problem—the incidental catching and killing of ocean wildlife while fishing for popular sport and commercial species. This waste, also known as bycatch, is widespread in U.S. waters. In fact, the National Oceanic and Atmospheric Administration, or NOAA, estimated in 2011 that "17 percent of fish caught commercially [in U.S. waters] were harvested unintentionally." This has serious economic and ecological consequences.

Economically, bycatch equates to lost opportunity—precluding potentially more valuable uses of fishery resources and reducing future productivity by killing juvenile fish before they can mature and reproduce. In a recent review of NOAA bycatch data, researchers at Oceana found that "bycatch in the U.S. could amount to 2 billion pounds every year, equivalent to the entire annual catch of many other fishing nations around the world." 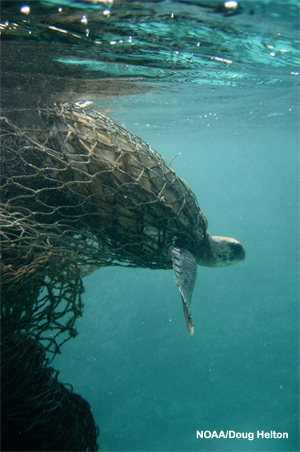 The ecological costs of bycatch are just as devastating. Off the California coast, for example, gill nets—often as long as a mile—are submerged for hours at a time to catch swordfish and thresher sharks. These nets also entangle and kill other animals the fishermen never intended to catch, including whales, turtles, sharks, dolphins, and many species of fish. In other words, bycatch is bad for those who fish and even worse for the environment.

What has happened to the Atlantic herring fishery is a prime example. This is one of the most important fish in New England's waters, providing food for predatory bluefin tuna, whales, and seabirds. Atlantic herring has been caught commercially throughout the region for centuries. The rise of modern midwater trawlers, however, has made the problem of bycatch in this fishery worse.

Powerful trawlers, towing nets capable of capturing half a million pounds of sea life in a single pass, are among the largest vessels fishing along the Atlantic Coast. This type of fishing also scoops up a host of other economically and ecologically important species. Independent fishery monitors report that hundreds of tons of young haddock are ensnared in herring nets before they can reach the size that will benefit other fishermen. Data from NOAA records show that over the past two years, the bycatch from trawlers accounted for over 10 percent of all the haddock caught in New England. This is a serious problem for fishermen who depend on sustainable populations of haddock.

Managing fisheries on an
ecosystem-wide basis
would include meaningful measures to reduce bycatch. To restore and protect ocean ecosystems, federal fisheries managers must proactively adopt management measures to address this pernicious problem. Congress can help these efforts by working with NOAA leaders to create policies that will:
These reforms would provide fishery managers with
stronger policies
to address bycatch in federal ocean waters. These steps also would support efforts by state and regional officials around the country to rebuild currently depleted species in state waters. In New England alone, millions of taxpayer dollars and
countless volunteer hours
have gone toward regional efforts to restore habitat for river herring, an effort that is being undermined by ongoing bycatch of the species at sea.

Reducing bycatch must become a key element in our nation's fishery law if we want to ensure healthy ocean ecosystems and fully realize the economic potential of our commercial and recreational fisheries. The waste of billions of pounds of fish and the indiscriminate killing of thousands of marine mammals, seabirds, and other types of marine wildlife must end.