"Eternal vigilance is the price of liberty" is an oft-used and abused quotation, oft-attributed to Thomas Jefferson -- but there is some controversy there. But regardless of who first said it, the warning applies to reproductive rights as much as anywhere else.

Right now, as for throughout the four decades since Roe V. Wade in 1973, attempts to chip away at women's reproductive choices, especially but not limited to abortion, are constant and widespread. The dramatic squabble in Texas that brought Wendy Davis to nationally prominence is just one, and continues with many a legal twist and turn.

Other states around the nation have similar ongoing struggles; the fights go on and up, sometimes all the way to the Supreme Court, which is constantly being asked to rule on abortion-related cases, at this point including use of the "abortion pill" and the ACA/Obamacare contraception mandate.

If that weren't enough, in the roiling world of health care business, hospital and health system mergers are adding to the restrictions and battlefields when Catholic institutions' anti-choice policies dominate, sometimes restricting access to care in entire regions.

As the chair of a leading pro-choice physicians' organization recently said, "In recent years, we have witnessed an unprecedented erosion of reproductive rights and dangerous incursions by politicians dictating how medical care is provided. It's been maddening to see this happen and witness the harm it does to our patients." These doctors hold out hope in the form of new proposed federal legislation that would at least invalidate the sort of medically-absurd restrictions now besieging women, doctors, and courts.

This is unavoidably a political issue, and in a recent Wall Street Journal opinion piece, a Republican strategist laid out his advice for beating any pro-women candidate -- or even a woman herself (Hillary): Stay away from reproductive health issues during campaigns at all cost. "The model for success could be Republican Bob McDonnell's victory in the Virginia governor's race for years ago. Mr. McDonnell is pro-life, but he campaigned as the 'jobs governor.' He carried the women's vote by 8%." In other words, be aware that women tend to be strongly pro-choice, so be sneaky, maybe even lie -- until you get into office. Thanks for that candor -- and warning.

There are of course many good pro-women, pro-choice groups fighting these trends. Some of them are even Catholic. Such organized efforts are essential, and should be supported, as no amount of logic and scientific fact seems to persuade the anti-choicers that their tactics are counterproductive even to their own goals, but simply make life harder for women -- especially younger and poorer women.

The other uncomfortable fact is that the vast majority of anti-choice activists and politicians are male. Most men are pro-choice to varying degrees, but unlike the anti-choice activists, are relatively quiet about that. Perhaps that can change a bit. A new campaign called "Men Who Trust Women -- as in, trust women to make their own health and reproductive decisions -- aims to get men of all fields to speak up on this topic. I've signed on, and my neighbor and fellow HuffPost blogger, Craig Newmark of Craigslist, has too -- and wrote about it here. Read the many comment on his post -- although some are supportive, some call even this kind of statement of solidarity "male-bashing" and the like. Such reactionary remarks simply remind us how important the educated, more-silent majority speak up. And that we support those who do so.

So, take a look at the first 40 men who have given their name to Men Who Trust Women. It's an impressive group, other than yours truly -- doctors, scientists, artists, politicians, you name it. Many of us might differ on other issues but we agree on this one. So, on behalf of other men who trust women to do what's best for them -- and to have the right to do so -- thanks for reading this one. And -- please join us. 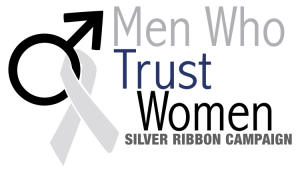