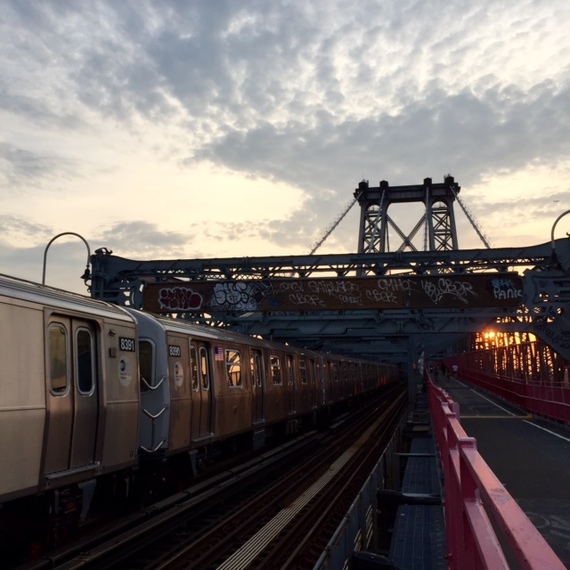 I was excited to see Dolly Parton in concert.

A friend had gotten tickets for the Saturday, June 25 nighttime concert at Forest Hills Stadium in Queens, N.Y. Both of us from different parts of Brooklyn, we arranged to hook up at the Court Square subway station in Long Island City. From there, we pushed ourselves into a crowded 7-train headed towards Flushing. It wasn't long before we realized the 7 doesn't stop at Forest Hills, so we got off at Roosevelt Avenue and hopped on an E train.

"Stand clear of the closing doors," shouted the conductor over the PA system.

The car we hopped on wasn't crowded, maybe 15 or 20 people at most. It was the second to the first in the front of the train. Inside, the walls shined a pristine reflective silver, the air was cool. The seats had the usual orange to yellow hues. We both stood, face to face, holding onto the pole in the rear section of the car. We talked about Dolly and then admitted how ignorant we both are when it comes to getting from point A to B in Queens.

"I don't know east from west in Queens," I said. My friend reminded me Brooklyn, the city's biggest borough, is complicated too. There's no easy consistent grid in either of the outer boroughs, at least when compared to Manhattan.

After just a few seconds, a man wearing dark jeans, a white button-down shirt, and white tennis shoes slipped past us and sat down in a seat at the very rear of the car.

In the seat directly across from him sat a woman in a flowery print sundress.

There's an important point I need to make here. New Yorkers have the innate ability to ignore daily life around them when they ride the train. It's sometimes better that way. Don't feel guilty about rushing and grabbing a seat, tune out people begging for money and play deaf for the occasional bad singer, dancer or holy roller preacher. Do not engage or show pleasure, unless it's sincere. Being outwardly annoyed is fine, but don't show hints of worry resulting from another's behavior and most especially, never reveal that you are truly afraid. Like most everyone on that particular subway car, the woman in the flowery dress acted like a New Yorker, her stare focused straight ahead. She was simply, going on about her business, heading deeper into Queens on the train.

When the man in dark jeans sat down, another guy walked past. He was wearing black baggy sweats, a gray shirt with some sort of design on front and a red baseball cap.

He stopped and positioned himself in front of the man in the white shirt and began to speak softly. As he spoke, I noticed he was glancing back at the rest of the passengers in the train.

"Why you looking at me?" I think is what he said. A classic subway confrontation. It didn't seem as if the two knew each other, but the guy with sweats was slowly getting up in the other guy's face. A couple of times, he put his hands just above his crotch, pulling at his pants.

The man who was sitting, voice raised slightly, said something to the effect of 'I don't know what you're talking about'. His accent sounded French, maybe Haitian. He was speaking fast.

I've been in New York City for over 25 years and ridden the train at all kinds of hours and seen all manner of heated situations; yet, there have only been a few times I felt genuinely spooked. For some reason, at that moment, something sparked nxiety. This was New York City, but it was only one week since Orlando, and talk of terrorism had been fomented by world events. But this was just a simple confrontation. Still, the hushed tone, maybe the body language, something sparked a sense of urgency, worry: I needed to get away from whatever was unfolding in the rear of that train car. The confrontation continued.

The woman who'd been staring straight ahead broke her gaze, glanced my way, shook her head, then attempted to discreetly hoist herself up and walk away. I looked at my friend and cocked my head to the left towards the front of the car, motioning for him to follow me. As we moved towards the door at the front end of the car, other people took note and quietly and discreetly got up out of their seats and slipped forward towards the door to the next car, none of them saying a word.

When my friend and I got to the door, a slight, elderly woman just ahead of me turned around and looked up at me, her eyes pleading, "Will you please please open that door?" she said, the shrill tone of her voice rising an octave with each word.

If you look down as you are passing through the narrow footbridge over to the next car, the tracks whirl by. There is also the deafening sound of clanking and occasional grinding metal. Electrical flashes mix with a familiar dank scent, all reminders of just how foreboding a subway tunnel can be.

Behind the older woman was a doughy-looking man wearing a baby carrier. He clutched his infant's head and looked back. His eyes were open wide like his child's.

Just as quickly as everyone had crossed over to the next car, the door hurled open and this time, the man who was being confronted sped past us towards the front of the car.

Looking back into the car we'd just left, the man with the sweats came lumbering towards our car.

"We can just get out at the next station," said my friend nervously.

But that might be a few minutes. This E train was running express.

Estimates put the trip from Roosevelt Ave to Forest Hills at around 15 minutes. For the next ten or so minutes, we were all trapped in speeding subway car with a man we think has a gun.

Imagine if you will, riding a bicycle up the steep incline of the Manhattan Bridge. You pedal up to the midway point, and then decline helps propel you to the bottom.

You pedal and faster and faster you go down the other side, the wind blows hard in your face and just as you reach the nirvana speed you suddenly think that your front wheel is loose. You hyper-focus for a few split seconds and your mind tells you that if you try to stop, the instability of it all will cause the fork to disconnect from the front wheel. You will be hurled to the concrete and the impact will rip flesh from your bones, your face and your limbs may snap and your skull could crack. You will bleed profusely. It will be painful.

This was the level of fear that had infected passengers on that E train in all of two minutes. Mere thoughts of a bullet passing through someone's body does that to people in confined spaces.

By now, everyone was clustered near the head of the first car. The man who was being pursued was standing near the operator's booth. The guy we were all thinking had a gun, had also made his way into the front car. No one moved, it was as if we had transformed into deer staring at headlights or mannequins in a department store window display.

"Why y'all running?" he said softly.

Then, the cluster of hysteria slowly broke apart, many headed back to the car they'd just left. The guy being pursued made it past the guy in sweats, pulling and pushing his way in front of others, running on to the next car. The train kept rumbling through the dark tunnel and then, suddenly, the lights from a subway station poured in: we were in Forest Hills.

The woman in the flowery dress was right beside me and my friend as we waited for the conductor to open the door. There was a delay. Someone had been alerted the conductor and the police had been called. When I looked towards the front car, I saw the guy in sweats making his way back to our car. The door still wasn't open.

"Open the fucking door, please open up the door!" she screamed over and over, he New York City calm shattered.

Then, the doors slid open, and out ran the guy we thought had a gun. Looking towards the rear of the train, we saw the guy with the white button down scoot up another set of stairs.

At almost that same moment, New York City police swarmed the station. A man came up to the police and said he was Haitian. He told police the guy being pursued told him quickly in French that had no idea why the guy we all thought had a gun, had confronted him.

Several people spoke to the police and gave descriptions. My friend and I told officers that it was as if we'd lived through a scene from a 1970's film about New York City. But, there was one key piece of evidence missing from this story.

"Did you see the gun, did you actually see a gun?" asked a young female police officer.

Everyone in our panicked group of passengers, including me, said no.