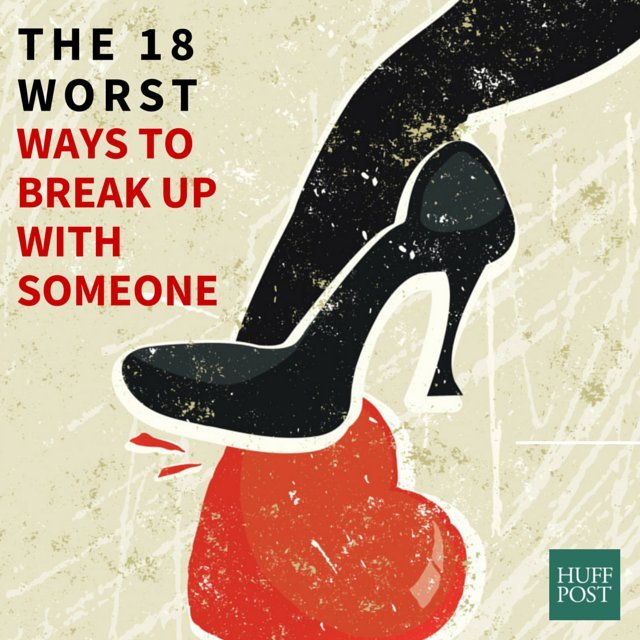 They say that breaking up is hard to do, but if the stories below are any indication, it's clearly a lot harder for some people than others.

Below, 18 breakup stories that make an awkward hug goodbye and the ol' "it's not you, it's me" spiel sound better than ever.

1. "A friend of mine was studying abroad in Spain and her parents paid for her boyfriend to go visit her for a week. He returned to the U.S. and dumped her on Skype three days later because he said he wanted to be 'free' his senior year."

3. "Before a job interview. Super shitty."

4. "The day before they fly you to New York to see them. Also super shitty."

5. "Breaking up on the dance floor at your friend's wedding reception."

6. "Having an S.O. coordinate with their superintendent to stage a building-wide fire drill to prompt you to leave their apartment in a jiffy and having them block your calls and texts immediately thereafter."

7. "Texting. Really, anything that isn't in person when it's possible to do it in person is bad."

10. "A friend who was in a long-distance relationship was broken up with on Skype the night before her birthday. The asshole didn't even realize the next day was her birthday."

11. "Taking advantage of vague relationship status -- or suddenly claiming it was vague -- only to completely disappear without the courtesy of a conversation an actual breakup would require. It's ghosting, but shittier."

12. "After you move somewhere to be with them."

13. "Breaking up with you on the plane ride home from your long-planned Florida trip because, and I quote verbatim, they 'couldn't bring themselves to dump you on Disney property.'"

14. "A friend of Puerto Rican descent planned her first trip to Puerto Rico and during the trip her husband asked her for a divorce. Not close to the end of the trip, but close to the beginning of the trip. Their marriage was on the rocks but come on, totally not the right time."

15. "As they're dumping you (over Skype, no less), they say that they had been saving for your future engagement ring, as if this breakup (and no ring) is some form of punishment for bad behavior."

16. "Just weeks after you signed a two-year lease on an apartment together."

17. "Over email, so the godawful news is sandwiched between spam and weekly deals from Modcloth."