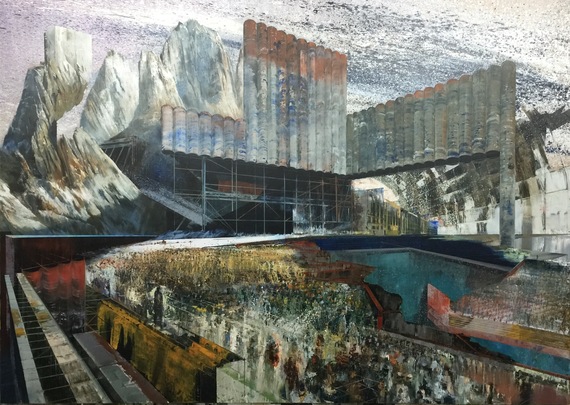 Tim Kent's show with Slag gallery at Volta included a collection of paintings that he meticulously labored over every day, for a minimum of 12 hours, for the past three years. The finished works are a testament to just how intense Kent's process is.

A visit to the artist's studio where lines of tape stream across his paint covered canvases to section off one part of the work from the other helped illuminate his industrious process. There are no windows to maximize the amount of workable wall space as he moves from painting to painting. There is a yoga mat on the floor on which Kent takes carefully timed naps while layers of paint dry. He has a system of rulers across several of the paintings too, carefully counterweighted with partially full bottles of Poland Spring. Each ruler rests at the vanishing point so that they can be moved as needed like the hands of a clock. The idea, the artist said, came from Dutch painter Johannes Vermeer who would set his vanishing points increasingly further away as he aged.

Like Vermeer, famed for his depictions of domestic interiors, Kent's work has similar structural and architectural lines. Yet as opposed to being confined to one room Kent's paintings are geometric worlds that feel as if you could walk right into and disappear.

Jeffery: There is so much spatial structure to your paintings. Are they architecture based?

Kent: I was doing architectural interiors before this. When my gallerist Irina finally said you can go to town, I knew what I wanted to do, it was just a question of figuring out how to get there. Now I'm beginning to see options as they open up as I keep trying out new little things. Part of me wants to be that big painter with the big brush but at the same time this is really engaging stuff for me. It's really noodly but I like it. I like the investigation of the surface. I think it's fun and it's challenging as fuck. But it's more geometric based rather than architectural. Architecture is the easiest thing for me to work to. I'm more interested in taking the format of the canvas as a rectangle or a square and beginning to create an undulation of space that is actually pretty flat but it's modeled to look like there is space in it. Yet if you touch it there's nothing there.

Jeffery: There's a lot of depth. Your paintings seem to keep going and going.

Kent: Yeah. It's almost too illustrative in a sense but at some point as I keep reducing I'll be able to get more to a depth versus surface situation.

Kent: This one became very illustrative because I kind of got stuck on it and I began to try to figure out ways to move through it. You have four or five different types of painting happening immediately and then it's about integrating them and finding where they relate to each other.

Jeffery: I love that there is so much structure and then a tiny patch of chaos with a sectioned off splat of tiny, speckled dots.

Kent: I like that too. I try to find ways to make sense of things we can't see. One of them is radiation. How do you talk about radiation in terms of representation? One of the ways I imagine it to be is this sort of field. These fields of speckly things that happen and that's probably part of how we think about the world. And I also think that the specks are a completely contrary thing to the rigor of the geometry. They offer a nice noise.

Jeffery: And there is a juxtaposition of the hard geometry versus nature.

Jeffery: With all of the compartmentalization and meticulous detail, how do you know when the painting is complete?

Kent: I think it can't really be finished. You know when you're blowing a bubble and you're blowing it up and you know that any second it's going to pop? It's like getting to that point and you get a second to look at it and you're like, 'Wow. That's a really big bubble. I can't go any further.' That's pretty much where it finishes. This one (points) might be about to pop actually.

Jeffery: If I didn't know that you were still working on it I would think it was already a finished piece.

Kent: Yeah. There are tiny little issues on it that I need to work out. Just fixing up little spots that are really annoying to me. Like I think this needs to be richer and some organization has to happen there. Things like this bug me. But that's about it really and then I can let it go. I want it to be a piece where you can be sitting around talking to people and then it gets into your imagination for a while and you can kind of space out on it and then resume your conversation.

Jeffery: How do you determine the shape the painting will take?

Kent: It's about beginning to pull out possibilities and seeing how you can formulize them or not. Ideally I would like to get them all simplified to line work but that would take time to strip away all the years of bullshit that I've put into my expectations of what painting should look like. And as a commercial artist it's hard to make jumps that radical. The jumps have to be made in the process of making the works over time.

Jeffery: Is there an element of chance to your work?

Kent: It's the negotiation of what happens as an accident automatically and what happens as you rationalize it. So those red spats in the background underneath that building... Are they walls? Are they colors? Are they part of the sky? How do they work? Where is the narrative value? Is that a ski slope? Is that a little village? I don't know yet. Are these people or are they bits of hay? The worst part about deconstructing reality is, as a species, we're deconstructing everything and we're faced with the issue of our deconstruction. This is a partial reaction to the Syrian refugee crisis, which we'll be seeing more and more of, I think, in the coming years where we have this displacement of people due to the environment. And I think that's what this piece has started off as being and it will be.

Jeffery: Did you have that idea in your head when you started painting or did it just transpire?

Kent: I saw a photograph in The New York Times of a huge mosque with all these men praying in this same sort of motion and I was like, this is amazing. I started looking at each image of each man and I began imagining a story for him and it all sort of came together. I began to think about it and I thought I would do my rendition of that photograph in this part of the painting and then I realized that it's actually about these people being confined into a situation and then it just emerged that it was somehow a reaction to this huge thing that's happening in the world right now with people getting displaced like crazy. It's madness.

Jeffery: Where do you begin when you're faced with the blank canvas?

Kent: I was talking to a painter friend of mine about paintings and where they go. And when I make a drawing that I get frustrated with I erase it. And I kind of imagine that's what a blank canvas is. It's like the very end part of the painting. It's the absolute. It's the final product. So by making the painting and getting it someplace I'm actually going backwards through the process of making. So the second thing happens as just a big mess that's being made in order to get a step back in time from that final blank canvas. All of a sudden it's a system of putting back into place the bits of the explosion.

Kent: Yes! What I'm trying to do is get to the beginning of the story where the key players are emerging and everything is getting started. I'm beginning to figure out what the place looks like before it explodes.

Jocelyn Jeffery is a writer and a yoga teacher working and living in Venice, California.