This holiday season as people were complaining about having eaten too much or lamenting their indigestion by popping antacids they probably weren't giving too much thought to where our modern understanding of how the digestive system works came from. What they probably don't know is that the father of modern gastric physiology or gastroenterology, Dr. William Beaumont, achieved such status through both odd and dubious ethical means. In fact, the case of Dr. William Beaumont and his patient turned guinea pig Alexis St. Martin is perhaps one of the strangest cases in the annals of medical history.

The story begins in 1822 when Alexis St. Martin, a twenty-year-old fur trapper was attending a festive gathering of other fur trappers, known as a rendezvous, at the trading post on Mackinac Island, Michigan. One of his fellow fur trappers had imbibed a bit too much, and accidentally fired a musket, shooting St. Martin at close range. The musket ball (some say it was a load of buckshot) tore through the skin and ribs a couple of inches below the left nipple and dropped the young man to the ground. Hygiene and medical knowledge being what they were at the time the other trappers at the rendezvous assumed St. Martin would die shortly of infection or blood loss and so they carried the injured man to the nearby army post where a young physician named Dr. William Beaumont was stationed. Dr. Beaumont was asked to simply keep the young St. Martin comfortable until he succumbed to his wound.

Dr. Beaumont took St. Martin into his care, and as one did in 1822 to keep a patient comfortable, bled him with leeches and gave him an enema. But a curious thing happened as Dr. Beaumont sat waiting for Alexis St. Martin to die...he didn't.

Not only did Alexis St. Martin not die, but Dr. Beaumont observed a strange phenomena occur before his eyes, in that everything that he fed St. Martin seemed to emerge from the hole below his nipple. After two and a half weeks St. Martin began having regular bowel movements again and his eating habits returned to normal. What didn't change was that the hole in his ribs stayed open and connected directly to his stomach. St. Martin had formed a gastric fistula, where is digestive tract was now open to the outside. This strange developed awoke the mad scientist in the doctor, who realized that he, Dr. William Beaumont, could study the mechanism of digestion in the human body by tying little bits of food to a string and dipping them into the hole in Alexis St. Martin's thorax.

But how does one convince another human being that they should agree to be a guinea pig and allow carrots tied on a piece of twine, like bait on a fishing rod, to be lowered into their body? Dr. Beaumont asked St. Martin if he wanted to stay on as his manservant and do chores around the field hospital. It is possible that St. Martin was not keen on the idea of returning to the wilds of the Great North Woods with an extra hole leading directly to his stomach. What is also possible and the likely story according to historical accounts is that Dr. Beaumont convinced the barely literate St. Martin to sign a contract saying he would stay on as his servant. Whatever the case may be, Alexis St. Martin stayed with Dr. Beaumont acting as his experimental test subject for another eleven years.

By 1833 Dr. Beaumont was able to publish the first great workson digestive physiology entitled, Experiments and Observations on the Gastric Juice and the Physiology of Digestion. The doctor relocated to St. Louis, Missouri and Alexis St. Martin moved or possible fled to Quebec, Canada. Until the doctor's death, twenty years later in 1853, he tried to get Alexis St. Martin to come back to him to continue the experiments but it was to no avail. Actually, in a macabre twist, when St. Martin died, his family allowed his body to decompose before burial just to ensure that another mad scientist wouldn't try to resurrect him for further research.

A newspaper clipping found in the Las Vegas Gazette, of Las Vegas, New Mexico (a town made famous by Billy the Kid) on August 14th, 1879 reads:

Alexis St. Martin, whose open stomach furnished Dr. Beaumont an opportunity for studying directly the process of gastric digestion, is still living in St. Thomas, Canada. He is described as hale and hearty at the age of 87, though the orifice in the stomach is still open. It will be remembered that the wound was the result of a charge of buckshot accidentally received, laying open the stomach so that food could be injected and removed at will by the attending physician, whose observations were of such great value to medical science. It is now fifty-seven years since the accident occurred

St. Martin died just shy of his 88th birthday in 1880. His life and the work of Dr. Beaumont are a strange story just waiting to be turned into a screenplay. A doctor at a remote frozen outpost used the oddly healed gunshot wound of a fur trapper to investigate the mysteries of the human digestive system and a lifelong relationship and clash of personalities ensued.

Perhaps the next time you pop an antacid you will remember the tale of Alexis St. Martin and Dr. William Beaumont, who became the accidental father of gastroenterology. 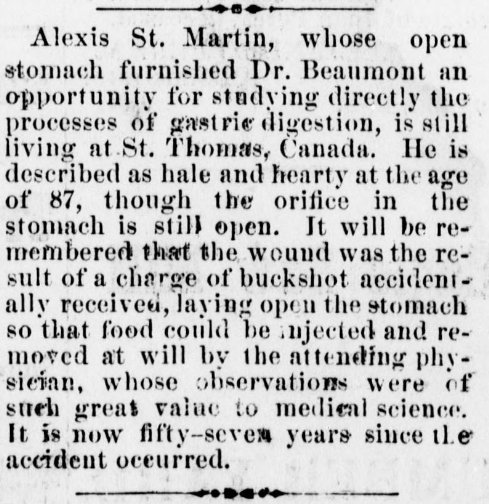