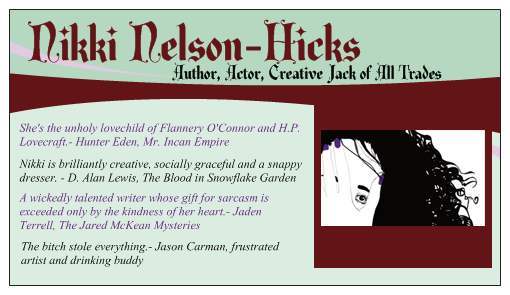 This is Part 3 of 3 featuring my extended interrogation of Nikki Nelson-Hicks. This time we pull out the brass knuckles, turn on the bright lights, and try to get Nikki to focus...

Sherlockian chronicler (Sherlock Holmes and the Shrieking Pits), creator of the Jake Istenhegyi: The Accidental Detective series, and a distracted writer with an attention deficit muse, Nikki is an acerbic, sarcastic, hair-exploding, dart throwing contrarian - all of which shines through in the maniacal humor and power of her writing. In her day job as a cubical goddess, she plays with plastic dinosaurs on her desk while thwarting customer service terrorists.

How did you write your way into the Pro Se Productions pulpverse?

Backwards. The way I've done most things. In 2004, I was one of the founding members of the Nashville Writers' Group. Through them, I met Alan Lewis. Through Alan, I met Tommy Hancock. I finally met Tommy in person and, after much vetting, he - thankfully - decided to give me a chance. 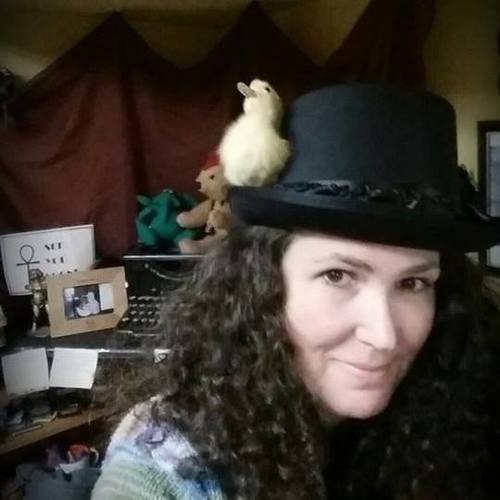 You always have a number of schemes spinning around in your head. What would be your dream project?

Once, I was on a panel and we were asked what social obligations we felt our stories owed to readers. The other writer gave a very long, pithy explanation on how he wanted his stories to bridge the gap between mainstream religions and his own faith. He had high lofty aspirations for his stories.

I was flummoxed. What the fuck did people expect from a story about monster zombie chickens? So, when it came time for me to answer, I simply said I had no agenda. I had no philosophical or political aspirations for my stories. I write fun, simple stories meant to distract you while you are sitting on the bus, in the doctor's waiting room or passing time on the toilet. That's it. I'm not a messiah. I'm a rodeo clown trying to save your ass from the raging bull of boredom.

I won't lie. I'd love to write something that would light the world on fire, start revolutions, and create a new form of thought that would shine as a beacon for the rest of humanity's existence. But I know I don't have it in me. I'm not that smart. And, frankly, it sounds like a lot of hard fucking work.

However, if a magic glowing eggplant showed up in my refrigerator and granted me one Literary Wish, I know exactly what I'd want. I have a cast of fantastic characters I created a decade ago. I've written a few short stories, and people who've read the Travis Dare stories tell me they are anxious for more. And, God knows, I've got tons of fodder and ideas. I have two banker boxes and a plastic tote box full of journals, files and notes for future ideas for stories.

I can feel the characters, pacing back and forth, getting more and more impatient while I spent time on new characters, like first borns staring at younger siblings wondering why those assholes are getting more ink than they are. I just can't find the right story for them. I'm stymied. They are a great cast, but without a play. It's frustrating as hell. That is my dream project, my great wish - If I could find the best story to plant Travis Dare and his crew so they can finally blossom and tell their stories, I'd be on the moon. 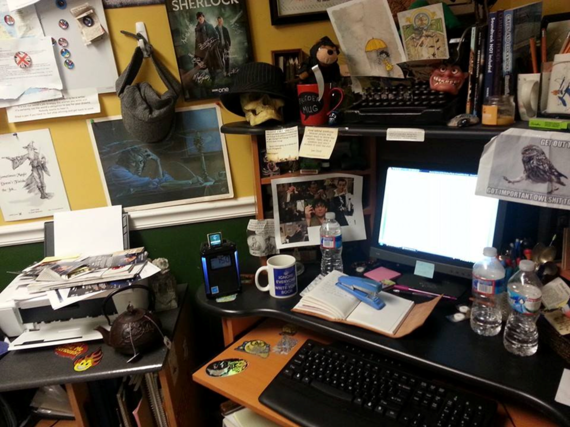 What do you look for in a book? What excites you when you read something new?

Show me something old in a new way. Make think. Make me feel. Make the words burn like drops of fire inside my brain. I want to taste them when I read them aloud. I'm an old reader - I know magic when I read it. I can feel if there is soul in the words. Don't try to lie to a liar. Don't fucking bore me. No pressure. 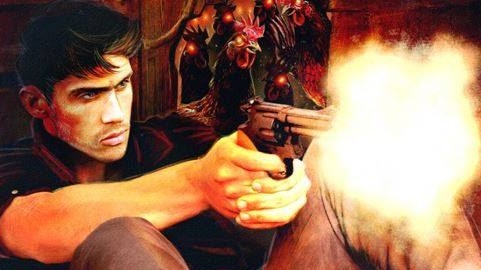 Will Jake or Sherlock be back in the Nikkiverse or is something new on the drawing board?

I have a white melamine board next to my desk. It is where I list all the projects I should be working on instead of Facebooking, watching porn, or researching stuff on YouTube.
First on the list is Jake #4. The working title is Fish Eyed Men, Fedoras and Steel Toed Pumps. (# 5 is going to be Debutantes, Dybbuks and Something, Something, Something...still working on it) #4 is going to be a short number, 15k, and I'm going to delve more into the mysterious owners of The Odyssey Shop, who they are, what they are, and what the hell are they really doing in the Back Room, Mama Effie's time in Storyville, and there's a dame causing trouble. Where there's trouble, there's always a dame.

Next is a new Sherlock Holmes story. The working title for that one is Sherlock Holmes and the English Rose. It's going to have a darker tone than Shrieking Pits. The burning question in that story is, what do you do with a murderer no one wants to believe is guilty? Holmes has blind social mores working against him as he tries to pin down a murderer and free an innocent pawn. It's going to be very tense and cool, if I play it right.

On the backburner but never far from my thoughts: I'm working on a horror anthology of my own stories called Stone Baby and Other Strange Tales. A Mycroft Holmes story, Murder in the Strangers' Room. A short Sherlock Holmes story, Not Quite a Murder. And a humour anthology called, It was funnier when I was drunker. I am hoping to publish all those under Third Crow Press, a publishing house I gave to myself as a 50th birthday gift.

Oh! And I will be writing a story for Cryptid Clash. The current working title for that is Mongolian Death Worm versus Mole Men or something like that. Fuck. I dunno. It's due in 2016. That's a long time away. I could be dead by then. But, if I'm not dead, it's going to be a cool story. The premise is an oil refinery out in the Mongolian Desert (just roll with me on this) goes radio silent. Corporate sends out a crew to find out what happened. Insert shenanigans.

As disappointing as it may be, it's time for Nikki to give me back my handcuffs and return to cubicle land, plastic dinosaur humor, and plotting her way onto the bestseller list. Thx, Nikki for hanging out, and yes, you have to give the handcuffs back - really. Hey, come back! Those things are expensive - especially with the fur covered ratchets...

Nikki can be stalked on TWITTER or FACEBOOK - where she constantly creates chaos - or you can get more insights into her unfolding neurosis on her BLOG.

ABOUT THE INTERVIEWER: Novelist, screenwriter, and television personality, Paul Bishop spent 35 years with the Los Angeles Police Department, where he was twice honored as Detective of the Year. He continues to work privately as an expert in deception and interrogation. His fifteen novels include five in his LAPD Homicide Detective Fey Croaker series. His latest novel, LIE CATCHERS, begins a new series featuring LAPD interrogators Ray Pagan and Calamity Jane Randall.
* WEBSITE * TWITTER * FACEBOOK * AMAZON *