Because, Nikki Nelson-Hicks and I had so much fun putting this interview together - Nikki's fascination with handcuffs helped - it's going to be spread over three parts. So hang with us as we take an extended trip to the Nikkiverse...

I have always enjoyed the company of people who are funny, intelligent, and a bit perverted. My favorite whack-job writer, Nikki Nelson-Hicks, is a rock star in all three of those demographics. Described as the unholy lovechild of Flannery O'Connor and H.P. Lovecraft, she claims be burdened with the reputation as a damn good shag - although you would have to ask her husband, Brain Hicks, for verification.

Sherlockian chronicler (Sherlock Holmes and the Shrieking Pits), creator of the Jake Istenhegyi: The Accidental Detective series, and a distracted writer with an attention deficit muse, Nikki is an acerbic, sarcastic, hair-exploding, dart throwing contrarian - all of which shines through in the maniacal humor and power of her writing. In her day job as a cubical goddess, she plays with plastic dinosaurs on her desk while thwarting customer service terrorists. She is the mother to Girl and Boy, both of whom seem to have inherited her love for the bizarre and stinging one-liners.

I'm not sure how serious she is about her recently announced scheme to create a Writers I'd Like To F@ck Calendar, but I do know she's been overwhelmed with authors volunteering to pose, and inundated with photos of man-bits since announcing the venture. She can be stalked on TWITTER or FACEBOOK - where she constantly creates chaos - or you can get more insights into her unfolding neurosis on her BLOG.

With Nikki a little overexcited to be in handcuffs and kicking back in the interrogation room, it's time to cue the bright lights, cue the sound effects of a sap hitting flesh - and action!

When did you first discover Sherlock Holmes and the legacy of H. P Lovecraft's Cthulhu mythos? How have those inspirations influenced your writing?

I read my first Sherlock Holmes story for a high school book report. I picked it because I thought the Hound of the Baskervilles was a ghost story. I was very disappointed there wasn't a killer ghost dog wandering the Moors. Hell, there wasn't much Sherlock Holmes in it, really. I don't think I even finished reading the stupid thing. When my turn came to give my oral report, I did a quick shuffle dance and faked it. I learned very early on if you make people laugh, they don't listen too deeply to what you are saying. I earned a lot of A's in high school using this tactic. 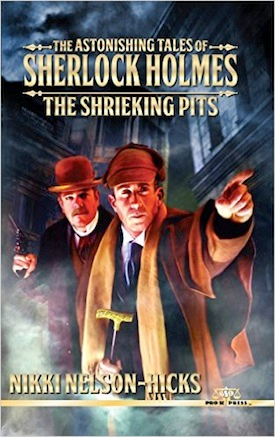 It wasn't until the '80s when I discovered Jeremy Brett's The Adventures of Sherlock Holmes, that I truly became infatuated with the character. How can you not love Brett's Holmes? He's just so cool and badass. He doesn't need a gun; he cuts people down with just an arch of an eyebrow. There was something about his portrayal of Holmes that appealed to me.

I later learned Brett suffered from bipolar disorder. He used his experience with the disease and blended that pathos into his characterization of Holmes, to examine his highs and lows. Something about that rang so very true to me. I'm a depressive and I understand how hard it is some days just to keep the Smiling Mask on straight. For me, his Holmes typified the struggle of the Creative mind to keep churning in a world that is so determined to make one mundane. I think Sherlock Holmes would agree even if my wording is a touch romantic.

Why do I love Sherlock Holmes? To put it in plainer words, I love Sherlock Holmes because he is an eternal nine year old, full of curiosity and wonder, looking for adventure and are frustrated people don't see all the fascinating things all around us. It appeals to my own eternal nine year old, that nut brown little girl who spent her summers playing in creeks, wearing bed sheets for a cape, climbing trees, investigating abandoned graveyards and stealing horses - Actually, it was only one horse. My mother came back from a beer run to find a horse tied up in the garage. After informing me that, "Goddammit, Nikki, they hang horse thieves!" I took it back to the field I found it in - I work hard to keep that girl alive.

As for Lovecraft, well, that goes back to my years of playing Call of Cthulhu with my RPG friends. That is where I was introduced to the stories of Lovecraft.

To be frank, I'm not so much a fan of his stories (ugh, the writing is so old fashioned and...ugh...long winded) as I am of the ideas behind his stories. Lovecraft blended the philosophies of Existentialism, Nihilism and Absurdism into a big, gooey ball of tentacular madness. It's horror for the thinking nerd.

How have those two very different styles influenced me as a writer? Sherlock: Plotting, keeping track of the knots in the rope so the story makes sense in the end. Lovecraft: The rope is stretched across a yawning void that wants nothing more than to suck you inside. What pushed you to go beyond being a cubical goddess and into the unreliable world of writing?

I've always wanted to be a Writer (capital W intended). Unfortunately, I labored under the idea being a Writer was some kind of magical calling. I believed I needed to complete a series of tasks, educational and spiritual, in order to appease the Literary Gods and get granted the title of Writer.

I wasted so much goddamn time. I have a 30 year list of shit jobs where I've sat in small back rooms, watching the clock. Jobs where being called a bitch was a normal thing. Jobs where the boss' cokehead son would regularly trash the office. Jobs where I had to use the toilet at the McDonald's down the street. Jobs where coming back after lunch and finding my boss passed out on my desk was a normal Friday. Jobs where I had coworkers I only knew by tag names: The Doctor (not the Timelord - this one sold drugs out of the warehouse), Big Bird, and Toad. I have spent the majority of my life in dead end, mind raping, mana sucking jobs waiting for the Time to be Right - Except once when I was the assistant to the Governor's legal counsel. In that job, I got to research murders, flip my dainty fingers through death penalty execution files and deal with stupid, stupid criminals. It. Was. Awesome. What is better than having a boss say, "Hey, Nik. Pull out the King's Lane Murder file, read it and tell me what you think." HEAVEN. It only lasted six weeks but...HEAVEN. So much fodder. So much tragedy.

Then, I got this gig. It's just like the other gigs. I sit in a beige cube farm where the hierarchy is determined by the height of your stall wall. But this time I came in with a different mindset. "Okay, girl, here's the deal. You're 40 years old now and you've landed yourself into another stupid shit job. So, here's the fucking deal: you can sit there, whining and bitching and falling deeper into the what if death spiral OR you can got off your ever flattening bony ass and get some fucking work done!

My inner voice sounds like a cleaned up, female, R. Lee Ermey.

And that's what I've done. I've had this incredibly stupid job for ten years. Seriously, I don't know what the fuck I'm supposed to be doing here. I could be replaced with a wire basket. Yet, in that time, I've written novels, short stories and started the Jake Istenhegyi series.

In my spare time I like to torture my coworkers by telling them their Fitbit bands are actually sending data to the Reptilian Alien Overlords who have bases on the moon so they know who will be fit to eat first when they reclaim the Earth. It amuses me.

Next up, Part 2 of our trip through the Nikkiverse as the felony charges mount...

ABOUT THE INTERVIEWER: Novelist, screenwriter, and television personality, Paul Bishop spent 35 years with the Los Angeles Police Department, where he was twice honored as Detective of the Year. He continues to work privately as an expert in deception and interrogation. His fifteen novels include five in his LAPD Homicide Detective Fey Croaker series. His latest novel, LIE CATCHERS, begins a new series featuring LAPD interrogators Ray Pagan and Calamity Jane Randall.
WEBSITE TWITTER FACEBOOK AMAZON