Exactly five weeks before my 45th birthday, I did something for the first time.

I ran an entire mile -- four straight laps around a track without stopping.

While it's possible that I was forced to go that far in a P.E. class, it's just as possible that I didn't make it. Or that I fibbed about how many laps I'd done and coaches let it slide, knowing how long another loop would've taken.

I avoided running as an adult, too. If nobody's chasing you, why bother?

The next week, I ran eight miles -- per day -- on Monday, Wednesday and Friday. At the end of the following week, I signed up for the Dallas Racing Club's Half Marathon. 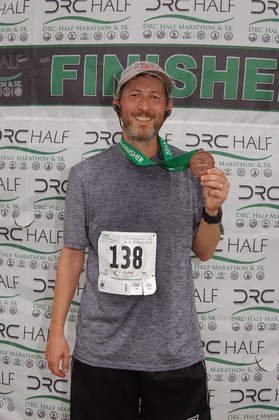 This was no beginner's luck, nor was it unleashing some untapped potential. I see it as the capstone of the latest phase in my journey from fatness to fitness.

In less than two years, I've dropped 52 pounds. I've plunged from size 38 pants to 30s, from favoring XXL T-shirts to mediums. And I ran a freakin' half-marathon.

My story is not unique. Lots of people lose 50-plus pounds and lots go from non-runner to half-marathoner. Surely plenty do both.

Still, my story is uniquely mine, from a ridiculous start of walking in place on a mini-trampoline to the unforgettable burst of adrenaline and emotion going across the finish line.

This is that story.

In April 2012, about five months into working for the American Heart Association, my office held its annual Health Fair. 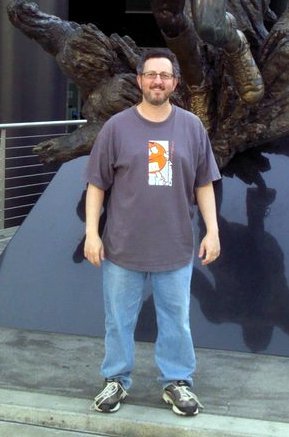 I hit every booth, hearing sales pitches for everything from personal trainers (to get you healthy) to estate planners (in case you didn't). I also learned my various numbers.

By November, I'd gained it back and more. I don't know specifics, just that my easy-fit 38s were tight.

I decided enough was enough. I also decided that since it took 43 years to get this big, I would go slow and steady in the other direction.

Fitness trackers were becoming all the rage, so I bought a Fitbit Force. The name was perfect. Seeing the dang thing on my wrist forced me to get moving.

That's when I dusted off a relic from a previous failed attempt at fitness, my small, non-bouncy trampoline.

Walking in place on the "rebounder" felt as silly as it seems. At least, until my Fitbit buzzed in honor of my 10,000th step.

As the weather improved, so did my routine. I walked my dog or took longer walks at a nearby track.

To emphasize my new approach, I spent Thanksgiving morning doing the Turkey Trot in downtown Dallas. Not the 5k route, the 8-miler. Walking, of course. 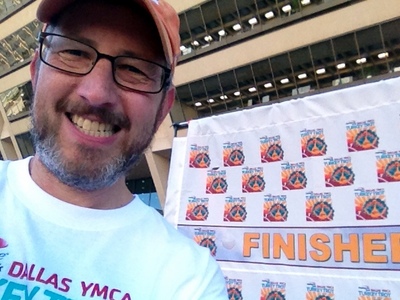 In May, my weight had plateaued in the mid-150s. To shake things up, I decided to hit the track early every morning to beat the heat and get in a long walk.

Since the Turkey Trot was eight miles, that became my daily goal.

A few weeks in, just for the heck of it, I tried running a lap.

Soon, I was running a lap per mile.

A lap per mile over eight miles is eight laps -- or, two miles. But they were so spread out, it never felt like it.

I went to donate blood one afternoon in August and the guy who took my vitals said, "Are you a runner?"

It felt like being accused of a crime. I stammered, "Uh... why do you ask?"

His question resonated for weeks. Around that time, I saw two friends who'd each lost so much weight that when I asked how they did it, I feared they'd say, "Chemo."

These two people didn't know each other, but each had followed the same, simple plan: Eating the right amounts of the right foods.

I could do that.

Soon I was running more and eating better. I was even walking to Trader Joe's a couple of times a week for veggies.

Leaving the store one night, I bumped into a neighbor I hadn't seen at the track in a while. He said he mainly runs when training for an event, like a half-marathon.

That was Thursday, Sept. 24. And I'd yet to run an entire mile at once.

I tried it the following Monday. Things took off from there, so much that by the end of the following week I Googled "half marathon Dallas."

There were lots of choices, including one that seemed perfect: the day before my birthday with the same start/finish as the March of Dimes walks my family's done for more than a decade.

What about my lack of formal training? More Googling uncovered that my aimless approach amazingly put me way ahead of schedule.

Next came the realization that my low-calorie diet had to go on hold. First, I wanted another weigh-in.

I celebrated with new jeans: size 30s for the first time since college, maybe high school.

Just before the race began, a dip in confidence sent me out with folks aiming to finish in 2:25.

After a mile, I worked my way near the woman holding the 2:20 sign. After five miles, I left her behind.

The first mile proved to be my slowest mile, the 13th my fastest. The final 0.1 was pure bliss.

I finished 907th out of 1,512 -- much closer to the middle than the end. Finishing was my only goal. Still, all those numbers beat my most optimistic expectations.

To which my 17-year-old replied, "I expected you to pass out and die." 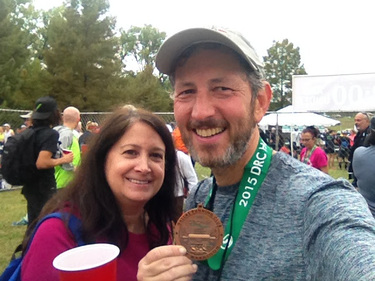 On Thanksgiving, I'll again do the Turkey Trot -- running all eight miles. I'm not sure what'll come next, but I like knowing there will be a next.

I often tell my kids that I regret never developing a workout habit in my youth. Truth is, I shunned it. But it finally clicked and that's what matters.

While I don't recommend doing things my way, there is one aspect I consider universal.

Motivation. You're not going to accomplish anything until you decide it matters.

We all try various things and if they don't pan out we get frustrated. Odds are, your head was in it but not your heart or vice versa. That's why all my previous attempts to get in shape failed.

Once I was truly committed, one step led to another. And another.

All the way to a half-marathon finish line.

Postscript: Since a longer version of this post appeared on JaimeAron.com, I'm proud to say one friend was inspired to sign up for mountain bike races and another committed to start running. How about you?

Father, husband, writer. Check out my work at JaimeAron.com, and my favorite story at JakeandJosh.net.