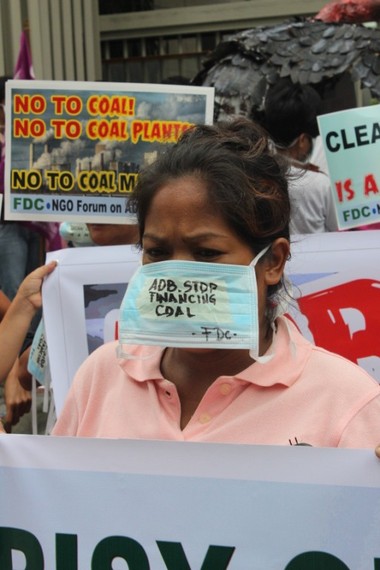 Lurking beneath the Asian Development Bank (ADB)'s clean energy exterior is a dirty secret: Despite their promises to bring clean energy in the Asia-Pacific region, ADB continues to be a supporter of dirty coal projects overseas.

This week, the ADB is hosting the Asia Clean Energy Forum at its headquarters in the Philippines. While the Bank is sure to talk about its investments in clean energy in the Asia-Pacific region, they will, unsurprisingly, fail to mention that while the rest of the multilateral community actively moves away from coal finance, they continue full steam ahead.

Between 1994 and 2012, the ADB was the third largest public international financier of coal-fired power plants, investing $3.9 billion in 21 projects. Over the past six years, the institution invested $1.69 billion in five coal plants, including $900 million in the Jamshoro power plant in Pakistan, $450 million in the controversial 4,000-megawatt Tata Mundra Ultra Mega Coal plant in the Indian state of Gujarat (a project even the IFC has said it won't help expand), and $120 million in the equally controversial 200-megawatt coal plant in Naga City, Philippines.

To fully understand the current state of the ADB's support for coal, take the case of the Jamshoro power plant.

Just last year, over the objections of key stakeholders in the ADB, the Bank's board voted to support the 600-megawatt Jamshoro coal project, despite the conflict with the Bank's own environmental policy and without a comprehensive analysis into clean energy options to meet Pakistan's energy needs. The environmental policy alone requires that for projects with high greenhouse gas emissions (like that of a coal-burning power plant), the borrower must evaluate "technically and financially feasible and cost-effective options to reduce or offset project-related greenhouse gas emissions during project design and operation, and pursue appropriate options."

But that didn't happen.

All of this is coming just months after the World Bank sent an unequivocal signal to other multilateral organizations that the time for financing new coal plants is over.

That's why a coalition of 71 civil society groups from 19 countries, including many from Asia, released a statement this week calling on the ADB to get in line with its peers and stop funding dirty coal. Over the past year, the World Bank, the European Investment Bank, and the European Bank for Reconstruction and Development have all introduced policies restricting funding for coal projects. Several governments have done the same. Yet the ADB remains conspicuously silent.

This should be an easy call for ADB to make. The Bank has significantly stepped up its investments in clean energy and energy efficiency over the past six years to comply with its own commitment to funding $2 billion per year in clean energy. ADB claims that it exceeded this target in 2013, with "clean energy" investments of over $2.3 billion, which includes some cutting edge investments in off-grid clean energy to industry leaders like Simpa.

While the increased support for clean energy sources and energy efficiency is admirable, we unfortunately can't rely on what they consider 'clean.' But, we in the non-governmental organization world know: "clean coal is a dirty lie."

Apparently the ADB disagrees. In 2013, it counted $109 million from the Jamshoro coal project as a "clean energy" investment for "supply side efficiency" improvements. In 2008, 20 percent of the $450 million loan to the controversial and massively polluting 4,000-megawatt Tata Mundra Ultra Mega Power Project in India was also counted as "clean energy." Many other coal, natural gas, and destructive big hydropower projects have also been counted towards the Bank's clean energy targets.

It's time the ADB realize that the world's dirtiest fuel can never be considered clean. By continuing to invest in coal with public funds, institutions like ADB are putting not only our climate and planet at risk but are also jeopardizing the health of millions of people around the world. If the Bank is serious about being a clean energy institution, it must get rid of its dirty little coal secret.

It's time for ADB to align itself with the international community and end support for new coal projects.