By David Brown | Off the Shelf

Computer passwords have gotten so complicated. Gone are the days that "abc123" would suffice. Now they want you to have a minimum number of characters, but some have to be capitalized and some have to be lowercase. Even punctuation marks and spaces are allowed. For much of last year, my password for my office computer was "May 27, 2014" for a simple reason: that was the date I Am Pilgrim by Terry Hayes would finally be published. 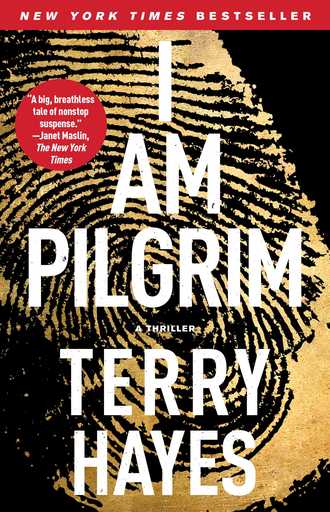 I am the deputy director of publicity at Atria and Emily Bestler Books, the imprint of Simon & Schuster that published I Am Pilgrim. Because part of my job is to build buzz for the books that I am assigned, I have to read the books many months in advance of publication.

Ordinarily, that is a great benefit of my position. This time it was cruel and unusual punishment.

I devoured it--all the while getting immersed in the world that Hayes created, almost bathing in the adrenaline and lathering myself with its complexity. And then all I wanted to do was discuss it, but alas, I had to wait until May 27, 2014, when everyone else could experience it, too.

The plot, while so vast and so intricate, is best enjoyed if you go into it knowing as little about it as possible--trust me on that. But seeing as we've just met, perhaps trust doesn't come that easy, so I'll give you the most I feel comfortable sharing.

Our hero, Scott Murdoch (aka "Pilgrim," aka "Rider of the Blue," aka "Jude Garret"--you get the idea) is a burnt-out, retired American super-spy who is drawn out of his self-imposed hiding by a NYPD homicide detective investigating the gruesome murder of a woman in a fleabag hotel. We slowly find out more about Pilgrim, why he is of use in this investigation, and how it eventually leads him on an international manhunt for a brilliant lone-wolf terrorist nicknamed "the Saracen."

Believe it or not, this is Terry Hayes' debut novel, though he does have a rather lengthy and impressive writing resume. He's well known to film buffs as the screenwriter for such blockbusters as Mad Max 2: The Road Warrior, Dead Calm, Mad Max Beyond Thunderdome, Payback, and Vertical Limit. He was first discovered by fellow Australian George Miller, who hired Hayes to write the novelization of his script of 1979's Mad Max.

For me, I Am Pilgrim was a game changer. It raised the bar for international spy thrillers and became the benchmark for all future reads. It's rich in detail and character, full of heart-racing action, and terrifying in its plausibility. It has heart and has you questioning your own beliefs.

I haven't used a book's on-sale date as my computer password since then, though I look forward to the next time I'm that excited for a release. And a note to hackers: if you notice me getting giddy with excitement and muttering about something being the "greatest thing I've ever read," find out when it's coming out and empty my bank account.

David Brown is the Deputy Director of Publicity at Atria Books.