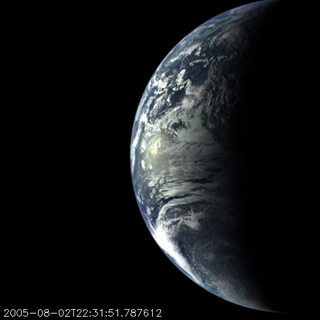 Photo caption: Earth as seen by the MESSENGER spacecraft as it flew by our planet on August 2 2005.

Don't let your seemingly vast experience as an inhabitant of this world fool you. It's easy to be lulled into a false sense of self-importance. Let me explain.

You likely live in a house or apartment on a street, and in a community that's part of some town, maybe even some major urban area. Your community is likely part of a much larger state or province of one of the nations of Earth--which are themselves nothing more than imaginary constructs of human society. Your country is also likely assigned to one of the continental masses whose sum total of land area is just 29% of the planet's surface. You are small and the Earth is seemingly vast, as if we humans to Earth are just so many micro-organisms scurrying about each day (each rotation of Earth), and following rules of social engagement that often defy logic.

It's a story that at a most fundamental level defines your address. It may be all the address you need to ship a package to your friend across the ocean. But it won't cut it with the intergalactic post office. As I said, don't let your experience and perception fool you. It's the rest of the address of which most Earthlings are unaware. For so many reasons it's also the most important part of the address.

Our seemingly vast Earth is but a tiny planet. (By comparison, over 1,000 Earths fit inside Jupiter.) Earth is one of eight planets orbiting the Sun--a tiny star by star standards--as part of a planetary System called the Solar System. The Sun resides in the Solar Neighborhood of stars, a small smattering of stars found in the Orion Spur--a nondescript little corner of the Milky Way galaxy. The Milky Way is a vast city of stars, with enough stars to give 50 to every human on Earth. Right now, you, your family, and the rest of your race are orbiting just one of those stars.

The Milky Way is one of two large galaxies in the Local Group of 25-30 galaxies. The other large one, Andromeda, is on a collision course with ours. And the cosmic debris-field that is the Local Group of galaxies resides not too far cosmically speaking from the Virgo Cluster of 1,300 to 2,000 galaxies. The Local Group and Virgo Cluster are just two of the 100 to 200 or so groups and clusters of galaxies making up the Local Supercluster of more than 50,000 galaxies. The Local Supercluster--a small supercluster--is one of millions of superclusters that are woven together to form the largest structures ever seen--Galactic Filaments. And all this comprises the Observable Universe--what we believe is a remarkably insignificant portion of the Universe that nature, by law, allows us to see. Beyond what is observable, the Universe may truly be infinite.

So using myself to summarize--

I live in a house on a street in a town in the State of Maryland, just outside of Washington, DC, in the USA, in North America, on Earth, in the Solar System, in the Solar Neighborhood, in the Orion Spur of the Milky Way Galaxy, in the Local Group of Galaxies, near the Virgo Cluster of galaxies, in the Local Supercluster of galaxies in the tiny corner of the Universe we like to call the Observable Universe.

That is our address. It makes the often human perception of our reality as the center of cosmic activity ... just laughable. You always know the most about your own neighborhood. But that also leads you to conclude your neighborhood is somehow important. In truth, it is only important because you live there. And you obviously think you are important. So please think about this ... for vast numbers of humans, our perception, our daily life, is driven by self-importance, a remarkable lack of humility, ignorance of--even disinterest in--a greater context of existence which our machines of exploration have brought into crisp focus, and for many, a sense that embracing God is the righteous and comforting thing to do--but does not require taking time to look at the majesty beyond Earth. And while we burn precious, non-renewable calories watching "reality" television, following the lives of the rich and famous, acquiring lots of things, deciding which of us is better or more deserving or more moral, and buying into the distorted views of what our societies have our children embrace as heroes and role models, our world--the spaceship that affords us the view of majesty--is coming under attack.

The microbes called human kill one another because each group, each (bacterial) culture, thinks they are more important than the other. It is self-importance taken to the extreme. Their self-serving technology is modifying the environment of the planet, not only threatening their existence for generations to come (how do they do that to their children?), but puts at grave risk countless species that don't have the gift of recognizing the majesty of the cosmos. Isn't it ironic that the only species on Earth that does possess the gifts of intelligence and tool-making, does not collectively care about its world, and collectively squanders these gifts?

So watch the movie that goes with the image above, taken by the MESSENGER spacecraft as it flew by in 2005. Watch as the Earth recedes into the cold, black void of space. Imagine the nearly 7 billion humans scurrying around on its surface. How many of them recognize that the remarkable spaceship they are on is not owned by them? It never was. But because of their technology, they are now, by natural decree, stewards of this spaceship for good or ill. Do they understand their responsibilities to the spaceship, to all its occupants, and to themselves? For if this tiny blue world is laid to waste, the geologic Age of Self-Importance will be over, the rest of the Universe will surely not care ... and I fear God will not come to the rescue.