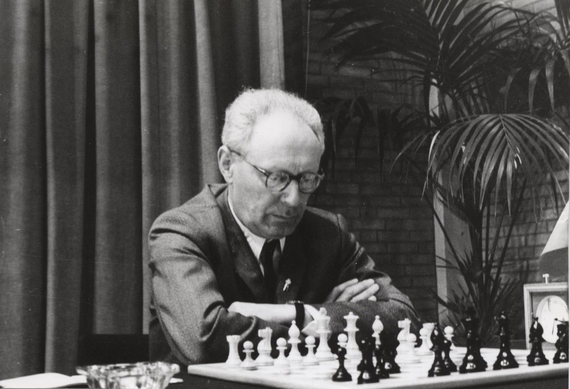 Botvinnik during his last tournament, Leiden 1970

Chess players around him had disappeared, having been executed or sent to gulags, but he lived. Mikhail Botvinnik (1911-1995) survived because he made himself indispensable. Even the architect of Soviet chess, Nikolai Krylenko, became a victim of Stalin's purges in the late 1930s having been accused of spending too much time climbing mountains and playing chess. His goal was to export chess as part of Soviet culture and to dominate the chess world. He did not live to see it happen. Botvinnik was the most important chess player of Krylenko's legacy.

In his new book Mikhail Botvinnik, The Life and Games of a World Chess Champion, published by McFarland, Andrew Soltis writes:

"[Botvinnik] was born under a monarchy, lived through a revolution, a civil war, the brutal collectivization and famine, the Terror, a second world war and a cold war, the end of Stalin and a "thaw", the malaise of the 1960s and 1970s, the Gorbachev reforms of glasnost and perestroika and, at the age of 80, the end of the Soviet Union and the beginning of an uncertain new Russia that is still trying to define itself."

Soltis tells a fascinating story of a man who seemed cold, unapproachable, and rather boring. Botvinnik was a devoted and convinced communist with ties to highest Soviet officials, including Stalin. He was the world champion for a span of 15 years and the leading Soviet player for more than 30 years. Generations of talented players, such as the world champions Anatoly Karpov, Garry Kasparov and Vladimir Kramnik, learned from him how to play the game.

Botvinnik proposed playing rules to FIDE and defined the Soviet School of Chess. Its influence is still seen today: six of the eight participants in the Candidates tournament to establish the challenger to the world champion Magnus Carlsen, underway in Khanty-Mansiysk, Russia, were born in the Soviet Union. In his youth, Vishy Anand visited the Tal Chess Club at the Soviet Cultural Center in Chennai, India. And Veselin Topalov, no doubt, studied Soviet sources.

But not everything was rosy in Moscow. Boris Spassky once compared the lives of Soviet grandmasters to the lives of spiders in a bottle.

Soltis says his book is an attempt to explain Botvinnik in the context of today. It is a brilliant account, the best book written on Botvinnik by far. Soltis did extensive research, using mainly Soviet sources. Both Botvinnik's friends and critics have a voice in the book.

The games are an important part of the book and Soltis uses mostly Botvinnik's notes. I have included some of them in my commentaries. Botvinnik's game against the Austrian attacker and the author of the classic The Art of Sacrifice in Chess Rudolf Spielmann, played in the first round of the 1935 Moscow tournament, is his most celebrated miniature victory, lasting only 12 moves. 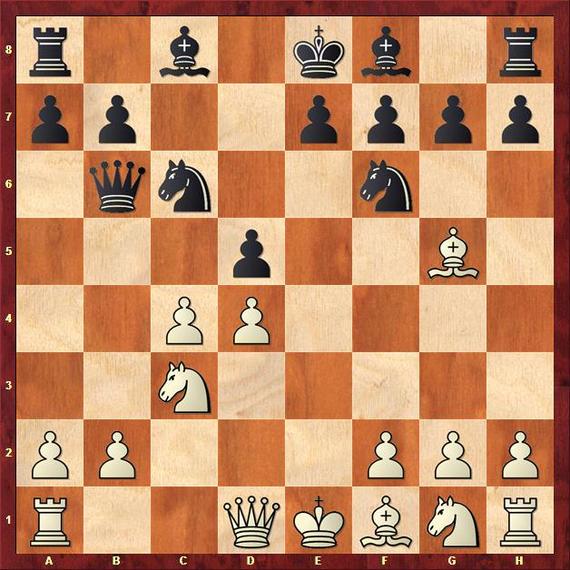 This aggressive move was recommended by the Czech master Karel Opocensky in his chess column in Narodni politika after the 1933 match Botvinnik-Flohr and it was used for the first time by Josef Rejfir against Spielmann in Maribor 1934.
"Surprising and good," wrote Rejfir in Ceskoslovensky Sach 8-9/1934 about Opocensky's invention. The Wiener Schachzeitung called it the Prague variation.

Losing outright. Taking the d-pawn with the knight 7...Nxd4 was considered the only alternative. 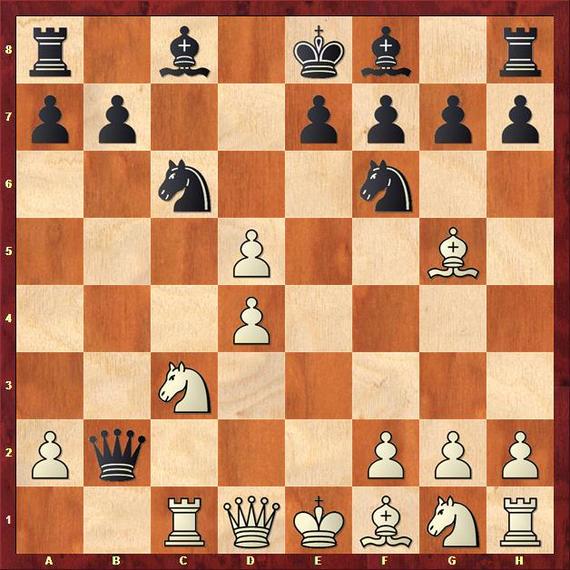 There was a controversy in this tournament concerning the game Botvinnik needed to win to share first place with with Salo Flohr of Czechoslovakia. Soviet master Nikolai Ryumin, known for creating brilliant attacks, allegedly composed the 22-move mating combination for the game Botvinnik - Chekhover. These things are difficult to prove but Soltis shows that Botvinnik never really denied it outright. It remained a mystery as did his 4-1 score against the Estonian hero Paul Keres in the 1948 World championship tournament.

Soltis does not overburden the reader with long variations. His notes are guiding the games gracefully. Here and there he could have revealed more. For example, he does not mention a major discovery by the late Richard Cantwell, an American dentist and a strong chess amateur, who found a more precise continuation in Botvinnik's most famous encounter. 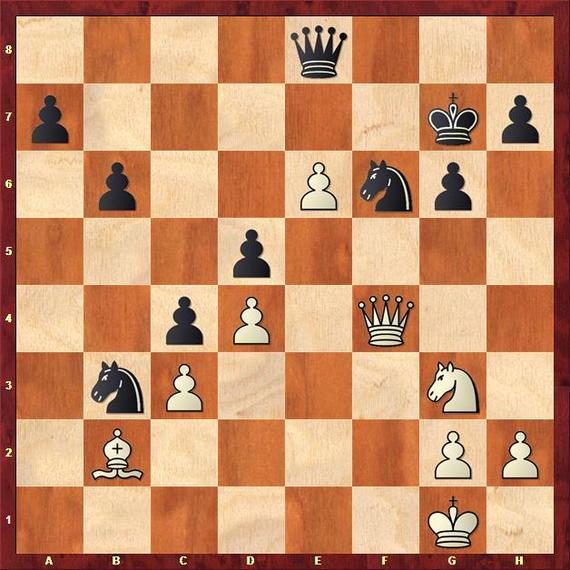 But after 29...h6, instead of 30.Ba3, Cantwell found that 30.Qd6! dominating the black queen, gives white excellent winning chances, for example

A wonderful deflection. The English grandmaster John Nunn calls it one of the most famous combinations of all time. During the 1954 chess olympiad in Amsterdam the celebrated position made it on an enormous cake displayed in the window of a local bakery. Botvinnik tells a story how the Russian computer "Pioneer" analyzed this position in 1979. To Botvinnik's disappointment it first suggested 30.Nf5, but later it found 30.Ba3!!

Before Botvinnik could play this move, one of the spectators in Rotterdam shouted it out loud. The knight sacrifice is the key to Botvinnik's combination allowing the white queen to help promote the e-pawn.

Botvinnik and other world champions

From the eight world champions I played in my career, I drew all games against Botvinnik, Tigran Petrosian and Bobby Fischer. I was undefeated against Vassily Smyslov, beating him twice. I lost one game to Mikhail Tal and Garry Kasparov.
I won once against Anatoly Karpov, but lost four times with plenty of draws. My worst score was against Boris Spassky: in 21 games I lost six times and won twice. 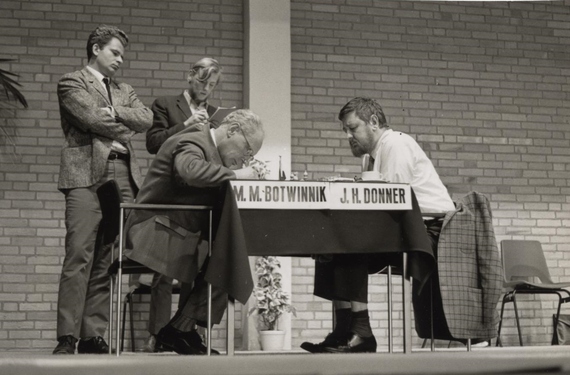 Some of the draws against the world champions were dramatic and had a powerful theoretical impact. For example, my game with Fischer "determined for a long time the main trend in one of the sharpest lines of the Najdorf Variation in the Sicilian defense," according to Kasparov.

Still, it puzzled me why my drawn game against the Soviet patriarch was included in his collection "Botvinnik's Best Games 1947-1970." At the 1972 Chess Olympiad in Skopje, I was able to find out. I was playing the first board on the U.S. team, Botvinnik was there as an honorary guest.

"The game showed that my calculating power was not what it used to be," was his answer, and he added unexpectedly: "My playing strength was declining." Botvinnik always thought about his chess objectively.

The see-saw battle was described in the daily tournament bulletin as chaotic after it took a sharp turn around move 15. The spectators and journalists were united in preferring the side of the former world champion, but they got lost in calculations. For every suggested win, there was some defense or escape. The Belgian GM Alberic O'Kelly found only one clear-cut win after analyzing it for two weeks. Suddenly, I threw my heavy pieces toward Botvinnik's king, leaving my monarch unprotected. The game had become tense and slippery. On move 37 Botvinnik had a choice of three moves: one would lose, one would win, and he picked up the drawing alternative. The tournament bulletin gave this advice: Highly recommended for further study! "Botvinnik missed an opportunity to win what would have been one of his finest games," Soltis concluded.

Designed to extinguish any spark of counterplay, this Ben-Oni variation also makes it difficult for black to develop. His light pieces may trip over each other, lacking space. It is a safe choice, avoiding complications after 9.cxd5 b5, but I thought it had a drawback. 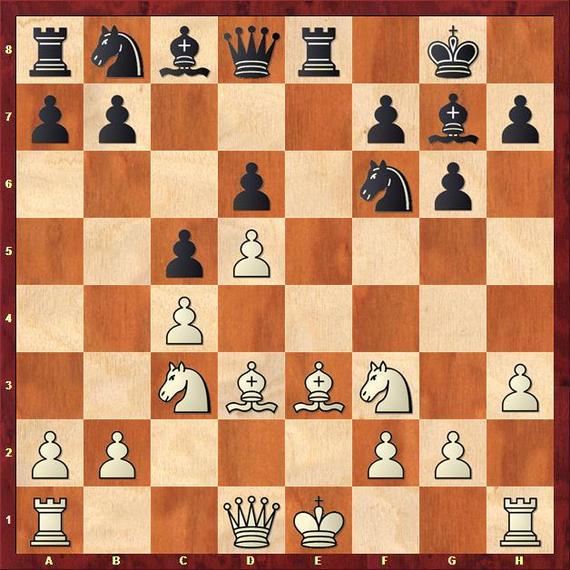 Botvinnik's key move, not being afraid to go into the pin and sacrifice a pawn. I knew he played it against Milan Matulovic at Palma de Mallorca in 1967, but I thought I could challenge it successfully with my next move. I didn't know how thoroughly he had analyzed it. After 45 years there is no final verdict on Botvinnik's idea.

Exchanging the dark bishops can help black to close the e-file, get some play on the dark squares and avoid massive exchanges of the heavy pieces. It is not easy to coordinate this strategy since white can shift the pressure to the f-file.

Fifteen years after this game, the exchange sacrifice 10...Rxe3+!? appeared, stressing that the dark bishop could be more effective than the rook, dominating the dark diagonals and lurking in white's camp. It was refined last year by the Moscow wizard Alexander Morozevich this way: 11.fxe3 Qe7 12.e4 Nbd7 13.0-0 Nh5, with the idea 14...Nd7-e5.

Accepting the e-pawn 12...Rxe3 is a suicide. After 13.Qd2 all white pieces are ready to pounce while black's queenside is still in deep freeze.

Preventing any future knight leap to the square b5.

I thought the pawn sacrifice gave me good play on the dark squares. It was the only way to establish the square e5 for the knight, but it was a gamble. It was also messy and I liked that. But I miscalculated.

"A serious mistake," said Botvinnik. "Black follows through logically with his plan, but gets a lost position. He had to play 15...Rf8 16.Raf1 Ne8 followed by f7-f6 with a solid, but passive position."

Perhaps, but Botvinik was very good when he had you on your knees. He knew how to increase pressure and improve his position.

It was not very pleasant to see Botvinnik's rook on the square f7. After all, Rxf7 was his coup de grâce in his brilliant victory against Lajos Portisch in Monte Carlo in 1968. 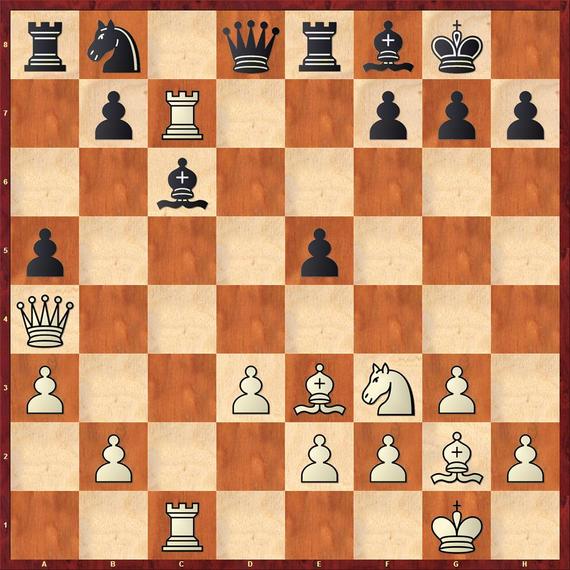 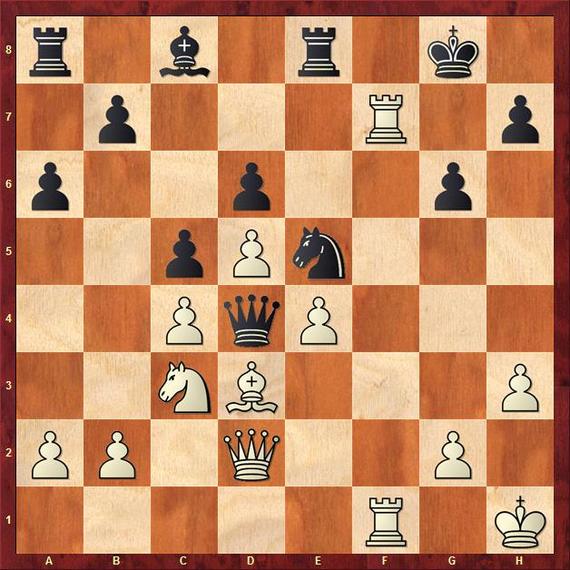 My queen and knight are ideally placed. But I realized I was forcing Botvinnik to make good moves without giving him any choice to go wrong.

Threatening to finish black with 21.Rf8+. 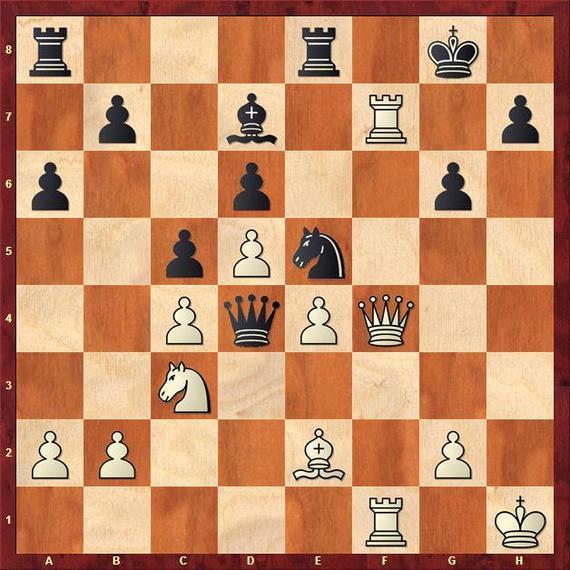 The famous Soviet move-repetition, no matter how practical it may be, it always spoils beautiful games. 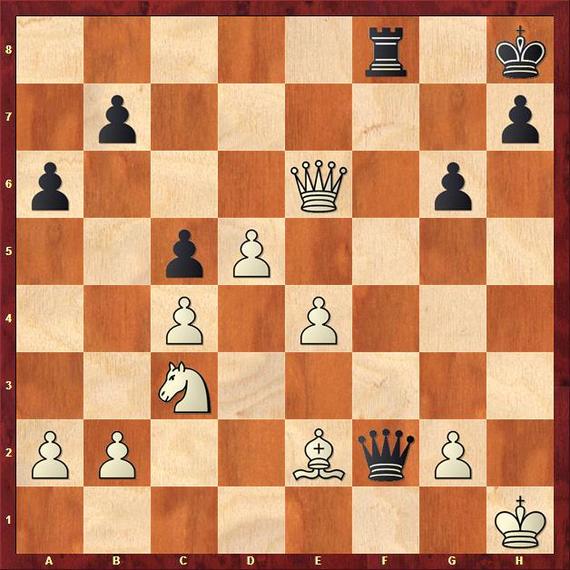 It not only brings the d-pawn closer to promotion, but it also opens the square d5 for the knight or the queen, whichever piece is needed there.

Threatening 26...Rh1 mate. Botvinnik didn't believe I could send the rook down, leaving my king unprotected. 'The black king astonishingly slips out of the ambush,' he said. 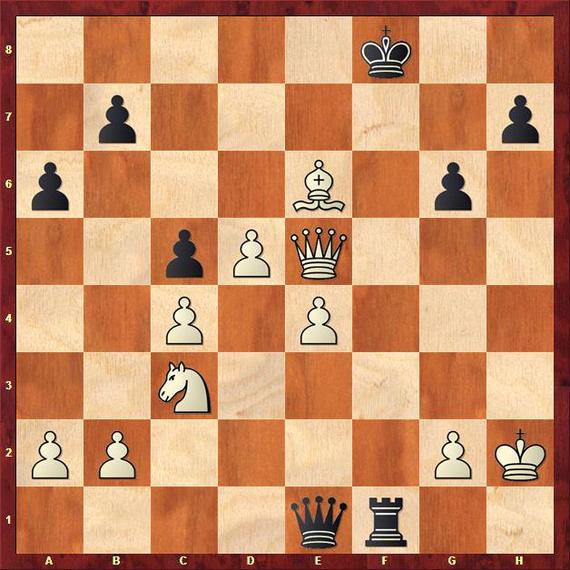 All three results were possible at this point. To win the game, Botvinnik had to march up with his king - a very dangerous proposition in time trouble, not being able to fully calculate the consequences. He plays it safe and checks, and that leads only to a draw. With a different check, he could even lose.

Botvinnik's final mistake, but it is hard to blame him. He didn't have much time to think. And he could have made a fatal error. When the game finished Pal Benko pointed out that after 37.Qd6+? Kg7 38.Qe7+ Kh8 white has to give a perpetual check. Benko dismissed 38...Kh6! because he thought that 39.Kh3 should win, overlooking 39...g5 and black wins.
The queen checks don't do the job: 37.Qh8+ only draws and 37.Qd6+ even loses. What else is there?

Astonishingly, a quiet king-move 37.Kh3! is the only winning try, but difficult to make when you are running out of time. It is not for the faint of heart. Botvinnik didn't even considered it in his analysis afterwards. The white king walks into a carousel of checks, but escapes the danger and white should win.

Botvinnik was supposed to play Bobby Fischer in Leiden in 1970 and prepared for that match with Spassky. But the match collapsed and the Dutch organizers changed it to a four-player tournament. It was Botvinnik's last.