This is Part Two of a three-part overview of the CDC's Adverse Childhood Experience Study -- the ACE Study. "Adverse childhood experiences" has become a buzzword in social services, public health, education, juvenile justice, mental health, pediatrics, criminal justice, medical research and even business. Many people say that just as you should know your cholesterol score, so you should know your ACE score. But what is the ACE Study? And do you know your own ACE score?

So, if you were Dr. Vincent Felitti, chief of Kaiser Permanente's revolutionary Department of Preventive Medicine in San Diego, CA, whom would you pick as your first audience to reveal your stunning findings that many morbidly obese people in an obesity clinic had been sexually abused during their childhood? A group relatively informed about obesity that would greet the new information with extreme interest, praise and applause? Natch.

So, in 1990, Felitti flew to Atlanta to give a speech to the members - many of them psychologists and psychiatrists -- of the North American Association for the Study of Obesity. The audience listened quietly and politely. When he finished, one of the experts stood up and blasted him. "He told me I was naïve to believe my patients, that it was commonly understood by those more familiar with such matters that these patient statements were fabrications to provide a cover explanation for failed lives!" 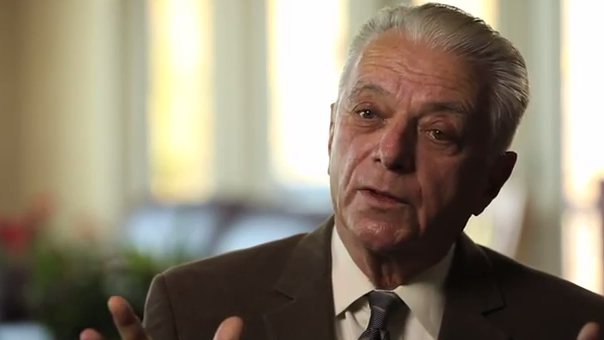 At dinner, Dr. David Williamson, an epidemiologist from the U.S. Centers for Disease Control and Prevention, sat next to the perplexed Felitti. Williamson was intrigued. He leaned over and "told me that people could always find fault with a study of a couple of hundred people," says Felitti, "but not if there were thousands, and from a general population, not a subset like an obesity program. I turned to him and said, 'That's not a problem.' " 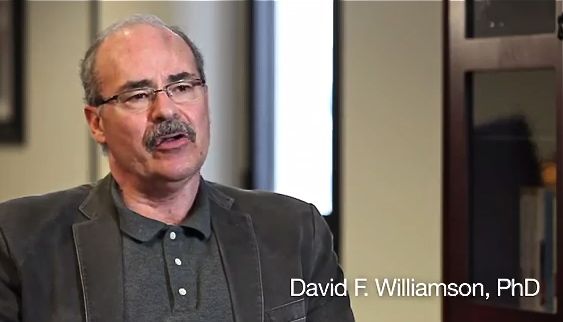 Williamson invited Felitti to meet with a small group of researchers at the Centers for Disease Control. Dr. Robert Anda, a medical epidemiologist was among them. If Felitti is the model for a TV show featuring a wise and stately chief physician who sits straight, stands straight, and keeps his personal feelings in check, Anda would be the dashing, young, brilliant researcher who wears his tie askew, slumps in chairs, laughs easily, loves to joke around, and puts his heart on his sleeve for all to see.

Anda began his career as a physician, but became intrigued with epidemiology and public health. When he met Felitti, he had been studying how depression and feelings of hopelessness affect coronary heart disease. He noticed that depression and hopelessness weren't random. "I became interested in going deeper, because I thought that there must be something beneath the behaviors that were generating them," says Anda. 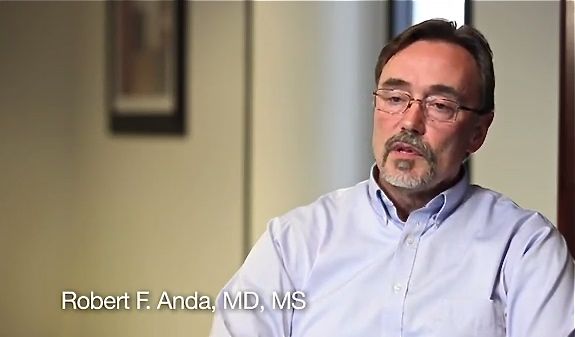 Kaiser Permanente in San Diego was a perfect place to do a mega-study. More than 50,000 members came through the department each year, for a comprehensive medical evaluation. Every person who came through the Department of Preventive Medicine filled out a detailed biopsychosocial (biomedical, psychological, social) medical questionnaire prior to undergoing a complete physical examination and extensive laboratory tests. It would be easy to add another set of questions. In two waves, Felitti and Anda asked 26,000 people who came through the department "if they would be interested in helping us understand how childhood events might affect adult health," says Felitti. Of those, 17,421 agreed.

Before they added the new trauma-oriented questions, Anda spent a year pouring through the research literature to learn about childhood trauma, and focused on the eight major types that patients had mentioned so often in Felitti's original study and whose individual consequences had been studied by other researchers. These eight included three types of abuse -- sexual, verbal and physical. And five types of family dysfunction -- a parent who's mentally ill or alcoholic, a mother who's a domestic violence victim, a family member who's been incarcerated, a loss of a parent through divorce or abandonment. He later added emotional and physical neglect, for a total of 10 types of adverse childhood experiences, or ACEs.

The initial surveys began in 1995 and continued through 1997, with the participants followed subsequently for more than fifteen years. "Everything we've published comes from that baseline survey of 17,421 people," says Anda, as well as what was learned by following those people for so long.

When the first results of the survey were due to come in, Anda was at home in Atlanta. Late in the evening, he logged into his computer to look at the findings. He was stunned. "I wept," he says. "I saw how much people had suffered and I wept."

This was the first time that researchers had looked at the effects of several types of trauma, rather than the consequences of just one. What the data revealed was mind-boggling.

The first shocker: There was a direct link between childhood trauma and adult onset of chronic disease, as well as mental illness, doing time in prison, and work issues, such as absenteeism. 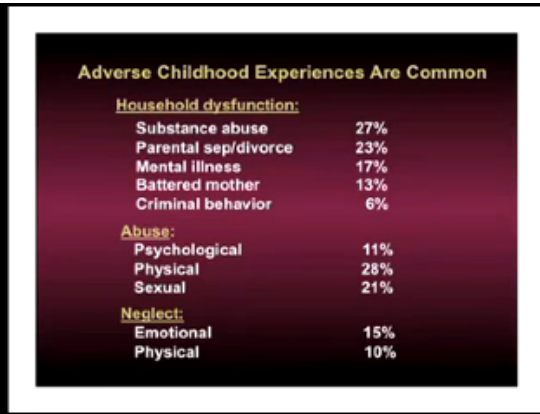 The second shocker: About two-thirds of the adults in the study had experienced one or more types of adverse childhood experiences. Of those, 87 percent had experienced 2 or more types. This showed that people who had an alcoholic father, for example, were likely to have also experienced physical abuse or verbal abuse. In other words, ACEs usually didn't happen in isolation.

The third shocker: More adverse childhood experiences resulted in a higher risk of medical, mental and social problems as an adult.

To explain this, Anda and Felitti developed a scoring system for ACEs. Each type of adverse childhood experience counted as one point. If a person had none of the events in her or his background, the ACE score was zero. If someone was verbally abused thousands of times during his or her childhood, but no other types of childhood trauma occurred, this counted as one point in the ACE score. If a person experienced verbal abuse, lived with a mentally ill mother and an alcoholic father, his ACE score was three.

Things start getting serious around an ACE score of 4. Compared with people with zero ACEs, those with four categories of ACEs had a 240 percent greater risk of hepatitis, were 390 percent more likely to have chronic obstructive pulmonary disease (emphysema or chronic bronchitis), and a 240 percent higher risk of a sexually-transmitted disease. 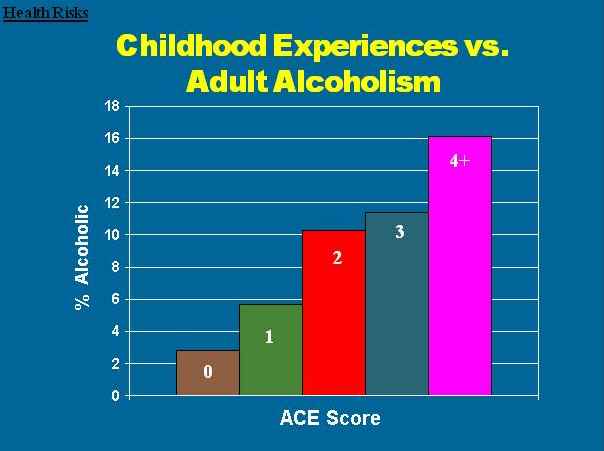 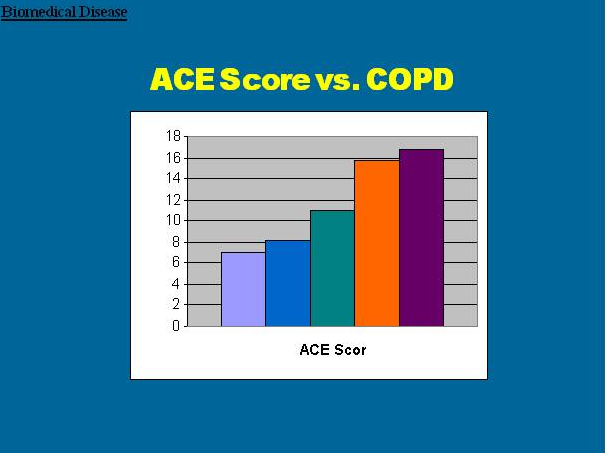 "Some of the increases are enormous and are of a size that you rarely ever see in health studies or epidemiological studies. It changed my thinking dramatically," says Anda. 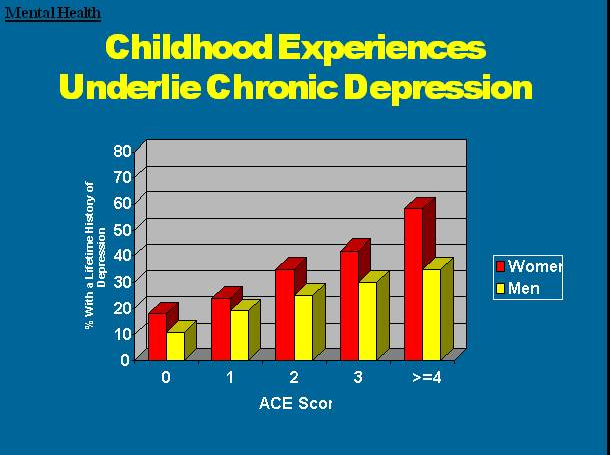 One in six people had an ACE score of 4 or more, and one in nine had an ACE score of 5 or more. This means that every physician probably sees several high ACE score patients every day, notes Felitti. "Typically, they are the most difficult, though the underpinnings will rarely be recognized."
The kicker was this: The ACE Study participants were average Americans. Eighty percent were white (including Latino), 10 percent black and 10 percent Asian. They were middle-class, middle-aged, and 74 percent were college-educated. Since they were members of Kaiser Permanente, they all had jobs and great health care. Their average age was 57.

Next: Part Three -- Changing the landscape of understanding human development