One need not be prophetic to sense a bad outcome for the U.S. war in Afghanistan. Almost nothing has gone by plan since the Bush administration joined forces with the Northern Alliance in 2001 to kick the Taliban out of Kabul and into the tribal territories of Pakistan.

What are the chances that the Obama administration's plan to turn over Afghan national security to the Afghan National Army (ANA) will turn out very much like the earlier plan the train up and equip the Iraqi army and turn security over to them in 2012 -- which then unraveled spectacularly just two years later?

The answer is close to 100% according to Chris Mason who writes:

... the outcome in Afghanistan... are not difficult to foresee, and there is not really any realistic doubt about this outcome. Everything else is whistling past the strategic graveyard and magical thinking.

A veteran of 15 years of work in and on Afghanistan, particularly focused on the development of the ANA and its operational culture, Mason has written a remarkable book published by the Strategic Studies Institute at the Army War College. It addresses the persistent failure of Washington to learn strategic lessons from Vietnam and Iraq. 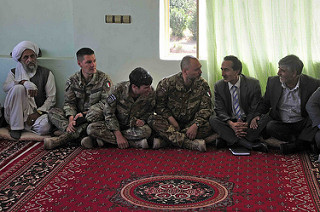 photo credit: Elders Shura in Shiavashan, a Commitment for Peace. via photopin (license)

The Iraqi Army, on paper, was twice the size of the ANA, excluding its reserves, with only about 60 percent as much territory to defend.

Mason argues that the Afghan National Army is radically too small for the defense of the country ... and more gravely:

...the all-volunteer ANA has double the desertion rate of the all-conscript ARVN... casualties are at an all-time high and rising... the number of recruits which can be found annually reached its maximum level and is starting to decline... the maximum recruiting level is now below the current level of annual attrition, and the ANA is shrinking.

The most serious deficit of the Afghan National Security Forces is not its lack of an air force, extreme over-reliance on weak and static police forces, small size, nonexistent logistics, pervasive drug abuse, or the attrition that runs near 50 percent per year in combat units in the south... it is its lack of motivation in comparison to the Taliban.

One of the primary lessons unlearned from Vietnam, Iraq, and Afghanistan is that soldiers in the armies we create, train, and equip are simply not willing to fight and die for weak, corrupt, illegitimate governments that we stand up in parallel, no matter how big they are or how much equipment we give them.

The purely military gains achieved at such terrible cost in our nation's blood and treasure in Vietnam, Afghanistan, and Iraq never came close to exhausting the enemy's manpower pool or his will to fight, and simply could not be sustained politically by illegitimate and dysfunctional state institutions...

...de facto partition [of Afghanistan] and ceasefire along a brokered line of control that could eventually become a negotiated de jure partition, with residual U.S. air power at Bagram and Shindand as the enforcer, creating an armed stand-off of the type in the Koreas today.

Mason is writing principally for a military audience. Therefore he admonishes the U.S. Army to refuse the mission of nation building in places where there is no history of either nationhood or successful state practice.

If a country has not reached a point where nation-building is no longer necessary, conventional military intervention involving occupation should be off the table, because failure in that environment is inevitable, as Vietnam, Iraq, and Afghanistan clearly prove.

...state-building [however] is possible, but is best done by civilians, and it takes between 70 and 100 years to go from poverty, illiteracy, and economic under-development to a liberal democracy with stable economic growth. The role of the military is to defend it, not to build it.

The U.S. military has been willing to engage in long and costly wars three times in the last half century in countries where local politics and social conditions doomed from the get go the possibility of achieving each war's political objectives. Famously the U.S. military is very proud of their 'can do' attitude and the preparedness that goes with it. In addition, we are lucky they prefer a stance of loyalty to the civilians who command them under the Constitution.

So what explains the ready enthusiasm of U.S. civilian leaders for commitment to doomed wars?

• For sure there is a plethora of 'arrogance of power' to be found in Washington and, related to that attitude, the ideology of 'American exceptionalism.'

• There is also the apparent requirements of retail politics: President Obama is clearly not fond of the wars he inherited from his predecessor, but he has never explained to the American people why these wars were wrong-headed from the beginning. Instead he has sought a 'successful conclusion' to the wars that would have U.S. troops (mostly) coming home and local national armies taking over the fight -- despite the manifest inconsistencies of this approach with realities on the ground.

• Perhaps it is the "the eternally recurring colossal cock-up" cited by Hugh Roberts in an excellent review article in The London Review of Books explaining the mistakes of European and American policies regarding the Syrian civil war:

The most charitable theory available, 'the eternally recurring colossal cock-up' theory of history, will do well enough. If a more sophisticated theory is required, I suggest we recall the assessment of C. Wright Mills when he spoke of US policy being made by 'crackpot realists', people who were entirely realistic about how to promote their careers inside the Beltway, and incorrigible crackpots when it came to formulating foreign policy.

These last two explanations for failure are a bit too cynical ... yet they serve as good reminders of the continuing need for deep reform of the ideology and practice of U.S. foreign policy. All the world's peoples (including Americans) deserve much better.