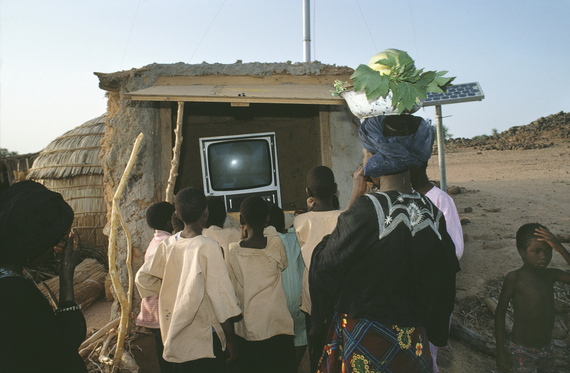 African households will watch the solar revolution -- because their TVs will be powered by it.

Not long ago Ghana made headlines as the government was forced to ration electricity supply just to ensure people could watch the World Cup. Now a new wave of new super-efficient appliances including TVs are set to transform the continent.

The Global Lighting and Energy Access Partnership (Global LEAP), just announced its semi-annual Global LEAP Awards, which highlight the best quality, most energy efficient and affordable appliances serving populations living beyond the reach of the electricity grid. This year's awards focused on TVs and fans. The finalists demonstrate just how advanced these technologies are becoming with a 24" TV drawing as little as 11 watts -- less than 20 percent of the power required for a traditional incandescent light bulb. That level of super efficiency is incredibly important for expending energy services across sub-Saharan Africa.

It turns out these super-efficient appliances are colliding with another radical technology transformation in the form of widespread, high quality, cheap solar home systems. These systems are serving those living beyond the reach of the grid and spreading like wildfire with dramatic sales figures and projections, backed by increasing investments. But this rapid progress isn't happening because of the falling price of solar. It was the advent of LED light bulbs which brought down the size of the entire system, and therefore the cost. If we extend the principle that super efficiency unlocks energy services for the poor up the energy ladder, we have the makings of a solar revolution.

The ability to deliver more services with less is really important because the vast majority of development gains, as measured by the Human Development Index (HDI), come within the first 2500 kWh per person per year. And this analysis doesn't even reflect the rise of super-efficient off-grid technologies -- or the fact that its energy services, not energy consumption, that drive the development benefits of energy access. That means with the advent of super-efficient appliances, and distributed solar to power them, we can power tremendous social and economic development faster than ever before without confining generations of people to the dark as they wait for a grid that may never arrive. 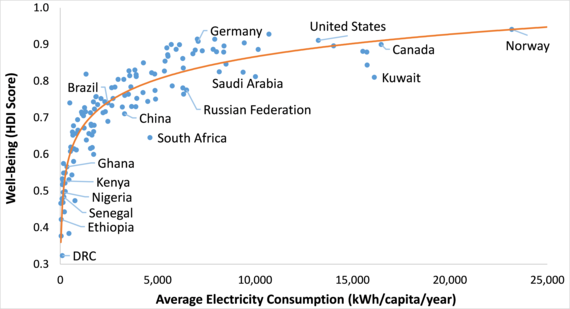 With more public support on the way super-efficient TVs are likely to be the beginning, not the end, of cutting-edge technologies that reach the African masses. Last week the White House announced that Power Africa's Beyond the Grid program is making $1.5 million investment in Global LEAP + RBF, a cool new program from CLASP, the U.S. Department of Energy, EnDev, IFC and others to reduce early-mover risk and demonstrate scale in the appliance market.

This is just the beginning. The consulting firm Dalberg Global Development Advisors recently projected that, with smart investments from the private sector and the right support from governments and multilaterals, the appliance market serving those living beyond the reach of the grid could grow to $4.7 billion a year by 2020. Which means during the next World Cup Ghanaian soccer fans can enjoy the game, and perhaps a cold beverage, thanks to a clean energy revolution.