The African Union is introducing the Africa Day for School Feeding on March 1 and has adopted home-grown school feeding as a continental strategy for enhancing the retention and performance of students while also bringing economic benefits to farmers and local communities. 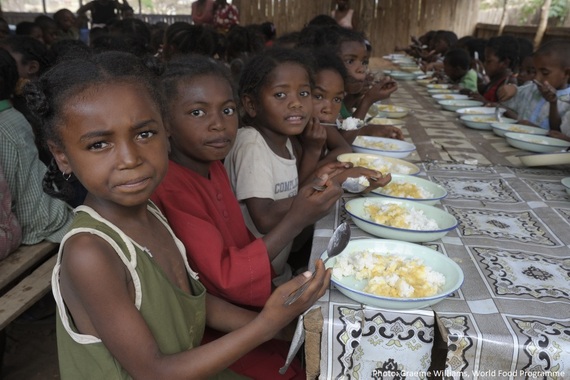 Africa is an immense and very diverse continent. If one considers its 55 countries, there is a wide range of realities and particularities that are often overlooked. In the United Nations' latest Human Development Report, for example, 12 African countries are considered to have a high or medium human development index (HDI), while at the same time some of the countries with the lowest HDI are also from the same continent. Given such variety in conditions, a single 'silver bullet' approach to setting policy can risk undermining local realities and missing the potential to foster ownership by the broader society.

Yet, when it comes to tackling food security and malnutrition, certain strategies have been proven to bring about results in very diverse settings, and school feeding is one of these strategies. Since the late 1960s, the United Nations' World Food Programme (WFP) has incorporated school feeding into its food assistance strategies in Africa. In recent years, these efforts have combined with an increased interest by African countries in developing home-grown school feeding programmes that are connected to local agriculture, as a strategy to tackle undernutrition, enhance students' performance and at the same time promote local development.

The WFP Centre of Excellence against Hunger in Brazil, a partnership between WFP and the Brazilian government, has been supporting governments in this endeavour since 2011 through South-South Cooperation, and there are remarkable results deriving from governments' commitments to develop their own school feeding programmes.

Niger's national programme is reaching over 190,000 students, with food procured from 7,000 local farmers. Mozambique set up a pilot project in 12 schools as a first step in the implementation of its national school feeding programme which is linked to smallholder farming. Other countries such as Benin have put in place strong normative and institutional frameworks and have carried out broad consultations with stakeholders to ensure involvement and ownership of new programmes. The Ethiopian School Feeding Task Force has engaged with the Brazilian government on how best to connect school feeding to other social protection programmes.

These efforts have now been taken up to the continental level by the African Union (AU), with a new push for national school feeding programmes made at the latest AU Summit on 31 January. The 54 Heads of State of the regional body decided to adopt school feeding as a strategy to enhance children's performance in schools, boost income generation and entrepreneurship in local communities.

The decision encouraged those countries that have school feeding programmes to continue their efforts. It invited other Member States to learn and adapt lessons from those running school feeding programmes so as to enhance access to and retention of children in school. It further called for the establishment of a multidisciplinary technical committee of African experts to undertake, with support from the WFP Centre of Excellence, a general study on the relevance and impact of school feeding in the African Union Member States.

The decision sets a new momentum for school feeding among African countries, as it endorses existing efforts and at the same time prepares the ground for building a body of evidence to inform and frame the development of a continental approach to the issue. In the framework of AU's Continental Education Strategy for Africa, school feeding should be the subject of a separate programme, if not a full implementation strategy, as foreseen in its guiding document.

This decision also bears historic importance in light of the clout the regional body carries as the embodiment of African peoples' aspirations. It brings renewed political commitment and may contribute to keeping school feeding high in governments' political agenda.

Furthermore, AU recognition of school feeding as a vector for social development may also facilitate the allocation of resources to such programmes in national budgets, and eventually lead to the creation of new funding mechanisms.

With these prospects ahead, the WFP Centre of Excellence against Hunger is eager to continue its partnership with African countries to assist them in moving forward in food security and achieving Zero Hunger.