Among the oldest saws in campaigns is that voter turnout will determine the election outcome. Of course this is true, but is has deeper meaning in light of a growing age gap that has emerged in recent elections.

While turnout rates are lower for the elderly in midterm elections compared to presidential elections, they do not drop off nearly as much as they do not the youth. According to the Census Bureau, the turnout rate of citizens age 65 and older was 63.1% in 2006 and 70.8% in 2008. 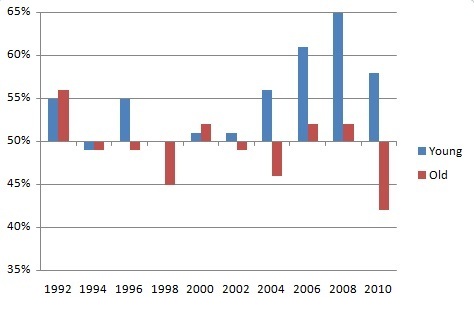 In 2010 the age gap was 16 percentage points, the largest on record. Now, because the youth tend to vote at low rates in midterm elections, this is a part of the Republican success in the 2010 election. It would be foolish to think that they will stay home in 2012. If we hypothetically apply support for Democratic House candidates in the 2010 election among various ages to the age distribution of the 2008 electorate, Democratic candidates would have received one percentage point more of the total vote. Some of those nail-biter contests won by Republican candidates would have likely been won by the Democratic candidates.

Smart politicians know that the 2010 electorate is unlikely to repeat itself in 2012. Expect them to adjust their policies and rhetoric accordingly if they plan to be reelected to another term in office. And to look beyond, expect the electorate to shift back towards the Republicans in 2014. If this age gap persists, and there is no reason to suspect it will not in the short run, we should observe a regular ebb and flow to the electoral fortunes of the political parties as young people move in and out of the electorate.

For those interested in this commentary and more, read "Voter Turnout in the 2010 Election" published in the on-line journal The Forum.