This morning I awoke to a series of emails which made me realize that the Information Age is dead and we are now in The Age of Noise, Clutter & Spying on Us.

And it would appear that adding broadband speeds just adds more garbage faster. But after I realized the extent to which they are tracking us, spying on us, this all just pissed me off, as it is clear it is getting worse.

The Age of Noise & Clutter

The noise is everywhere and it is cluttering up my life. Let me explain.

Pinterest, (which I joined because every time I put up a new article it places that pin on the graphics), keeps sending me 'New topics you might love'.

Now, I don't search for new topics, ever. And the machine has no idea what I might love. 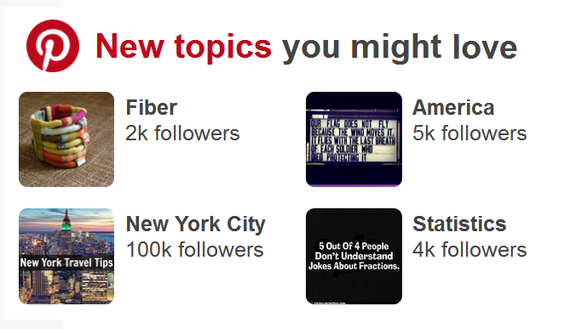 But this one was funny - Pinterest believes I might love pictures of "fiber" -- but when I click on it, it takes me to knitting and crocheting pictures. I sent the email to someone else and when they clicked on it, it took them to a page of healthy eating/fiber pictures.

Some much for the computer matching my 'likes', much less 'loves'. And even if it was related to 'fiber optics', I still wouldn't care.

A few emails down and it is from Linkedin, the business networking site. They are telling me that there are jobs available -- "Top job picks for you!" I'm not looking for a job. And these jobs are not something I would consider. I haven't programmed a computer for decades and I doubt I'd make a good Director of Technical Accounts for Verizon. 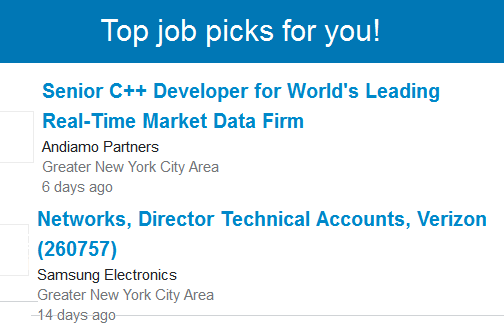 This 'keep in touch' marketing is everywhere and all it does is annoy me and it wastes my time.

As the Rolling Stones said in their song, "I Can't Get No Satisfaction" -- "some useless information supposed to fire my imagination".

And I've given these companies a privilege to enter my "Inbox" as opposed to this all just being dumped into the 'spam section', where I get hundreds of emails daily promising me millions of dollars or a new wonder drug, or it's just a virus or some other nasty malware, etc.

After thinking about how to shut off these emails, I find an 'unsubscribe" on Pinterest and it sends me to this:

I see the phrase "more Pinterest emails". I wonder how many different categories there are?

'Preferences' that are Garbage--The Pile-On

The idiot machines have taken over and we spend more and more time attempting to go around their endless stream of noise and clutter. Of course we can blame the idiot programmers who think that they have a 'preference' engine that works.

Take Netflix and my "because you watched" choices. "Amadeus" is the story of the composer Wolfgang Amadeus Mozart and how a jealous, hack composer is out to kill him. Robinson Crusoe is a remake of a famous tale of a man marooned on an island, played by Pierce Brosnan.

What do "The Roosevelts" have to do with Mozart? Or how does someone marooned on a mostly deserted island have anything to do Marilyn Monroe in "River of No Return"? Would Caruso have left the island if Marilyn had shown up?

I remember in the 1990's, there was a 900-number for horoscopes and one lazy information provider recorded 12 different messages and then would just rotate them through the different signs; Capricorn would hear the same message as a Leo, sooner or later. This feels more like that then 'my preferences'.

The Age of Spying on Us

But what really pissed me off was how we are being tracked, shadowed, and spied on.

A few months ago I did a search for an electric music keyboard for my brother, in the $200.00-400.00 range, which included a Casio and a Yamaha. 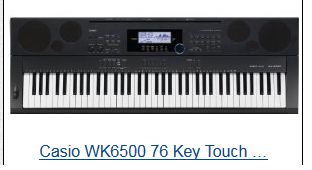 How could this be? Were they blanketing the Internet with this ad or somehow they were magically following me?

I posted on some lists: "This is not right. How do I shut it off, or is this a search thing or something else going on?"

And, why would I want to see a continuous stream of ads for the same keyboards after the search was done, is beyond me, but it kept reappearing.

I track down the culprit. On the top right side of a lot of these ads there is something that says 'AdChoices". This one advertisement is for Verizon, (and it's in Spanish) which 'found me' when I was reading a story on the San Jose Mercury News web page. 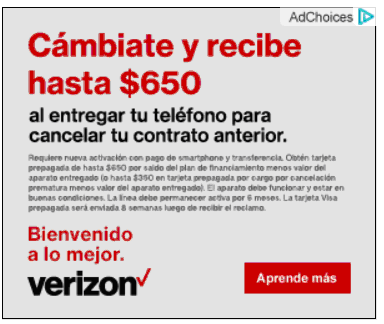 And this is what happens when you click on AdChoices. It was spying on me and while it claims it is about 'preferences', I don't even speak Spanish, among other things. 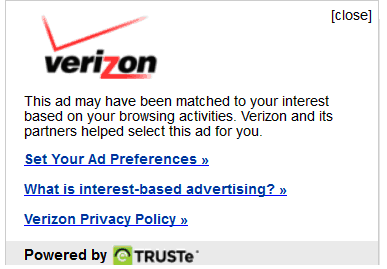 I click on the 'Set Your Ad Preferences' and I get to Truste, which shows 42 different services/companies/who are now tracking me.

I click to get rid of their tracking and it eliminates only 18 of the culprits; the rest show a question mark. 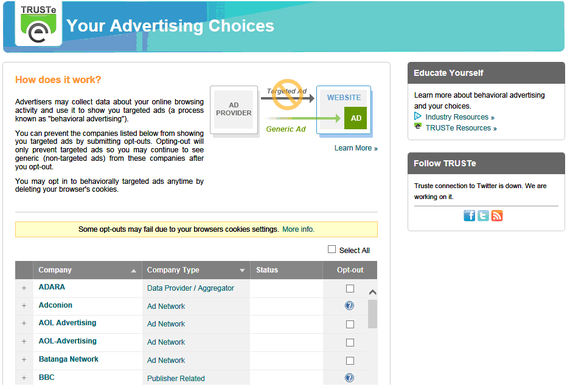 If you notice, it says that they are tracking the sites I have visited, and it is known as "behavioral advertising". And while you can't shut off the ads, they will be glad to just give you ads that are more randomly picked.

I.e., they are legally (maybe) spying on me, and then doing a profile. Who gave them the right to track me?

The keyboard ads that were appearing happened because they had tracked me. They then kept flashing the same exact product at me because, well, there's a software program who thinks it understands me; it knows my 'preferences'.

Shut It Off Completely?

I end up at this page -- the industry association, Digital Advertising Alliance -- and they are doing me a favor that they are attempting to get rid of the clutter by providing me with 'relevant advertising'. 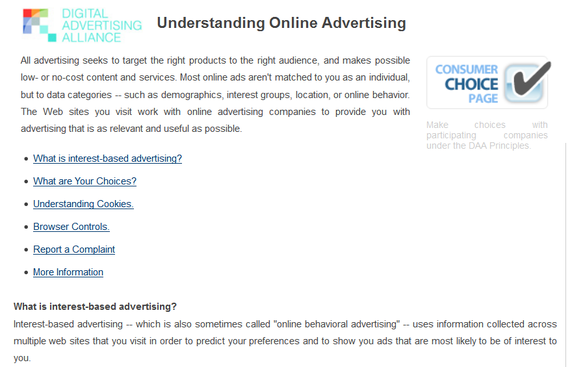 It might be time to design a free 'behavioral response' program that clicks on the ads 1,000,000 times each, as the advertisers pay for this -- and let them start screaming at the companies offering these services. I assume they have some other program that would stop it, but I'd get some satisfaction in bombarding them with 'useless information'.

I also found that there are 'privacy' settings. This is the list that showed up when I just put in the term 'privacy setting' into Google -- Do I have to go through every service and device and operating system to deal with the privacy settings? 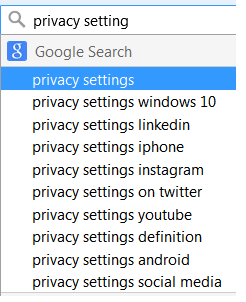 I admit freely that I just use this stuff and am just another naïve consumer, like the majority of you reading this.

When they enter my Internet browser or computer, are they entering my home, my premises? Or is the 'Internet' just a public space? If the Internet is "Title II" and telecommunications, as the FCC suggests in the Net Neutrality ruling, then these companies are violating the basic rights of "common carriage", as you can not just spy on someone without a legal court-ordered warrant -- i.e.; they can't tap your phone conversations or track your regular phone calls.

And this is not some 'meta-data' about lots of people being averaged or profiled; this is a specific attack on each one of us, and I don't want someone spying on me. Period.

It is clear, then, that we have to take added actions to stop this as an individual instead of -- we have rights that are in place that shouldn't allow this.