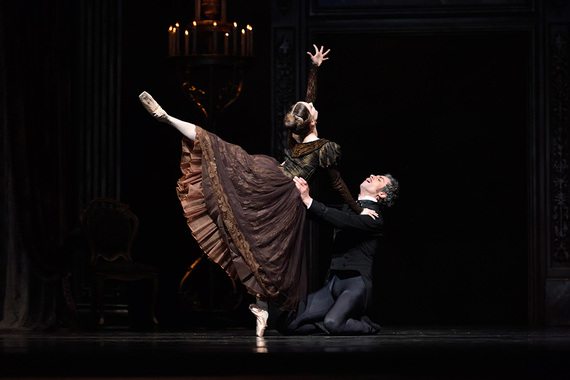 On Sunday afternoon, at the close of the tragedy of Onegin, when Tatiana, wife to the noble Prince Gremin, ripped up the bounder Eugene Onegin's pitiful love letter and ordered him out of her boudoir, San Francisco's War Memorial Opera House erupted in cheers.

These days, a powerful woman scorned by an equally powerful man has several options to consider, including the release of an hour-long accusatory music video in which she races through the streets smashing things with a baseball bat. In 19th century St. Petersburg, ripping up love letters served the same purpose - provided one did it with the fire that Yuan Yuan Tan brought to the role of the mature Tatiana on Sunday. Her transformation from daydreaming teenage bookworm to poised, worldly princess was utterly convincing and thrilling to watch.

The delicate but steely Tan was manhandled magnificently by Luke Ingham in the panoply of unusual and daring lifts for which choreographer John Cranko was justly famed. Had Cranko not died so tragically young, we would have called him on the carpet to explain why the final pas de deux - in which Tatiana is meant to reject Onegin's advances - appears to portray a no-holds-barred sexual encounter.

No doubt audiences would protest any watering-down of this juicy confrontation.

Cranko's Onegin is a not-quite-faithful translation of Pushkin's immortal novel in verse. In that final rendezvous, the novel's Tatiana calls out Onegin's hypocrisy, reminding him that he spurned her many years earlier when she was a naive country girl and he was a haughty urban roué. She muses whether the upgrade in her social status since her marriage to a prince has lured him back. But there is no reckless love-making in the novel, not even a hug. Onegin merely kneels before her and kisses her hand avidly. She throws him some shade but does not shred his pathetic letter. She briefly confesses that she still loves him, but tells him she intends to be true to her husband, and, with dignity, she commands him, "Pray you, leave me now." Her speech is damning on paper, and established Tatiana as an archetype of Russian womanhood - emotionally vulnerable, yet wise and principled - but that sort of nuance gets lost in ballet.

With an infallible sense of the theatrical, Cranko cranked up the temperature on the drama to telenovela feverishness. Every step means something (unlike so much of contemporary ballet) even if it doesn't mean exactly what Pushkin wrote. Perhaps Tatiana and Onegin are dancing their hidden longings in Act III, just as they danced her youthful, starry-eyed dream in Act I.

Many a ballerina has impaled herself on the role of Tatiana, overacting into embarrassing caricature. But Tan reins in the soap operatics, conveying emotions primarily through the lush sweep of arms and legs that seem to extend to infinity, reckless and expressive backbends (still luxurious after 20 years in this physically punishing business) and the eloquent articulation of her insteps.

Overacting was not Ingham's problem; outside of the pas de deux he appeared haunted - not by his character's deep flaws, but by the demands of his solo variations. His preparations for pirouette were visibly labored and his leaps lacked the vigor of his sexual acrobatics with Tan.

He was entirely outdanced by Joseph Walsh, in the supporting role of Lensky, who tossed off his jumps and turns with an effortless buoyancy. Walsh traced the arc of the central tragedy with brilliant clarity - the slaughter of boyish idealism by overblown machismo. The elaborate charade of letter-ripping by Tatiana and Onegin is only peripheral to the careless and dangerous games men play in the name of honor. Bored by provincial country life, Onegin flirts with his friend Lensky's fiancée. Wounded, Lensky challenges him to a duel and the reluctant Onegin shoots him dead. Lensky's anguished pre-dawn solo opens with a very fine series of prayerful arabesques piquées. And, as with the greatest ballet jumpers, it matters not simply how high he soars but how he finishes a jump: Walsh grounds his landings impeccably, in a fondu of poetic misery. 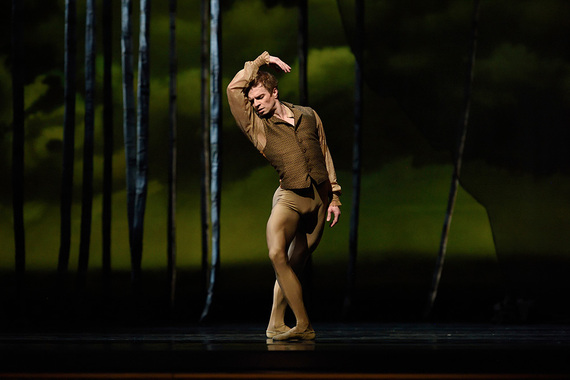 As Lensky's love interest, Tatiana's flighty sister, Olga, corps de ballet newcomer Jahna Frantziskonis made a creditable debut, winsome and self-assured. Though her scurrying about with Tatiana, trying to prevent the preposterous duel, is one of several gratuitous distractions in Cranko's otherwise suspenseful narrative-building. 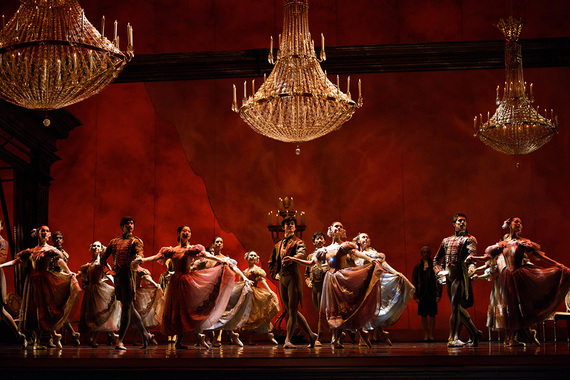 The drama threatens to get all Gone-With-The-Windy but is saved by the courtly sincerity of Tiit Helimets in the role of Prince Gremin. His tender attentiveness to Tatiana, which she touchingly reciprocates, scores a home run for marital fidelity. In their otherwise decorous duet in the magnificent blood red-stained ballroom, he repeatedly caresses her ankles, which she flaunts daintily in a tight fifth position on pointe, then boldly in dramatic tendu and piqué. Not all passion is transgressive, Cranko suggests. Beneath the social correctness, the enormous tiara and chandelier earrings dripping with diamonds, ecstasy can thrive.