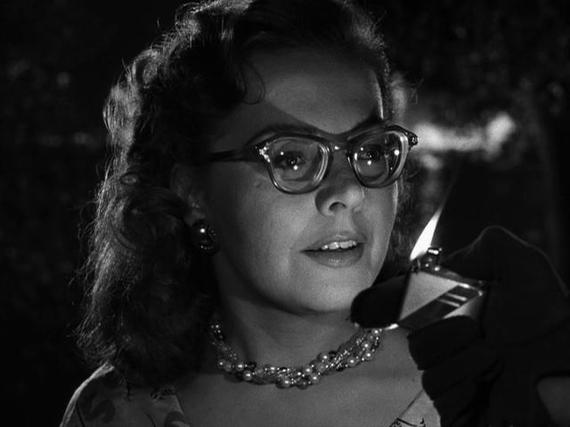 I accidentally came across one of my favorite movies the other day airing on TCM - Strangers on a Train. It's a brilliant Hitchcock suspense thriller from 1951. Seeing the film again reminded me of an odd series of events that happened involving one of the film's stars - Laura Elliot and TV star Kasey Rogers.

I was having lunch many years ago with a friend of mine, Kasey Rogers, who is best known for her role as Louise Tate on Bewitched. I met Kasey through another friend of mine who took me as her date to Kasey's annual Halloween party. An interesting cast of characters attended this particular party, including some Bewitched cast members - the guy who played Dr. Bombay, the woman who played Mrs. Kravitz, Betty, Darrin's secretary, and Rose Marie from The Dick Van Dyke Show. On Kasey's wall were the two paintings from her classic Bewitched episode where Darrin paints a portrait of Louise -but Endora interferes and magically causes Darrin to create a hideous portrait instead. Those paintings are two of the most famous props from the series.

Anyway, at lunch, Kasey and I were talking and somehow Alfred Hitchcock's name was mentioned. Kasey then mentioned that she had a wonderful time working with Hitchcock. My jaw dropped open.

"When did you work with Hitch?", I asked.

"I had a starring role in Strangers on a Train, Kasey replied. "It was one of my first movies."

Now, I had seen Strangers on a Train countless times, both the American and the British versions, and there was no Kasey Rogers in that movie. Marion Lorne, the woman who played Aunt Clara on Bewitched was in the film in a supporting role as Robert Walker's mother. The film focuses on two men who meet on a train and decide to switch murders - amid some very homoerotic undertones. Robert Walker will kill Farley Granger's wife, Miriam, played by Laura Elliot, and Granger will kill Walker's father. Their theory is that no one would tie them to the murders since neither man has any connection with either of the victims.

The scenes featuring the incredible bitch Miriam, played by Elliot in the film are stunningly beautiful yet haunting and tensely noir at the same time. Her horn-rimmed glasses splash across her face and the air of evil around her is palpable. You could almost forgive Farley Granger for wanting her dead. The breathtaking death scene at the carousel, while Miriam and her friends are singing, And The Band Played On, with Miriam coyly teasing Robert Walker to follow her are a visual feast. And once Miriam is brutally murdered, the final scene of the cracked lenses of her eyeglasses is one of the most remembered visuals in all of film history. There was a sense of justice served when Miriam was killed. She was such a disgusting woman. And because she threatened to expose Farley Granger's transgression, yes, Miriam deserved to die.

What Kasey said next left me paralyzed in disbelief.

I was literally stunned. Never in a million years would I have connected Kasey to the character of Miriam. It was just impossible.

"I was going by the name Laura Elliot back then", Kasey disclosed.

That's the mark of a truly great actress. She's in a film a friend has watched countless times and I couldn't even identify her in the movie.

We lost Kasey in 2006. But she left a fine legacy of film and TV work. I literally get goosebumps now whenever I watch Strangers on a Train. It still boggles my mind that Kasey played a key role in one of the greatest suspense films in history. And I was so blind as not to recognize her!